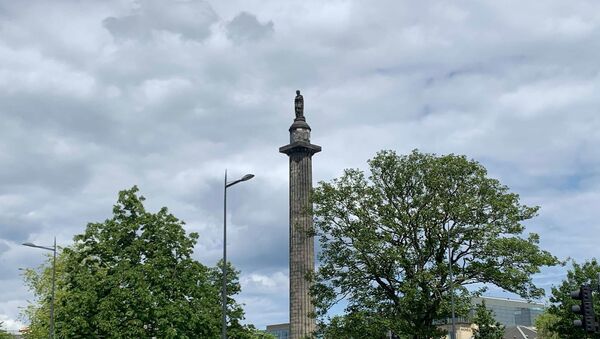 Jason Dunn
All materialsWrite to the author
The United Kingdom has, alongside the US, become embroiled in controversy surrounding statues of historic figures involved in Britain's former slave trade. Black Lives Matter protesters in Scotland have centered disapproval toward the Melville Monument in Edinburgh's St Andrews Square.

Hundreds turned out in St Andrews Square, Edinburgh, on Saturday, to demand the removal of a statue of Henry Dundas standing  atop of the Melville Monument.

The 'Black Lives Matter - Justice for Slaves' demonstration - set to align with other protests across the UK - began just after 12:00 p.m. around the monument that commemorates Dundas, a prominent Scottish politician who in 1792 participated in delaying the abolition of the slave trade. 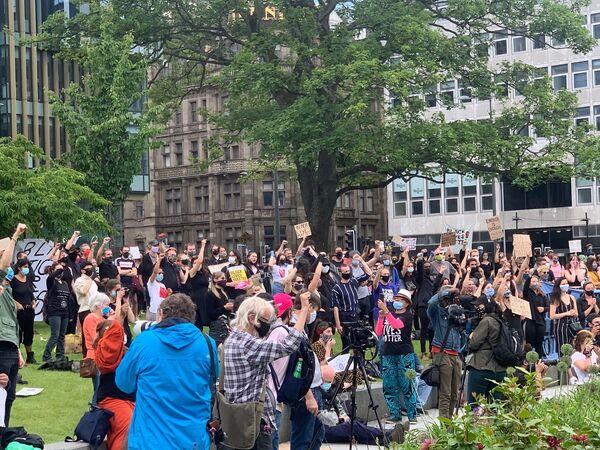 Speakers and artists are calling for the removal of the statue, as it honours a figure known his for role in the British Empire's East India Company, which trafficked and enslaved people from Africa, transporting them in the millions to Caribbean sugar plantations.

Cries of "Black lives matter!" and "Tell the truth!", as well as singing, could be heard from the large crowd as organisers expressed solidarity with other anti-racism and anti-police-brutality demonstrations taking place in the UK and across the world.

“This is Jimmy Savile times a hundred thousand. It is a f***ing embarrassment", he said.

Lizzie, 27, who helped organise the rally, explained that their aim was to see the removal of all statues across the country that "celebrate" historical figures involved in Britain's slave trade.

"One thing that I think personally would help to change and shape it for the next generation is to get it in the school curriculum," she said, adding, "I grew up here and I do not remember being taught anything to do with black history in Scotland or the UK. Modern-day racism, nationalism, and fascism is definitely connected".

"If we don't have this movement, nothing will change. We need to teach the next generation a better way of life".

While Lizzie opposed the compromise placement of an explanatory plaque on the monument, she said that the removal of the state would not equate to an erosion of history, as Dundas House - originally the private residence of Sir Lawrence Dundas - would remain standing. 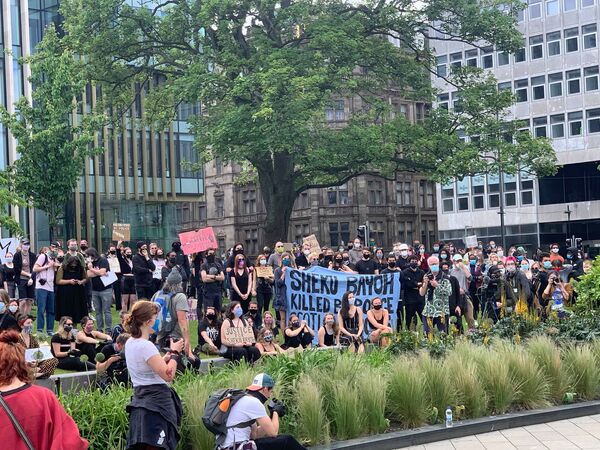 The John Maclean Society, a Marxist organisation in Scotland, said that they "primarily" came to St Andrew's Square to support the Black Lives Matter movement, but also to point out that "the fight against racism is linked to the fight against capitalism". 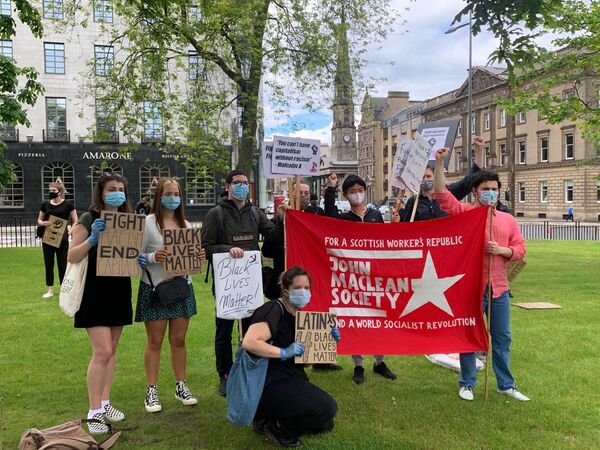 Ross Walker, an activist for the group, said that "capitalism breeds racism".

"British capitalism has very much been based on slavery and the establishment likes to promote patriotism to divide the working class".

Walker said that he supports the removal of statues of those involved in enslavement but doesn't see it as sufficient in tackling the larger problem of racism in the UK.

"It's not about this individual statue or this individual TV program. What we want is education about slavery and imperialism". "Conservatives and even Liberals try to make it about culture. What people want is economic justice", he said.

A heavy police presence cordoned off the BLM rally from a separate counter-rally by a pro-union organisation calling itself 'A Force for Good', led by Alistair McConnachie, the group's founder and director, who was kicked out of the UK Independence Party (UKIP) for his consistent denial of the 20th century Jewish Holocaust in Nazi Germany. 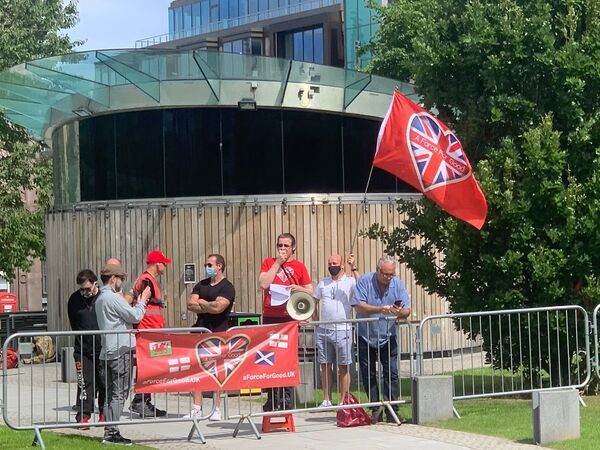 Prior to the protest, a representative of McConnachie's group said in a Facebook live video that his people were “standing up for Scotland and Britain’s proud history”.

McConnachie read what he termed a 'Dundas Declaration', claiming that "smears" regarding the historic character's role in delaying the abolition of slavery were in some way designed to "change the nature" of British society.

Using a loudspeaker, McConnachie claimed that Dundas helped end slavery by the latter's use of a "gradual" compromise with those in parliament who otherwise would not have voted for the 1807 bill. 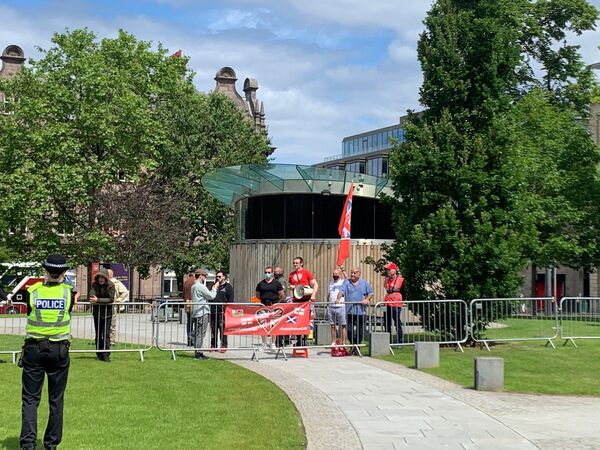 McConnachie lauded the history of the British Empire and its Navy in fighting regimes which continued to practice slavery, as some supporters of his group waved a Union Jack and sang 'Rule Britannia'.

​The unionist crowd exchanged abuse with a small section of BLM activists, brandishing anti-fascism banners. Both sides, however, remained peaceful. McConnachie and his supporters were later escorted away by police after being heckled by demonstrators. 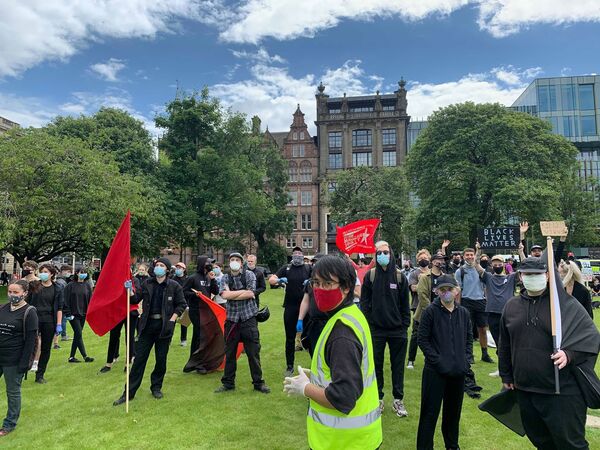 A Microcosm of the Nation?

Following a large BLM demonstration under Arthurs Seat on 7th June, the Edinburgh City Council voted last week for the addition of a plaque to the Melville Monument honouring those who died as a result of the actions of Dundas.

The discussion over the statue in Edinburgh reflects controversy which has swept across the UK around statues of historical figures involved in enslavement and colonialism. Black Lives Matter members have toppled and defaced some statues, including the removal of a statue of slaver Edward Colston in Bristol, which was dumped into the river. 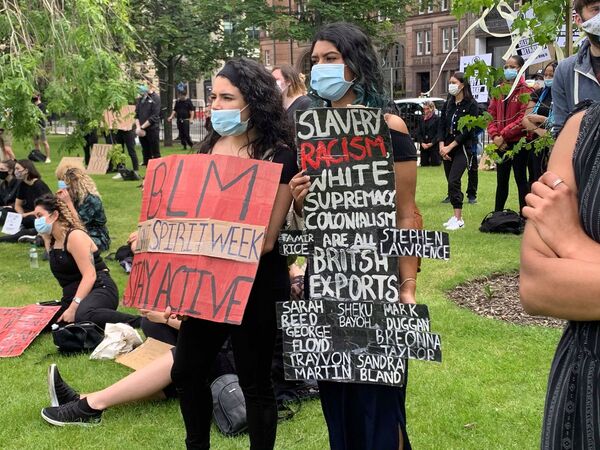 Others defending the statues claimed that they were threatened by crowds of demonstrators. Some noted that that history should not be erased, however uncomfortable the story behind the statue.

Black Lives Matter protests have again flared up in recent weeks, against racism and police brutality, following the death of an unarmed African-American man, George Floyd, in the United States at the hands of white police officers.

vargus
21 June 2020, 05:16 GMT2
000000
Removal of Henry Dundas would permit placement of a John Maclean statue. But few Scots know anything about Maclean. Marxist leaders are marginalized to oblivion by mainstream Scottish society.