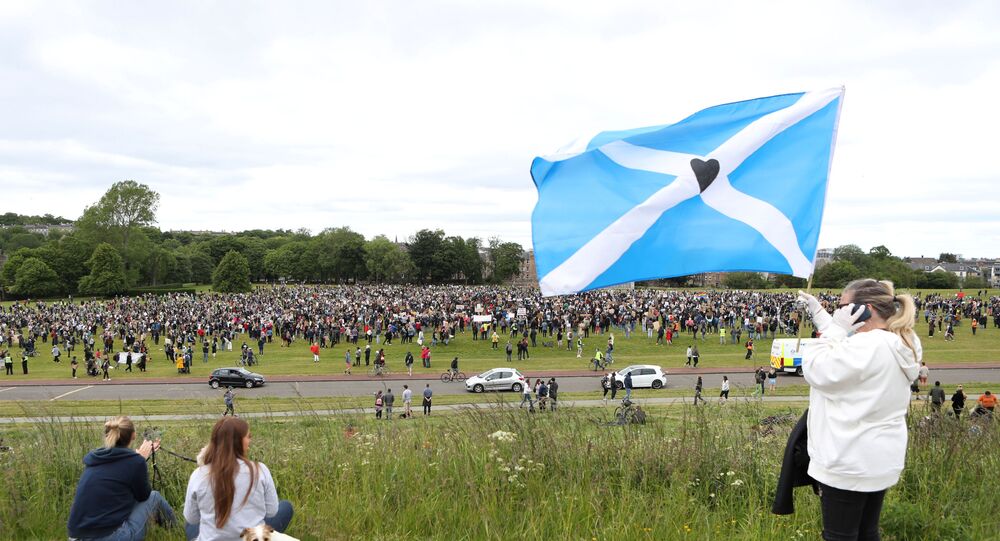 The debate over the glorification of historical figures involved in Britain's slave trade and colonial era has reached Scotland, as some anti-racist campaigners have demanded the removal of the Henry Dundas statue in St Andrews square.

A descendent of Scottish aristocrat Henry Dundas hit back against accusations that his ancestor supported slavery and said that the practice in the UK would have been abolished decades later if not for his distant relative, the BBC reported on Sunday

Bobby Dundas the 10th Viscount Melville, spoke out as part of an ongoing debate about an 1827 statue of Henry Dundas which stands in the centre of Edinburgh, Scotland.

#OTD 1811, Henry Dundas, Viscount Melville died. A controversial figure, he dominated Scottish politics, served as Minister of War during the French Revolutionary War and was the last person to be impeached by the House of Lords. His monument is in St Andrews Square, Edinburgh. pic.twitter.com/KHa2Kx2n4S

​He argued that the 1st Viscount, who added the word 'gradual' in Wilberforce's 1792 abolition bill which ended slavery in the UK, was not, in fact, a supporter of the practice but had to make concessions to get it through parliament.

Experts have argued that the "gradualist" approach to ending slavery delayed its abolition by around 15 years. The 1st Viscount, however, says that had it not been for the insertion of the caveat, not enough MPs would have voted to end the trade at all.

Dundas said that "any attempt to... [give] people the idea he was in favour of slavery would be a profound injustice". If not for Dundas' addition, slavery "could have been about for decades to come", he argued.

He said that his ancestor was a "politician of vision and integrity" with "no personal involvement in the slave trade".

Last Thursday, Edinburgh City Council proposed adding a plaque to the 140-foot column in St Andrews Square on which the statue stands, describing Henry Dundas as "instrumental in deferring the abolition of the Atlantic slave trade".

The 10th Viscount, who is a member of the panel tasked with deciding the plaque's contents, said that a plaque would simply "go on the side of a bit of stone".

"This is a very controversial period in Scottish history and there needs to be wider information available", he said.

The proposed text of the plaque would describe him as a "contentious figure" and explain the "voluntary" source of funding for the column.

"Despite this, the monument before you to Henry Dundas was funded by voluntary contribution from officers, petty officers, seamen and marines and erected in 1821, with the statue placed on top in 1827", the proposed text says.

"In 2020 this was dedicated to the memory of the more than half a million Africans whose enslavement was a consequence of Henry Dundas's actions."

Edinburgh Council has published the text of the plaque that will be added to the Henry Dundas monument in Edinburgh.

I still agree with @AdamRamsay that Dundas belongs face down in the dirt. https://t.co/Ok8iLGqiYX pic.twitter.com/jbvSTCuQDv

​The controversy comes as the United Kingdom is embroiled in a debate over statues of historical figures which were involved in the slave trade or held racist views.

In Bristol, a statue of the slaver Edward Colston was taken down and removed by Black Lives Matter (BLM) demonstrators.

Last weekend, a rally in Edinburgh in solidarity with the BLM protests broke out in response to police brutality in the United States, where some demonstrators called for the removal of the Dundas effigy.