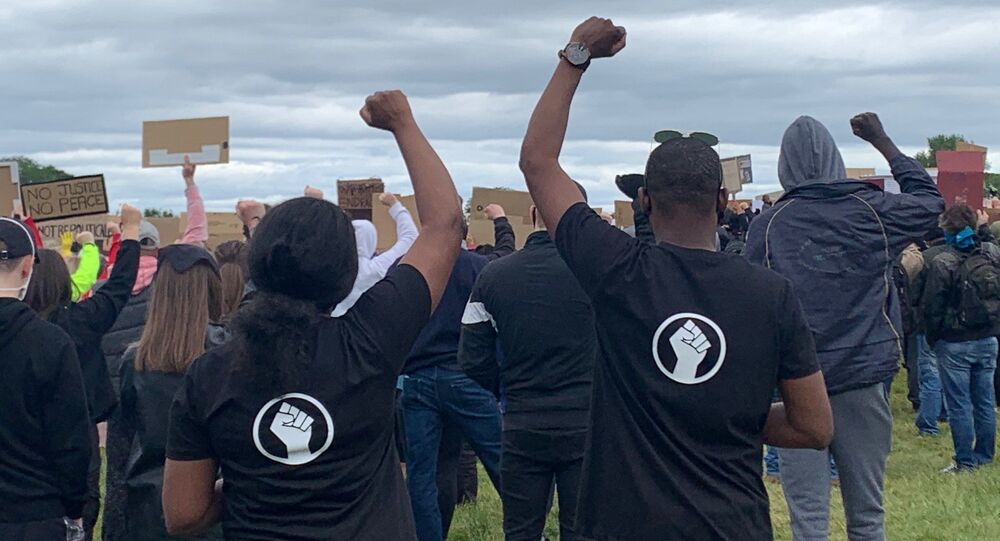 Demonstrations have broken out across the United Kingdom in support of protests in the United States against police brutality and racism following the death of an African American man at the hands of law enforcement.

Thousands turned out in Edinburgh to show solidarity with the Black Lives Matter (BLM) movement on Sunday.

Taking advantage of a break in the consistent rainfall over the preceding week, demonstrators flocked to Holyrood Park in a peaceful display of opposition to racism and police brutality.

With strict enforcement of social distancing and face-covering measures, the scenic protest at the base of Arthurs Seat stands in stark contrast to the chaotic scenes in London and Manchester the day before.

Cynthia Gentle, activist, organiser and musician from Edinburgh commented prior to the event that “we desperately need to start a conversation about how we educate ourselves to stop the institutionalised and covert racism in this country”.

“We have to stand and be extra loud, we have to raise our voices and condemn the murder of another black person, George Floyd, by an institution which was meant to protect him”, she said.

Highlighting the death of Sheku Bayoh, a black man who died while held in custody by Scottish law enforcement in 2015, Cynthia explained that disparity in racial relations and violence by police is not unique to the United States.

The demonstrations come in spite of First Minister Nicola Sturgeon’s warnings not to attend mass rallies.

A series of speakers and artists from the black community turned out to raise awareness of personal experiences of racism throughout Scotland and in opposition to police brutality, met with mass enthusiasm from the crowd.

Throughout the UK, protests have kicked off in response to the killing of George Floyd - an African American Man who died at the hands of a United States police officer.

Edinburgh in solidarity with Black Lives Matter extended their frustrations not just towards the United States but made clear their opposition to “systemic racism” in the UK and Scotland in particular.

Benitha Iradukunda, 23, an activist and member of the organisation team, said that she had come out to “raise awareness that black lives do matter, especially for black lives in Scotland”.

“Racism is happening here in Scotland, I've experienced it first-hand myself because I've grown up here in schools, colleges, and university”.

"A lot of people forget about black people living in Scotland … even in the UK I feel like black people are only recognised down south so it’s very important to make sure that our Scottish voices are heard", she said.

Benitha stressed that there is “injustice in our system itself”, in reference to the death of Sheku Bayoh.

“People need to learn that Scotland was involved in the slave trade and we need to teach that in the history curriculum and that Scotland is not innocent”, she added.

“Education is power, knowledge is power. If we can teach people about the good things in our history, what about the bad things?”

When asked if she had experienced any personal discrimination at the hands of the police, she confirmed that the police had refused to believe her after issuing a complaint of racial aggression.

Emmanuel, 25, said that he attended the protest because “I am black and we need to fight against racism”.

“We have been oppressed for hundreds, thousands of years and people only want to care about it when someone has died but people’s lives matter”.

“We need to fight for our lives. We are here to show the world that we matter and we do have a value”, he said.

“The world is built on black shoulders. All over Scotland, all over the UK, every single building you see here is money that has been put by black people through slavery”.

He called on people “especially white people” to recognise that they have a “privilege” and that the problem of racism is worldwide and systematic.

In reference to Ahmaud Arbery - a black man who was shot in February was fatally shot while jogging in Georgia, US - Emmanuel highlighted the presumption of criminality for being black.

“It seems like something has to happen in America for the world to wake up”, said Bruno, a fellow protestor.

Jose, 26, who came to support the demonstration from Lisbon Portugal said that “nobody should beg to breathe. I don’t care about the colour, that is a right”.

“My friends [in Portugal] were protesting for the same reason as we are protesting here against police brutality".

“I’m grateful to be here alongside my brothers to fight for change", he said.

While Scotland lauds its own dedication to racial equality and Sturgeon has overtly said this week that it is “hard to not conclude” that President Trump is a racist, the history of the capital city is mired in the international slave trade.

The nearly 40-ft tall statue of Henry Dundas, 1st Viscount Melville, stands in Edinburgh’s St. Andrews Sq. - Champion of the Scottish Enlightenment and President of the Board of Control over the East India Company.

On the subject of racist UK monuments, there's this one in Edinburgh. It's in St Andrew Square, so you'd be forgiven for assuming it's St Andrew. It's actually Henry Dundas, 1st Viscount Melville, a Tory famous for obstructing the abolition of the slave trade for decades. pic.twitter.com/xL72cYqXUD

​Dundas stands as a totem of Scotland’s ruling class and its role in the commodification of black bodies. The Secretary of State for War used his political power and influence to scupper Wilberforce’s attempt to abolish the slave trade in 1792, delaying its end by 15 years.

Henry’s cousin, Lawrence Dundas lived in what is now the Royal Bank of Scotland’s official registered office. Dundas House served as the residency for George Dundas, who owned slave plantations in both Dominica and Grenada.

Outside of the build stands another Dundas familial statue of John Hope, 4th Earl of Hopetoun, who organised the crushing of the slave revolution against French rule in Grenada between 1795-6.

Despite the role of Scottish plantation owners in British colonies, there is a concurrent exchange of anti-racist politics across the Atlantic.

Fredrick Douglass - the former slave and prominent African-American campaigner for the emancipation of slaves - lived in Edinburgh between 1846-7. Douglass referenced the Scottish capital as intrinsic to his journey from bondage to freedom.

“Everything is so different here from what I have been accustomed to in the United States. No insults to encounter – no prejudice to encounter, but all is smooth. I am treated as a man an equal brother. My color instead of being a barrier to social equality – is not thought of as such”, he wrote in a letter, 1846.

An excellent display of Frederick Douglass and his work in Scotland by @natlibscot #edinburgh #BlackHistoryMonth #US #history pic.twitter.com/kCSWcj9o5L

​Chattel slavery has ended in both the United States and Scotland. But the explosion of the solidarity and BLM campaigns across the world following the death of George Floyd shows that for many, the scars of history are still sore.