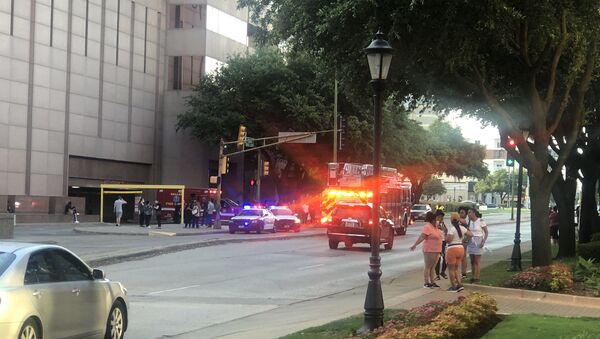 One person has been taken to hospital in unknown condition after a shooting at the Galleria shopping mall in Dallas. An investigation is ongoing, and police are searching the mall for the suspect.

A shooting was reported at the Galleria shopping mall in Dallas, Texas, on Tuesday, with over a dozen police units responding to the incident, according to local media. Witnesses reported that some shops went on lockdown while mall visitors ran for cover.

Dallas police said that the suspect has not yet been found, also confirming that one person was transferred to a hospital in unknown condition. The police also noted that this was no longer active shooter case.

One person was shot inside of the Galleria Mall. The suspect is currently at large at this time. DFR transported the complainant to Parkland Hospital, unknown condition. Officers are reviewing the video cameras and searching the mall for the suspect. Not an active shooter case.

​The mall has reportedly been evacuated. Earlier, reports said that one person was injured during the shooting.

Update 3 Galleria mall in Dallas has been evacuated. Customers heard gunshots and ran out. Police at last check were still searching for shooter. 1 person injured. Ambulance left the scene with lights and sirens. pic.twitter.com/Y9ujXlU2YC

​Videos showing an alleged witness of the incident, who said to have heard "maybe nine gunshots" appeared on social media, as reports say that police officers are checking every store in the mall, searching for the gunman.

Update 4 sources say officers are searching each store one by one in the Galleria mall in Dallas looking for person who fired multiple shots. 1 injury. Here’s an interview with a customer who was inside at the time pic.twitter.com/ohxGDSXZRq

​Other reports suggested that the shooting might have been a result of a confrontation of the two people in the food court, providing video that show a heavy police presence in the area.

Update 5 sources say shooting incident at Galleria mall started as a dispute between 2 people. One person wounded and was able to walk out of mall to an ambulance. DPD flooded with 911 calls from stores such as Express and Forever 21 where people were huddling and taking cover pic.twitter.com/nAMzzGBsO8

#BREAKING Shooting at @GalleriaDallas. Early info from sources tells us shots were fired in the food court. May have been a confrontation between two people. Heavy police, fire, and EMS activity. @wfaa pic.twitter.com/nZ97z4zQRV

Twitter users shared videos allegedly filmed near the site after they received a phone call from a relative who was in the mall when the incident took place.

I was Streaming and got a call from my mother there is an Active Shooter at Galleria Mall in Dallas Tx right WTF!!! We lookin For my family broooooo this cant be happenin pic.twitter.com/wtwmsnh6uJ