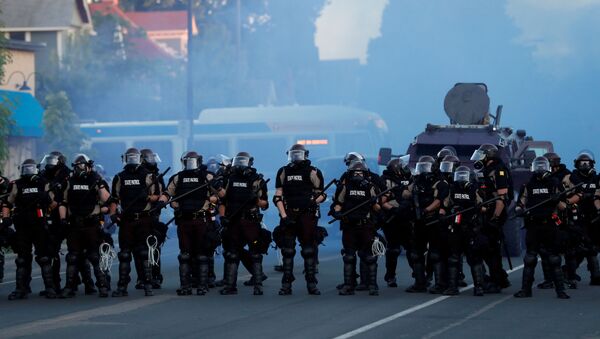 © REUTERS / Lucas Jackson
Subscribe
Minneapolis is where the now nationwide protests against police brutality began, after African-American man George Floyd was killed by a white police officer Derek Chauvin, who knelt on his neck on the ground for nearly nine minutes.

The City Council of Minneapolis has pledged to disband the Minneapolis Police Department, with the nine members making a veto-proof majority to support the decision. They also promised to come up with a new community-led system for public safety. Eight of the thirteen Council members delivered the statement to the residents of Minneapolis on Sunday.

Thank you to the thousands of community members who have raised your voices to demand change. Thank you to @reclaimtheblock & @BlackVisionsMN for inviting us in. Today is a beginning. Minneapolis: we invite you to be part of building a system so our whole community is safe. https://t.co/fMaCw8HfyH

​Announcing the decisions, Minneapolis City Council President Lisa Bender acknowledged that the "existing system of policing and public safety is not keeping our communities safe".

​Elaborating on the dismantling of the police department, Bender told CNN that the plans are to "shift police funding toward community-based strategies and that the city council would discuss how to replace the current police department".

American Civil Liberties Union of Minnesota, responding to the Council's decision, said in its Twitter account that it will hold the Council accountable for "creating a system that eliminates the racial disparities that have long defined our criminal-justice system".

We will hold you accountable for creating a system that eliminates the racial disparities that have long defined our criminal-justice system, and that ends brutality by law enforcement officers and whoever replaces them.

​Commenting on the Council's decision, the chair of the Public Safety Committee, councilwoman Alondra Cano, said that the pledge “signals a strong and clear direction about where this is going", cited by the New York Times.

At a rally this weekend, Minneapolis Mayor Jacob Frey said he does not support abolishing the police department, which resulted in immediate condemnation from the crowd, who shamed and booed him out of the rally. It is Frey that police answer to, although the City Council controls the budget. Frey can veto the Council's decision, but the members say they have enough votes to override his ban.

Minneapolis is the starting point for widespread anti-police-brutality protests that have rocked all 50 of the United States and most major urban areas, as well as spreading to other countries, after African-American George Floyd was killed in custody by white police officer Derek Chauvin and his three white counterparts. All four were fired and arrested.

000000
Popular comments
goldcamshaft, Unfortunately, this naive attempt at utopianism has failed time and time again. Failure to address the true origins of inequality will blow up in their faces. The problem in Minneapolis, Minnesota, USA are systemic, ie., they are the products of a system designed to maintain inequality in all respects; individual, social and economic. Changing out the hood ornament on a car will not affect the performance of the vehicle's engine, it is purely cosmetic. Number 1. Will the National Security state allow this experiment to succeed? No. 2. Will the economic elites allow this experiment to succeed? No. 3. Will the political right allow this experiment to succeed? On all three counts, my gut tells me, "no." Something very similar happened in Germany in 1919 and after an extremely bloody class war the Right wing Industrialists and Junkers formed one of the most repugnant governments to exist in modern times. The problems facing Minneapolis are the same problems facing the entire USA and a better part of the world; it is systemic, it is economic inequity, it is Capitalism!