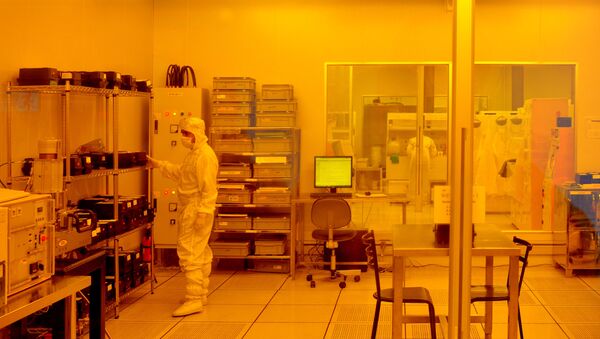 New Delhi (Sputnik): Earlier this month, Indian Prime Minister Narendra Modi urged the public to “go vocal for local” in light of the economic and trade barriers that have interrupted smooth business between countries. In a bid to tempt tech and electronics players to India, the country has revealed some new guidelines.

As smartphone sales are projected to decline by 13-15 percent in India, the country's Union Information and Technology (IT) Minister Ravi Shankar Prasad on Tuesday introduced three new schemes for local as well as global manufacturing companies, aiming to consolidate tech production from India itself.

The three new schemes – which are projected to create between 500,000 to 1.5 million direct and indirect job opportunities for Indians – are named the Scheme for Promotion of Manufacturing of Electronic Components and Semiconductors (SPECS), Production-Linked Incentive (PLI), and Modified Electronics Manufacturing Clusters (EMC 2.0).

Under SPECS, the Indian government will assist the companies with 25 percent incentives on company expenditures for manufacturing products, including components, semiconductors, and displays, among others.

While under the PLI scheme, the Indian government will provide incentives of between four to six percent on India-manufactured products, depending on the incremental sales of the goods, for five years; the EMC 2.0 scheme ensures the provision of best-of-the-class infrastructure, with facilities like Ready Built Factory Sheds (RBF), and more.

​The schemes are expected to further escalate mobile phone production and churn out approximately $133 billion by 2025.

Amid the ongoing chaos over the pandemic and US blacklisting of several Chinese companies over alleged national security reasons, a number of international companies that have depended on China for their product manufacturing in the past have shifted their focus to India.

In 2019, tech majors from both countries, like Apple, Xiaomi, OPPO, and others, took the subject of manufacturing products in India pretty seriously.

From hefty investments to manufacturing hubs, India has been attracting tech players seeking a potential alternative to expand their market and manufacturing hubs in, without facing the brunt of the intensifying US-China trade war.

In September 2019, California-based Apple announced hefty investments of $1 billion to facilitate iPhone production from its Chennai facility in India. In November 2019, India-produced iPhones hit the shelves in national as well as global markets. Later, companies like Amazon, Microsoft, and Google also invested heavily in India.

Even amid the lockdown and global economy struggling with the ongoing COVID-19 crisis, Indian telecom company Reliance Jio – which is headed by Asia’s richest man, Mukesh Ambanim – roped in billions of dollars' worth of investment from the social networking giant Facebook and other America-based private equity firms.