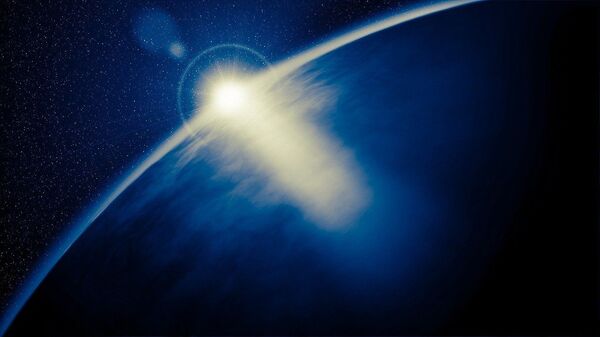 Saturday’s launch became the first manned space mission from the United States in nine years as NASA previously relied on Russian spacecraft after its fleet retired in 2011. The launch also marked the first time that a private aerospace company has sent people to space.

While millions of people across the world watched the live broadcast of SpaceX’s historic launch to the International Space Station, one woman spotted a mysterious object that she said looked like a UFO. The bizarre object, which travelled at a high speed, appeared below the Falcon 9 rocket as it was entering low Earth orbit. The woman then posted the footage on her Twitter account.

Did y’all see the #ufo on camera today..... watch this!!! We just saw this!! This is us recording from our tv! #SpaceLaunchLIVE #SpaceX pic.twitter.com/Wg2PE055Hu

​Netizens were divided over the issue. Some users supported the idea that the fast-flying object was of alien origin.

Others contended that it was nothing more than a satellite or space debris.

Yas!
I saw one live that was different than this one, both my husband and i lo I ked at each other... is no one going to mention the ufo!?

Wow. Nice catch. They are hidden from us by the Deep State

Others claimed that they saw more than one UFO during the launch.

That was a satellite. There’s thousand of them in orbit above earth.

​Some users lamented that there was no comment from NASA or SpaceX about the mysterious object.

Why wouldn’t @NASA say anything about this?

​Still others joked that some cheeky aliens were practicing photobombing and even tried to kidnap SpaceX founder Elon Musk.

Blummin photo bombers. There should be a law for ET to stop upstaging human events. Where is Will Smith when you need him?

​On Sunday, the Crew Dragon capsule with two NASA astronauts successfully docked at the International Space Station. The launch became the first crewed mission launched from US soil in nine years. After NASA stopped using its shuttles in 2011, it resorted to using Russia’s Soyuz rockets to launch astronauts to the ISS.