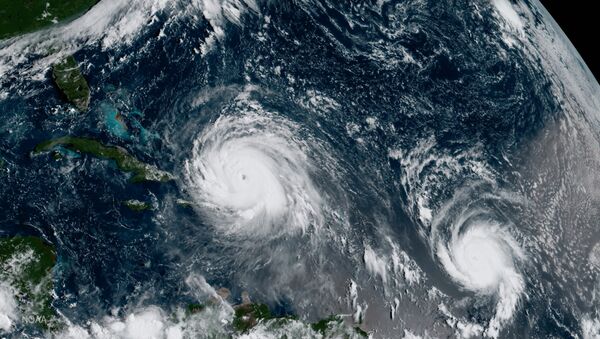 The Atlantic Ocean hurricane season typically starts at the beginning of June and runs through the end of November. In an average season, six major hurricanes occur and the peak time usually occurs in August and September.

The National Oceanic and Atmospheric Administration (NOAA) has predicted a busy hurricane season ahead in the Atlantic Ocean basin, with six to ten major hurricanes projected.

The government forecasters said there is a 60 percent chance of an above-normal hurricane season, due to begin 1 June.

NOAA said they are expecting 13 to 19 named storms to develop during the season. These tropical storms have wind speeds of 39 mph and higher. Storms become hurricanes when winds reach 74 mph.

The Climate Prediction Centre has also predicted six to ten hurricanes this season, including three to six possibly becoming major hurricanes, with wind speeds of 111 mph and above.

“This is higher than the average season which usually produces 12 named storms of which six become hurricanes, including three major hurricanes,” NOAA explained.

​This announcement comes amidst the coronavirus global health pandemic, which at the time of publication the US has recorded 93,863 deaths, the world’s largest toll, according to the John Hopkins Coronavirus Resource Centre.

“As Americans focus their attention on a safe and healthy reopening of our country, it remains critically important that we also remember to make the necessary preparations for the upcoming hurricane season,” said Secretary of Commerce Wilbur Ross. “Just as in years past, NOAA experts will stay ahead of developing hurricanes and tropical storms and provide the forecasts and warnings we depend on to stay safe.”

NOAA explained that the predicted above-normal activity in the Atlantic Ocean this year is due to a combination of several climate factors.

According to the NOAA, conditions such as the “El Nino Southern Oscillation are also expected to either remain neutral or to trend toward La Nina, meaning there will not be an El Nino present to suppress hurricane activity.”

Similar conditions have been producing more active seasons since the current high-activity era began in 1995.

Experts have said that social distancing may impact the usual preparations being put in place for natural disasters.

“With tornado season at its peak, hurricane season around the corner, and flooding, earthquakes and wildfires a risk year-round, it is time to revise and adjust your emergency plan now,” said Carlos Castillo, acting deputy administrator for resilience at the Federal Emergency Management Agency (FEMA). “Natural disasters won’t wait, so I encourage you to keep COVID-19 in mind when revising or making your plan for you and your loved ones, and don’t forget your pets.”

Already earlier this week, the hurricane season kicked off early, with Tropical Storm Arthur affecting North Carolina. The next named storms to follow will be Bertha, Cristobel, Dolly and Edouard.

Did yours make the list? Here are the storm names for the 2020 Atlantic #HurricaneSeason according to the @WMO: