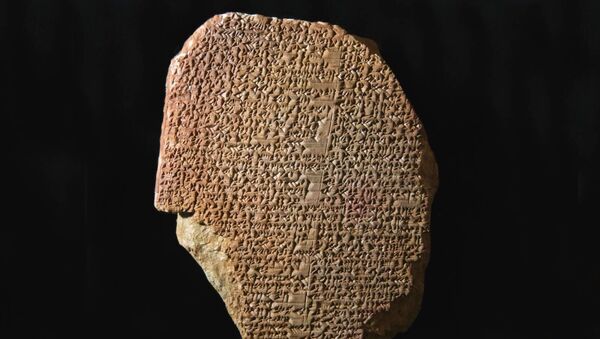 Federal prosecutors in Brooklyn, New York, have filed a civil complaint, calling for the pillaged “Gilgamesh Dream Tablet” to be returned to Iraq after it was sold by an international auction house to Oklahoma-based arts-and-crafts retailer Hobby Lobby Stores Inc.

A Monday release from the US Attorney’s Office of the Eastern District of New York revealed that a rare cuneiform tablet containing a portion of the “Epic of Gilgamesh” poem had entered the US “contrary to federal law” and was later sold by an unnamed auction house.

The Gilgamesh tablet, dating back to 1600 BC and estimated to be worth around $1,674,000, according to the New York Post, was later sold to Hobby Lobby for display at the Museum of the Bible.

Citing experts in cuneiform, the release noted that the tablet includes the portion of the Gilgamesh epic in which the Sumerian hero is detailing his dreams to his mother. The mother interprets the dreams and contends that they foreshadow the arrival of a new friend.

“You will see him, and your heart will laugh,” she tells her son.

However, federal agents weren’t laughing when they seized the tablet from the Museum of the Bible in September 2019.

“Whenever looted cultural property is found in this country, the United States government will do all it can to preserve heritage by returning such artifacts where they belong,” said Richard P. Donoghue, US attorney for the Eastern District of New York, in the May 18 release.

“In this case, a major auction house failed to meet its obligations by minimizing its concerns that the provenance of an important Iraqi artifact was fabricated, and withheld from the buyer information that undermined the provenance’s reliability.”

According to the investigation carried out by federal authorities, the tablet made its way to the US after an American antiquities dealer purchased the artifact in 2003 from a Middle Eastern dealer based in London, England. It was then sold off by the antiquities dealer and accompanied with a “false provenance letter that stated the tablet had been inside a box of miscellaneous bronze fragments purchased in a 1981 auction.”

The Museum of the Bible ultimately cooperated with federal authorities’ investigation.

Homeland Security Investigations Special Agent-in-Charge Peter C. Fitzhugh noted that his team will be working with prosecutors as the case progresses to “ensure those who would attempt to profit from this crime are held accountable.”