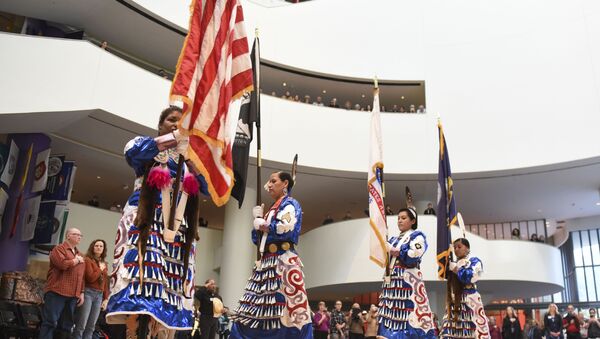 Ekaterina Blinova
All materialsWrite to the author
Native American communities have turned out to be the most vulnerable US ethnic minorities amid the COVID-19 pandemic. As some states are rushing to lift restrictions to give a boost to the economy, indigenous tribes' pleas not to expose them to further contagion remain unheard, observes retired UN expert Alfred-Maurice de Zayas.

Indigenous tribes in Alaska will be put at a grave risk of COVID-19 infection unless Governor Mike Dunleavy (R) closes this year's $300 million Bristol Bay commercial salmon fishery, which attracts thousands of non-resident seasonal workers, says a 13 May complaint submitted on behalf of the Bristol Bay Area Health Corporation and the 28 villages of the region to the Alaska State Commission for Human Rights. Tribal leaders warn that the Bristol Bay's sole hospital has only 12 beds suitable for COVID patients, while its two available ventilators are not equipped with viral filters.

Bristol Bay is home to the one of the largest wild sockeye salmon fisheries in the world, with its 2018 harvest being valued at more than $700 million, according to The Washington Post. As the 2020 fishing season nears, the governor has ruled out any closures.

Alaska Natives are not the only American indigenous community left out in the cold amid the COVID-19 outbreak, highlights retired UN Independent Expert on the Promotion of a Democratic and Equitable International Order Alfred-Maurice de Zayas.

Sputnik: Are the concerns voiced by the Alaskan indigenous tribes justified and why does the governor appear to turn a deaf ear to their pleas? Who is responsible for maintaining health infrastructure in the region?

Alfred de Zayas: As laid out in the complaint forwarded to the Alaska State Commission for Human Rights, the Alaskan indigenous tribes are especially at risk of contagion by the coronavirus and it is irresponsible for the authorities to want to go ahead with the “invasion” of fishing boats and thousands of fishermen and sailors into Bristol Bay.

Imagine your local Alaskan Native Village population swelling from 300 to over 12k in the summer months for the Commercial Fishing Season. Fisherman and plant workers from all over Asia, Africa, and the lower 48 working in a village with no road access. pic.twitter.com/Y7gThpGhQG

​That is why the Curyung Tribe and the City of Dillingham have asked the governor of Alaska, Mike Dunleavy, to protect the health and safety of residents: "There is no way to prevent a potential mass disease situation when a few hundred people are in close proximity with each other".

Thomas Tilden, chief of the Curyung Tribal Council, said that if the state allows the fishery to go forward, a comprehensive and effective plan must be in place, which is not the case. Therefore, Curyung declared a state of emergency and disaster for the tribal community, and the city council passed a resolution restricting travel into Dillingham. Responsible for maintaining health is Adam Crum, the Alaska Department of Health and Social Services commissioner.

The summer fishing season brings with it an influx of thousands of fishermen and processor workers into small communities around the region, communities that lack the medical infrastructures to handle any kind of a pandemic. As far as state investment in health and hospital facilities, the Alaska indigenous have been left behind. Although the indigenous tribes are clearly deserving of protection, the sockeye salmon fishery is the largest in the world, and there is much money involved.

Sputnik: Other Native American communities are reporting a sharp increase in coronavirus cases exacerbated by insufficient health care systems, large numbers of people with pre-existing conditions, and a collapse of tribal economies amid the outbreak – not to mention the lack of clean drinking water and elementary conveniences. What's behind this dire state of affairs? Are the Trump administration and local authorities doing enough to address the problem? Did the preceding administration handle the indigenous peoples' problems any better?

Alfred de Zayas: On 11 March, the Navajo Nation declared a public health state of emergency, two days before Trump announced a national state of emergency. The tribe is based in the southwest of the United States on a territory stretching across parts of Arizona, New Mexico and Utah. As of mid-April the death toll among the Navajos was higher than 13 different states combined, having the third-highest infection rate in the country after New York and New Jersey.

As coronavirus spreads across Navajo Nation, "one thing tribal members keep coming back to is their resiliency." @NPR reports on the latest numbers. https://t.co/3ueUsjpJah pic.twitter.com/tgxo4M1f8k

​Dean Seneca, a member of the Seneca Nation who has worked more than 18 years at the Centres for Disease Control and Prevention's (CDC) Centre for State, Tribal, Local and Territorial Support, stated that tribal epidemiology centres have not had the capacity to track the disease: “We don’t have links with our tribal health departments and/or state health departments in order to share data or real-time incidence, prevalence and any kind of mortality data or information related to this …Our systems are just not in place in order to do good active surveillance”.

​The Lummi Nation in the state of Washington reports that residents already suffer from high rates of diseases and that the Lummi Tribal Health Clinic will not be able to cope. Meanwhile, at the Cherokee Nation in Oklahoma, 74 persons were tested positive for the virus as of 14 May, while two had died by 17 April. Chief Chuck Hoskin Jr. said: “We’re preparing for the worst ... This is the worst public health crisis we’ve had in a generation”.

There are 574 federally recognised Native American tribes across the United States, many with limited access to basic resources. It has been estimated that Native Americans are 19 times more likely than white people to lack indoor plumbing.

In a larger historical context, we should remember that the indigenous communities of the United States and Alaska were nearly wiped out by the Anglo-American “pioneers” through massacres and disease in the 17th-20th centuries. Ten million indigenous peoples, sometimes called “first nations” – the Crees, Cherokees, Sioux, Dakotas, Squamish – lived in North America when the Spaniards came to Florida, the French to Louisiana, and the British to Massachusetts and Pennsylvania.

They were massacred, their crops were burned, their buffalo slaughtered, their natural resources looted, etc. in a concerted effort to exterminate them. By the end of the 19th century, there were less than a million indigenous people left, but over the course of the 20th century, their numbers have somewhat recovered. Surely the treatment of the North American indigenous can be considered “genocide” according to the 1948 Genocide Convention, but the indigenous of America are as poor as church mice and do not have enough money to hire a good lawyer to take their cases to international adjudication. 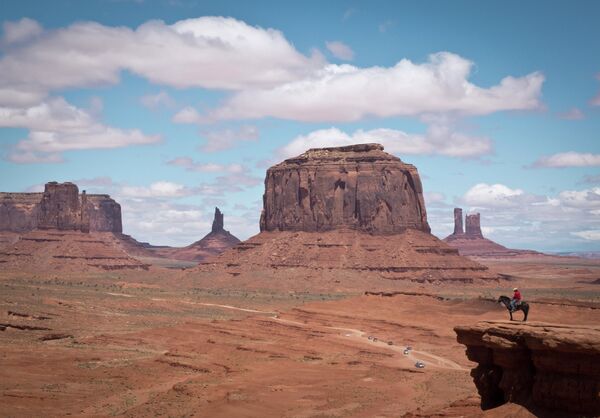 A Navajo man on a horse poses for tourists in front of the Merrick Butte in Monument Valley Navajo Tribal park, Utah, on May 12, 2014
© AFP 2022 / MLADEN ANTONOV

Sputnik: Why doesn't the US, the wealthiest country in the world, improve the living standards of its Native American population? What US and international institutions protect the rights of Native Americans? Have the UN and WHO addressed the tremendous challenge posed by COVID-19 to the US indigenous communities?

Alfred de Zayas: Everything in Washington, DC responds to lobbies and pressure groups. The indigenous are so poor that they cannot afford effective lobbyists. It is immoral that the Europeans came to the new world as “migrants” and then proceeded to steal the country from the rightful owners – the indigenous communities.

There is not a treaty with the indigenous that was not broken. Their land was confiscated and their natural resources looted. Their way of life was made impossible side by side with the “superior” European peoples who should inherit their “promised land” – at the expense of the natives. Native cultures were devastated and in the end they were resettled into “reservations”, frequently in desert areas, where they were thrown to “the gnashing of teeth” (Luke 13:28).

It is paradoxical that the European and American cultures that are so pathologically committed to the sacrosanct idea of private property that they would not hesitate to steal not only “some” private property from the indigenous – but actually to steal the entire continent and leave them destitute. It is instructive to hitch-hike through the United States as I did in 1970 – and discovered that there are literally tens of thousands of indigenous names of rivers, lakes, mountains, villages, cities: Alaska, Chicago, Connecticut, Delaware, Denali, Idaho, Illinois, Iowa, Manhattan, Mississippi, Missouri, Niagara, Ohio, Ottawa, Pontiac, Potomac, Seattle, Toronto, Yosemite, etc.

The World Health Organisation has been doing what it can for indigenous communities, but it is woefully underfunded. The WHO recognises that there are over 370 million indigenous peoples in the world, who represent a rich diversity of cultures, religions, traditions, languages and histories. Through a number of World Health Assembly resolutions, the WHO is mandated to devote special attention to the issue of indigenous peoples' health.

The United Nations is aware of the vulnerability of indigenous peoples to COVID-19, and not only in Alaska and North Dakota, but also in Central America, and the Amazon basin. The new special rapporteur on the rights of indigenous, Francisco Cali Tzay, himself an indigenous from Guatemala, is seized of the matter. Information and petitions can be addressed to him. A special taskforce should also be established. Non-governmental organisations like Amnesty International and Human Rights Watch also have a role in defending indigenous and their right to freedom of expression and freedom of peaceful assembly.