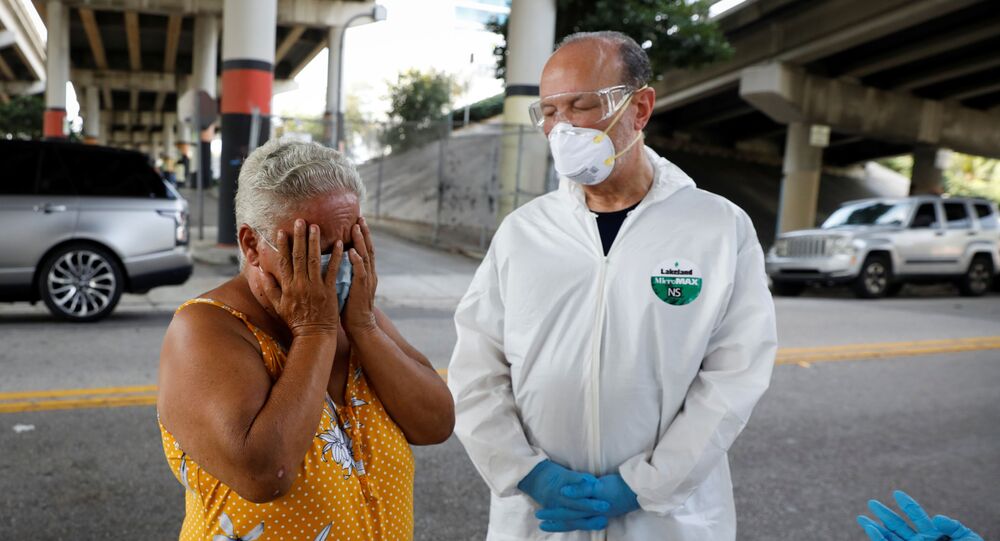 Experiment to Follow: Why Many American States Are Ditching Lockdown Restrictions?

Last week, several American states started easing restrictions imposed by the coronavirus lockdown, despite continuous warnings from epidemiologists that it was perhaps too early to come back to normal life. It will soon be clear whether this move should be an example for other states to follow or a mistake never to be repeated.

The governors of Georgia, South Carolina, Florida and some other southern states have announced that they will begin reopening some parts of their local economies in line with earlier White House recommendations and some broader powers they are now endowed with to decide on when and what appropriate steps should be taken to bring the US economy back to normal.

​In South Carolina, book stores, flower and clothing shops began reopening from 20 April onwards. On Monday, Tennesseans were able to come back and enjoy meals in their favourite restaurants, while in Georgia, citizens rushed to beauty parlours to finally get their hair and nails done. In the meantime, the governor of Florida Ron DeSantis openly defended the decision to re-open local beaches for visitors, despite a large number of nursing homes and old citizens in the area.

Many believe that these steps were too premature and will eventually result in a spike in COVID-19 cases across the state once non-essential businesses start operating while attracting hundreds of visitors and packed crowds.

“The sad thing is that the states that are opening up - Georgia, South Carolina, Florida, and Texas - are the least equipped to handle the results of what they will be unleashing”, says Peter Kuznick, a history professor at American University. “These states also have the worst health care and fewest hospitals with intensive care unit beds in the country and are therefore least-equipped to deal with the outbreaks that will inevitably result”.

According to Sean Adams, a professor of history at the University of Florida, this rebellious move and rush to open economies in southern states as soon as possible can be explained by a “standing tradition of resistance to unpopular federal initiatives” to which political leaders are ready to tap into when they have an opportunity to do so.

This position is echoed by David Goldfield, the Robert Lee Bailey professor of history at the UNC Charlotte, who argues that it is the historically different path and distinctive characteristics of these southern and predominantly Republican-governed states, that often make them view the federal government more “skeptically”, and this difference is “often reflected in contrariness”.

© REUTERS / Sam Thomas
People stand in line at a Duval County restaurant by the beach after it was opened amid coronavirus disease (COVID-19) restrictions in Jacksonville, Florida, U.S. April 19, 2020

Ross Baker, a political science professor at Rutgers University, also suggests that the reasons for such a rush are mainly political and demographic, as their Republican governors tend to follow the president’s call for an early opening.

States Where Demand Is Hit But Not Killed

Meanwhile, this historical and political proclivity does not exactly explain why some northern states, including Alaska, or Democrat-led central areas, such as Colorado, are also eager to ditch lockdown measures as soon as possible, suggesting that there are mainly economic reasons behind such moves.

According to Michael R. Englund, a principal director and chief economist for action economics, LLC, the COVID-19 outbreak has had a different impact on different parts of the US, as some early openers, including Alabama, South Carolina and Alaska, have not been that hard hit by the pandemic. He suggests that these relatively less populous and non-urban states have already been practicing a large amount of social distancing due to the suburban way of life. Englund that believes that “it’s reasonable that the citizens of those states perceive that they face a greater economic than health risk with the coronavirus”.

“Of course, there will be some consumers in all the states that will be unwilling to go to restaurants or use elevators, and that a “demand hit” will take place. But, in the states that are early to open, the percentage of cautious consumers will be small”, the economist assumes, arguing that the phenomenon of “pent-up demand” could soon be witnessed in these states following the end of restrictions.

© REUTERS / MARANIE STAAB
A view of an entrance of a hair salon, wich is one of the businesses that reopened after a shutdown to prevent the spread of the coronavirus disease (COVID-19) in Augusta, Georgia, U.S., April 26, 2020

Some analysts, including Ross Baker, a political science professor at Rutgers University, however suggest that reopening businesses in southern states will not help the American economy overall until conditions improve in states with the highest income – and those hit by the pandemic the most – such as New York, New Jersey, Connecticut and Illinois. This is explained by the fact that southerners are strongly dependent for their revenue on northern states, mainly deriving their income from such industries as tourism, like in Florida, or luxury car manufacturing like in South Carolina or Tennessee.

“So my personal view is that these states taking measured steps is a necessary first step in trying to find that critical balance”, Blatt notes. “It is an experiment that not everyone agrees with, but it is also a uniquely American experiment at the state level, to try to find a balance between living with some acceptable level of the virus (and sadly death) and trying to limit the economic damage caused by the stay at home lockdowns”.

He says that early opening states will have “no choice” but to reimpose the self-isolation measures and restrictions again if the number of coronavirus infections rises as the result of their actions.

“However, if a reasonable balance is found between reopening business and an acceptable level of infection, other states will follow, tailoring their approach to their own specific situations - which vary greatly across the US”, Blatt believes.

© REUTERS / JEENAH MOON
US 'Heading' for Great Depression 2.0 Amid Coronavirus-Induced Economic and Job Collapse
This conclusion is echoed by Ross Marchand, Director of Policy for the Taxpayers Protection Alliance, who underlines the importance of this economic project as opposed to the status quo alternative.

“Soon, we’ll have some evidence as to whether these gradual re-opening plans are undermining public health. But one thing is for sure: opting for one extreme of total, unrestricted re-opening or the other extreme of continued isolation is a recipe for disaster”, Marchand concludes.