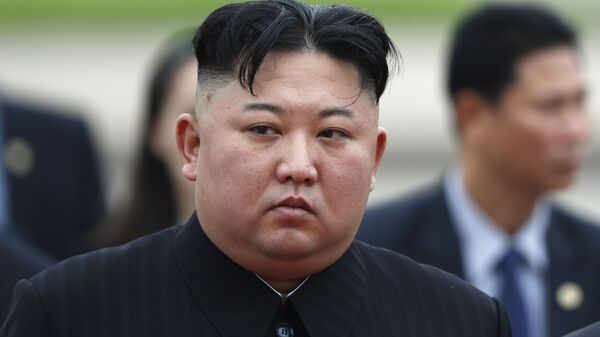 North Korea's leader Kim Jong-un returned to public view last week looking alive and well following weeks of speculation about his health after he skipped an important national celebration in mid-April. But speculation about Kim's next move is continuing amid reports he may be set to take to the water.

An analysis of satellite imagery by the NK PRO monitoring website reveals that a 80-metre-long pool boat, allegedly belonging to North Korean leader Kim Jong-un, was moved from its usual spot at the central Wonsan docks to an inner area to undergo repairs, potentially hinting at a visit by Kim to the Wonsan area.

“It is possible that, given the pattern of usage over the last two years, it is undergoing work to prepare it for its next outing to the island, to Kim’s Wonsan villa, or perhaps a first-time voyage to his new secluded luxury villa up the coast”, the report suggested.

The giant vessel is believed to house an Olympic-sized swimming pool, two huge waterslides and a multi-storey lounge and has been described in some reports as “capable of hosting extravagant gatherings”.

Given the pattern of usage over the last two years, it's possible that Kim Jong Un's megaship is undergoing work to prepare for its next outing to the island, to his Wonsan villa, or perhaps a first-time voyage to his new secluded luxury villa nearby. https://t.co/sIjOZmYdmV

​According to satellite footage provided by Planet Labs and then analysed by NK PRO, which includes a team of researchers from the US, South Korea and the UK, the luxurious boat was moved from its usual location at the end of March, with the pool’s flooring then being removed and one of its structures demolished in mid-April. On one hand, this could mean that the boat has been taken out of service. However, this could also mean that the vessel could be about to be used by Kim Jong-un or his associates, the report claimed.

“If the waterslide boat is indeed now seeing upgrades, it would likely be in preparation for what appears to be annual outings for the ship around the same time in recent years that coincide with Kim’s visits to the area”, the analysts continued.

The report was published on 1 May, as speculation was continuing about Kim's state of health and possible demise due to his absence from public sight for 20 days. He also missed the Day of the Sun on 15 April, the major North Korean holiday celebrating the birth of his grandfather, North Korea founder Kim Il-sung, which is unprecedented.

However, on 2 May, North Korea's Korean Central News Agency released images of the North Korean leader attending the opening of a fertiliser plant in a region north of Pyongyang, seemingly looking healthy.

Defectors Who Claimed Kim Jong-un Was Gravely Ill or Dead Apologize for False Speculation
Earlier, satellite images analysed by US-based North Korea monitoring project 38 North, suggested that a train, allegedly belonging to Kim, was parked at a station reserved for his personal use at the same coastal resort of Wonsan, suggesting that the republic’s head could have been residing there during his absence from public view. This has been corroborated by a senior foreign policy advisor to President Moon Jae-in, Moon Chung-in, who told the US media on 27 April that the North Korean leader had been staying in Wonsan since 13 April.
Newsfeed
0
Access to the chat has been blocked for violating the rules . You will be able to participate again through:∞. If you do not agree with the blocking, please use the feedback form
The discussion is closed. You can participate in the discussion within 24 hours after the publication of the article.
To participate in the discussion
log in or register
loader
Chats
Заголовок открываемого материала