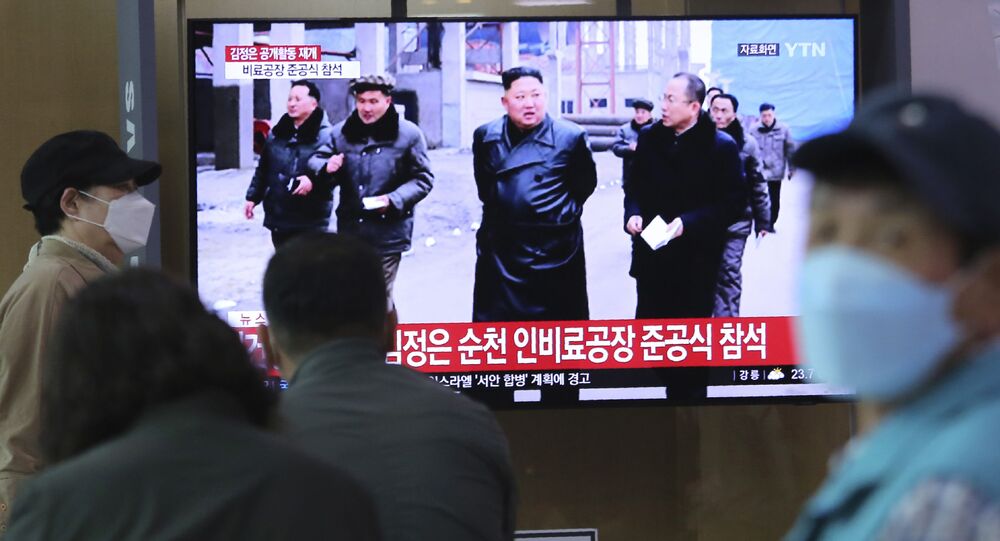 Dispelling rumors of his death or overthrow, North Korean leader Kim Jong Un has appeared in public for the first time in 20 days, according to Yonhap News Agency.

Kim Jong Un, the 36-year-old leader of the Democratic People's Republic of Korea (DPRK) dispelled weeks of Western rumors that he had died or been overthrown, appearing at a public ceremony on April 30 in the industrial city of Sunchon.

"The completion ceremony of the Sunchon Infertilizer Factory, which stands out as the main fertilizer production base, was held on May 1, which is the international holiday of workers around the world," CCB said, according to Yonhap.

"Our party, the Supreme Commander of the People's Republic of Korea, and comrade Kim Jong Un, the leading leader of the country's armed forces, attended the completion ceremony," the report continued.

JUST IN: Photos of Kim Jong Un opening a fertilizer factory in Sunchon on May 1, according to KCNA. pic.twitter.com/jaLjjFk55K

© AP Photo / Ahn Young-joon
People watch a TV showing a file image of North Korean leader Kim Jong Un during a news program at the Seoul Railway Station in Seoul, South Korea, Saturday, May 2, 2020. Kim made his first public appearance in several weeks as he celebrated the completion of a fertilizer factory near Pyongyang, state media said Saturday, ending an absence that had triggered global rumors that he was seriously ill. The sign reads: "Kim Jong Un attended a ceremony marking the completion of a fertilizer factory."

When reporters asked US President Donald Trump about Kim's surfacing, he reportedly said he didn't want to talk about it.

The socialist leader's re-emergence following death rumors makes him only the latest in a very long line of Korean figures rumored to have been killed in the DPRK, only to emerge later without any seeming ill effect.

Kim's absence from the public spotlight for several weeks helped fuel rumors he was either dead or badly ill. On April 21, an unidentified US official told CNN Kim was recovering from surgery and that his life was in "grave danger." While some observers had noted Kim's absence from public events, including commemoration of his grandfather Kim Il Sung's birthday, the report drove rumors in the West of Kim's demise.

However, South Korean officials, as well as US military staff, never officially worried about the socialist leader's wellness. In fact, a US bomber drill was staged off the coast of the North Korean city of Wonsan, where Kim was believed to be convalescing, earlier this week.

There were also no shortage of reports from DPRK media about Kim's activities, either, although no photographs emerged during that time, either.

However, it should be noted that Kim's appearance at this time does not dispel the possibility that he was, in fact, recovering from an illness or medical procedure.