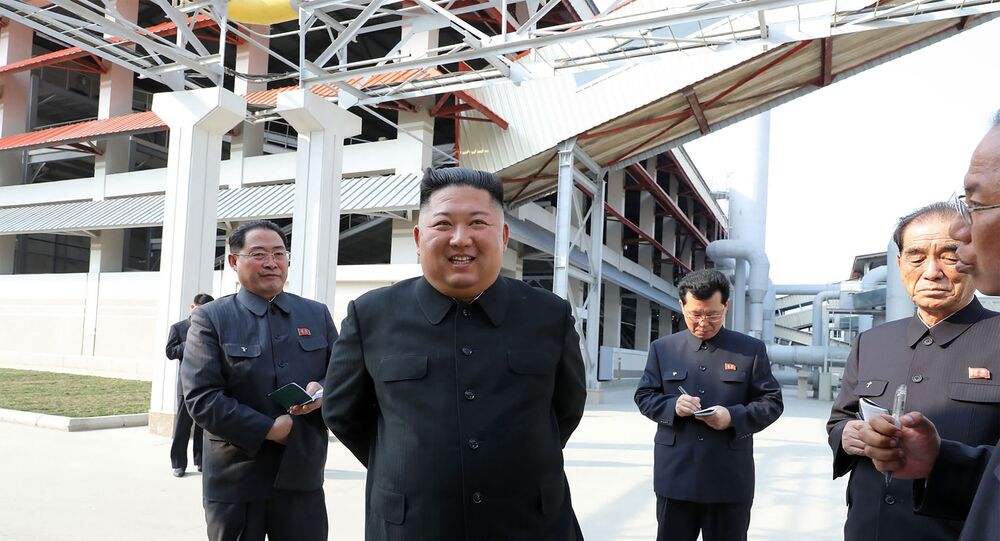 After weeks of speculation fueled by a lengthy absence, the North Korean leader suddenly reappeared in public on May 1 at the opening of a new fertilizer plant, dispelling rumours that he was dead or ‘gravely ill’.

Kim Jong-un’s surprise reemergence in public after weeks of speculation regarding his health raise a couple of important questions, specifically: how did the rumours get started, and who was behind them?

Queries regarding the North Korean leader’s whereabouts began swirling in mid-April, after he missed the public celebration of the Day of the Sun, the all-important April 15 anniversary of the birth of Kim Il-sung, founder of North Korea and Kim Jong-un’s grandfather. Before that, Kim also missed the session of the Supreme People’s Assembly, making his last public appearance on April 11 at a meeting of the ruling Workers’ Party of Korea politburo.

It was Daily NK, a South Korean-based online newspaper which receives grant funding from the National Endowment for Democracy, a US government-funded non-profit with the stated goal of ‘promoting democracy abroad’, which began the rumour that Kim had undergone a “cardiovascular surgical procedure.” What was the paper’s information based on? An unnamed source inside North Korea.

CNN took the rumour and ran with it, with a US official ‘with direct knowledge’ of the situation telling the network on April 21 that US intelligence was monitoring reports that Kim was “in grave danger” after undergoing surgery.

South Korean officials, meanwhile, maintained at the time that Seoul had “seen no unusual signs with regard to North Korean leader Kim Jong-un’s health.” Also telling was the fact that US President Donald Trump, who initially ‘wished Kim well’ after hearing the reports, quickly corrected himself, saying he thought CNN’s reporting was “incorrect” and based on “old documents.”

On April 26, a senior advisor to South Korean President Moon Jae-in spoke to CNN directly, once again dismissing rumours regarding Kim’s health, and reiterating that as far as Seoul was aware, he was doing just fine.

As for North Korean media, it issued a series of statements about Kim’s regular back-and-forth communications with officials, foreign leaders, and construction workers in Samjiyon, a model city in the country’s north.

Still, the lack of photos or videos meant that speculation would, with political talking heads mulling over Kim’s possible successor, possibly his sister Kim Yo-jong, while the Washington Post and the New York Times chalked out various apocalyptic scenarios, from panic buying in Pyongyang stores to fears of a cross-border refugee crisis and even a possible military incursion into North Korea leading to nuclear war.

© REUTERS / KCNA
North Korean leader Kim Jong Un attends the completion of a fertiliser plant, in a region north of the capital, Pyongyang, in this image released by North Korea's Korean Central News Agency (KCNA) on May 2, 2020.

Undeterred by the photo and video evidence challenging their claims, the rumour mill has continued to churn, with ‘health professionals’ telling NK News, a South-Korean-based online newspaper with alleged links to the CIA, that a mark on Kim’s arm seen in the footage actually “corroborates” earlier reports about his alleged heart surgery.

On Sunday, a senior official from the South Korean President’s office dismissed these claims, telling Yonhap that Seoul has “reasons to believe that there was no surgery, but cannot disclose such details.”

The swirling of rumours regarding Kim’s health led to an explosion of memes after his reemergence in public.

Are the “intelligence sources” who claimed Kim Jong Un was brain dead last week the same ones claiming this week that #COVID19 escaped from a Chinese lab? Asking for a friend.

Still, only a handful of observers have called out the mainstream media for this latest bout of “fake news,” with journalist and The Grayzone assistant editor Ben Norton calling it “example number 92,730,274 of how the Western corporate media is a totally useless propaganda machine that prints lie after lie in service of Western governments.”

After weeks of fake news claiming Kim Jong-un was dead, he is back

Example number 92,730,274 of how the Western corporate media is a totally useless propaganda machine that prints lie after lie in service of Western governments https://t.co/MWwAL7kU2n

Meanwhile, in South Korea, the country’s ruling Democratic Party reportedly demanded an apology from two defector parliamentarians on Sunday for their alleged role in circulating the fake news regarding Kim’s health. Before the release of fresh photos and video of Kim, high-profile defector and lawmaker Thae Yong-ho publicly said he was confident that the North Korean leader “cannot stand up by himself or walk properly,” while Ji Seong-ho, another opposition lawmaker, claimed he was “99 percent sure” Kim was dead. Jung Choun-sook, Democratic Party lawmaker and spokesperson, called on the pair of MPs to apologize over their now demonstrably "groundless remarks."