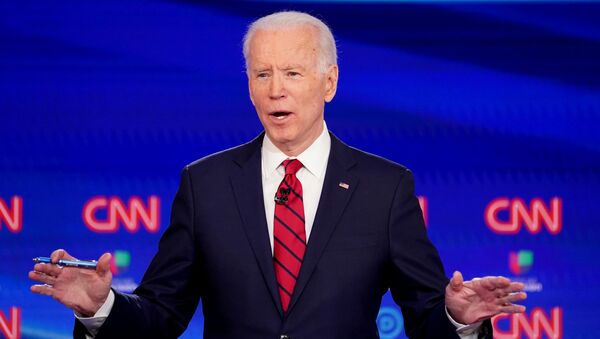 © REUTERS / Kevin Lamarque
Subscribe
On 1 May the presumptive Democratic nominee in the 2020 Presidential elections Joe Biden broke the silence about sexual assault accusations dating back to 1993 made against him by his former Senate staffer Tara Reade, saying he remembers no inappropriate encounter or complaint.

Former Senate staffer Tara Reade claims a barrage of online harassment has been targeting her over her sexual assault allegation against former US Vice President Joe Biden, reports Fox News.

"I find it astounding - the hypocrisy that Democrats are talking about women being able to tell their story safely… I'm a Democrat, a lifelong Democrat, but yet here I am trying to talk about my history with Joe Biden and I'm just the target of online harassment," Tara Reade was quoted as saying on Saturday.

Reade, who earlier in April formally filed a criminal complaint regarding the assault dating to 1993, when Biden represented the state of Delaware in the US Senate, claims a spate of fake social media accounts have been impersonating her.

In particular, claims the woman, one Facebook account under the handle "@TaraReada" that listed a fake website using the ex-staffer’s full name, had been uploading personal photos of her and her family.

A screenshot of one post was said to have been tweeted by someone under the name of Naomi Block, accusing Reade of "deliberately tossing [Christine Blasey Ford] under the dang bus," in a reference to a fake quote from the account.

After the home address of a member of her family was posted online, says Reade, that person received four anonymous "creepy" calls on Friday night.

There has not been an official response from Facebook.

In two voice messages, reports Fox News, someone believed to be posing as a journalist requested an opportunity to interview Tara Reade.

In the first, the message allegedly said: "Hi Ms. Reade, this is Dave Johnson from the Observer, a small New York newspaper," with the caller later adding "Jeffrey Epstein didn't kill himself" and "Trump 2020."

In another voice message to the family member, the caller is cited by the outlet as saying:

"Hey Tara, this is Dave Johnson with the Observer and I would really love, I'd really appreciate a call back so we can discuss your new powerful allegation against Vice President Biden. I think you're setting a tone and underscoring a double standard put forth by the Me Too movement, so I'd really appreciate it if you could just call me back, give me a couple of quick questions."

Threatening messages have also been targeting her, says Reade.

In one email cited by Fox News someone by the name of “Linda Dubois" verbally attacks Reade over her allegations against Biden, calling her a "f---ing whore" and a "disgrace to womanhood".

Another person is said to have written:

"You are a rip-roaring b---h and the great majority of Americans don’t believe you anyhow... I hope you drop dead."

Moreover, a tweet by a Biden ally was also believed to be targeting Reade, writes the outlet, as Jon Cooper, ex-chair of the Democratic Coalition, seemed to ponder online whether the woman "was driven by malicious motives."

In response to Cooper’s tweet, Tara Reade tweeted that she was forced to deal with such threats and harassment online for speaking up about the troubling incident from her past.

This is an example if what I am dealing with in addition to the threats and harrassment online.
I am not " unbalanced" and I do not have " malicious" motives.
I was sexually harassed and assaulted by my former boss Joe Biden in 1993. https://t.co/0DrwKCxsoi

"This is something that really has to stop and I'm just wondering where this is coming from… Are these just fanatic supporters? And if so, what does that say about our Democratic voters? Why are they targeting me when the party line is supposed to be allowing people to be safe? Why are they targeting my family and myself and making my family frightened?" Fox News quotes Reade as saying.

Earlier, on Friday, Joe Biden finally broke his silence about the 1993 allegations made by Reade.
Biden vehemently denied all allegations of sexual misconduct on his part, saying it "never happened".

"I want to address allegations by a former staffer that I engaged in misconduct 27 years ago. They aren't true. This never happened," Biden said in an MSNBC interview.

The presumptive Democratic nominee in the 2020 Presidential election further requested the Secretary of the Senate to comb the National Archives in the search for any complaints against him that his accuser, Tara Reade, claims to have filed back in 1993.

Tara Reade filed a criminal complaint against Joe Biden with police in Washington, D.C. in April, accusing former US Vice President Joe Biden of a sexual assault, and on 25 March spoke with progressive podcast host Katie Halper about the incident. 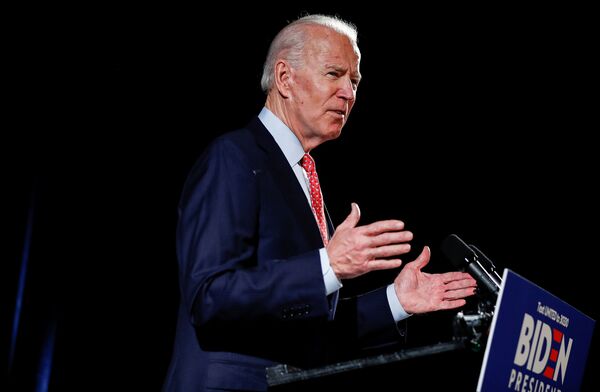 Reade, who was a staffer in Biden’s Senate office at the time, claimed the ex-Vice President assaulted her in a Senate corridor, slipping his hand under her skirt and penetrating her with his fingers. The woman also claims that Biden forced her out after she tried to speak about his behavior to her superiors in his office.

Several of Tara Reade's acquaintances claim she spoke about an assault at the time it allegedly occurred.

000000
Popular comments
Reade's allegations have a high probability of truth to them. No woman would admit to such an event in public fora. We know from other actual evidence that Biden is a sexual predator. There should be a formal trial, not in the court of public opinion only.
coronahoax
3 May 2020, 10:26 GMT1
000000
Americans can only chose their next Leader from a bowl of rotten eggs - Time has come for the AMERICAN PEOPLE to stand-up & find fresh eggs or face a bleak future
KingPuts!
3 May 2020, 13:03 GMT1
000000
Newsfeed
0
New firstOld first
loader
LIVE
Заголовок открываемого материала
Access to the chat has been blocked for violating the rules . You will be able to participate again through:∞. If you do not agree with the blocking, please use the feedback form
The discussion is closed. You can participate in the discussion within 24 hours after the publication of the article.
To participate in the discussion
log in or register
loader
Chats
Заголовок открываемого материала
Worldwide
InternationalEnglishEnglishMundoEspañolSpanish
Europe
DeutschlandDeutschGermanFranceFrançaisFrenchΕλλάδαΕλληνικάGreekItaliaItalianoItalianČeská republikaČeštinaCzechPolskaPolskiPolishСрбиjаСрпскиSerbianLatvijaLatviešuLatvianLietuvaLietuviųLithuanianMoldovaMoldoveneascăMoldavianБеларусьБеларускiBelarusian
Transcaucasia
ԱրմենիաՀայերենArmenianАҧсныАҧсышәалаAbkhazХуссар ИрыстонИронауОssetianსაქართველოქართულიGeorgianAzərbaycanАzərbaycancaAzerbaijani
Middle East
Sputnik عربيArabicArabicTürkiyeTürkçeTurkishSputnik ایرانPersianPersianSputnik افغانستانDariDari
Central Asia
ҚазақстанҚазақ тіліKazakhКыргызстанКыргызчаKyrgyzOʻzbekistonЎзбекчаUzbekТоҷикистонТоҷикӣTajik
East & Southeast Asia
Việt NamTiếng ViệtVietnamese日本日本語Japanese中国中文Chinese
South America
BrasilPortuguêsPortuguese
NewsfeedBreaking
15:42 GMTDrug Sniffer Dog Van Spotted Outside Parliament After Cocaine Use Reported to Cops
15:31 GMTCalifornia Port Congestion Slowly Shrinking, But Still Risks Christmas Goods Delays
15:28 GMTRose McGowan’s Lawsuit Against Weinstein Dismissed After She Fails to File Paperwork by Deadline
15:27 GMTRussian President Putin and His US Counterpart Biden Hold Virtual Meeting
15:19 GMTUS Leaders Speak With Forked Tongue
15:18 GMTPence's Former Chief of Staff Reportedly Agrees to Cooperate With 6 January Committee
15:13 GMTFrench Police Arrest Suspect in Connection With Journalist Jamal Khashoggi's Murder, Media Claims
15:07 GMTIndian Government Denies Reports From China of Infiltration Attempts
15:06 GMTSchool Principal in India's Uttar Pradesh Accused of Molesting 17 Girls
15:01 GMTFrench Presidential Candidate Zemmour's Party Now Counts 20,000 Members, Report Says
14:49 GMTBiden Visits WWII Memorial to Honour Pearl Harbor Tragedy - Photo, Video
14:49 GMTLegal Expert: BoJo's Judicial Review Reform Boosts Arbitrary Concentration of Power in No 10's Hands
14:36 GMTUK's Johnson Dismisses as 'Nonsense' Claims He Prioritised Animals in Kabul Evacuation
14:32 GMTAttack on US Military Convoy in Syria Causes ‘Huge Damage’ to Equipment, Report Says
13:56 GMTUK Deputy PM Says COVID ‘Plan B’ is ‘Not Required’ in Face of Omicron Variant
13:48 GMTIndian Teenager Arrested After 'Decapitating Pregnant Sister, Taking Selfie With Her Severed Head'
13:39 GMTGOP Representative Nunes Resigns Congress to Head Trump Media Firm
13:31 GMTFrench Presidential Hopeful Zemmour Explains Why Russia's NATO Expansion Concerns Are 'Legitimate'
13:13 GMTUS Allegedly Mulls Limiting Russia's Ability to Convert Currency to Deter It From 'Invading' Ukraine
13:12 GMTFire in Burundi Prison Reportedly Kills 38 People, Injures 69 Others - Photo, Video