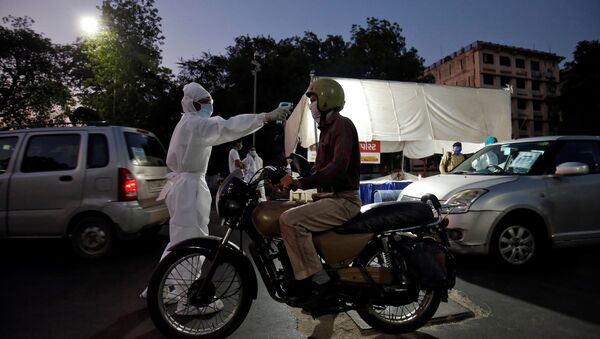 New Delhi (Sputnik): India is currently under its second phase of lockdown imposed by Indian Prime Minister Narendra Modi to curb the spread of the COVID-19 pandemic in the country. Recently, India's apex biomedical research body revealed in a study that 80 percent of the country's COVID-19 patients have been asymptomatic.

Indian medical experts have cited the country’s age structure and appropriate lockdown level as the reasons for the low mortality rate (3.1%) in comparison to western countries.

“Mortality rate is different everywhere. In India, it is low due to various factors like age structure - our population is comprised of more young people as compared to other countries. Children below 15 years form around 30 to 35 percent of our population and children don't get infected by this virus as fast as the elder ones,” said Dr Vikrant Shah, intensivist and infectious disease specialist.

He further explained that the mortality rate of this virus increases when the infected person is also having problems such as hypertension and diabetes, which is more common in elderly people.

“This is called Covid Distant Morbidity, in which chances of death increases as the infected person is struggling with other diseases as well, like cardiovascular, hypertension, diabetes, etc.,” Dr Shah added.

Currently, Belgium has the highest (57 per 100000) per-capita death rate in the world, out of which around 95 percent of COVID-19 deaths are reported to have been in elderly care. According to data from John Hopkins University, the US had a 5.7 percent mortality rate based on a percentage of overall cases last week. Data has revealed that the worst situations are in countries such as Belgium (15.3%), France (14%), UK (13.6), Italy (13.5%), and Spain (10.2%).

Over 20 percent of the total population in the UK is aged over 65 years, while in the US it is 17 and in India, it is a mere 6 percent. Agewise analysis suggests that 80 percent of total COVID-19 deaths in the US have been among those 65 and older.

Another doctor, Vivek Jain, a lecturer of preventive and social medicine, believes that the lockdown has played a vital role in combating the virus and should be extended after 3 May. “If the lockdown persists, then the country will have a better picture in terms of mortality,” Jain emphasised.

Talking about the increasing number of asymptomatic cases of COVID-19 coming into the picture, Jain said that people will not know that they are infected due to their lack of symptoms and can then become a potential source of transmission.

“If the patients do not show any symptom of the virus then they would not go for testing as well. Meanwhile, they can spread the infection to their family members and others who come in their contact. We can't even isolate such people, as we are completely unaware about the signs of the infectious virus,” Dr Jain said.

The Indian Council of Medical Research—the country’s apex medical research lab— is currently testing the asymptomatic direct and high-risk contacts of a confirmed case. Experts believe that identifying asymptomatic patients would be difficult without a change in the testing strategy.

Explaining what would be required in order to contain the spread or determine the presence of the virus in asymptomatic patients, Dr Jain said, “Even if there is a little doubt regarding any person being infected (though not showing the particular symptom), then he shall be tested.”

Intensivist and infectious disease specialist Dr Shah said that several state governments have announced that they are now testing people randomly for COVID-19 so that asymptomatic patients do not cause the disease to spread.

Indian Prime Minister Narendra Modi, while interacting with state chiefs on Monday, forewarned that the danger of the virus is far from over and constant vigilance is of paramount importance.

According to the Indian health ministry, India has confirmed as many as 27,892 positive cases of COVID-19 and 872 people have died due to the virus so far. While globally there have been over 2.9 million COVID-19 cases resulting in more than 200,000 deaths.