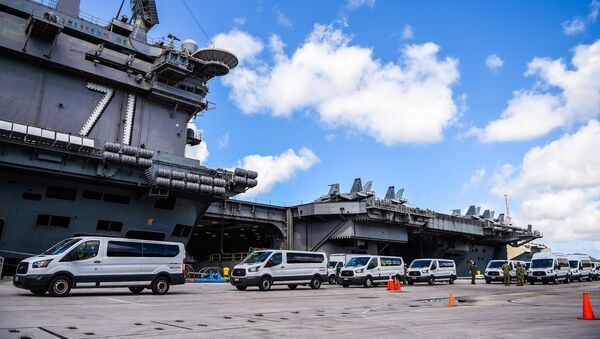 The aircraft carrier USS Theodore Roosevelt, which experienced a COVID-19 outbreak while at sea, is more than 80% clean, the Navy announced Wednesday. Meanwhile, a popular campaign is pushing for the ship’s former captain, who was fired after raising alarm about the outbreak, to be reinstated, and the Navy says it’s still weighing the idea.

"We have cleaned over 2,000 spaces so far and have cleaned over 80 percent of the ship," Cmdr. Chad Hollinger, the Roosevelt's weapon's officer, said in a Wednesday news release by the Navy. "I couldn't be more proud to take on the task of leading this team and I couldn't have asked for a better team to get this done. It hasn't been easy; it's hard work, but we are fighting through it. There is a light at the end of the tunnel, and we are going to get there."

As the cleaning crews move through the 1,092-foot-long warship, they seal off each section, explained Hollinger, whom the crew has taken to calling “Mr. Clean.” 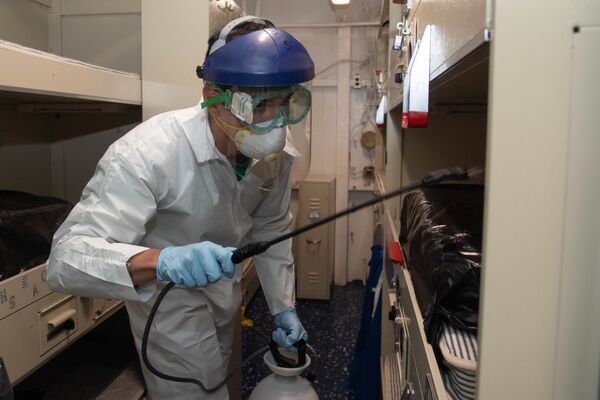 "I have been here since day one of bleach-a-palooza," said one sailor tasked with creating and dispersing cleaning solution to the scrubbing crews. "It's an all hands effort, and everyone is trying their best. Supply and medical work hand-in-hand to monitor every department on the ship to make sure they're cleaning twice a day. If they want to clean after hours, we support that as well."

"We supply gloves, rags, bleach, buckets and any other items needed to support the mission," the sailor said. "It's important to make sure every department gets what they need while also supporting the cleaning task force who clean all day." 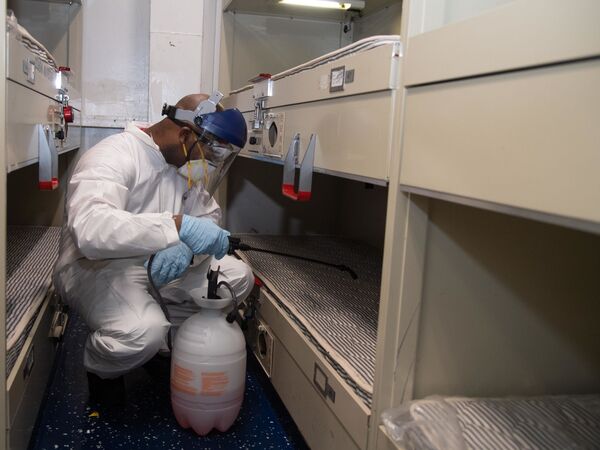 Aviation Ordnanceman Airman Brian Miller, from Mineral Wells, Texas, assigned to the Black Knights of Strike Fighter Squadron (VFA) 154, disinfects a berthing space aboard the aircraft carrier USS Theodore Roosevelt (CVN 71) with a multi-surface sanitizer, April 12, 2020. Upon arriving in Guam March 27, Theodore Roosevelt established an Emergency Command Center, initiated a roving and deep cleaning team, and continually educated the crew on social distancing and proper protective procedures and behaviors, to assist the crew in mitigating and controlling the spread of COVID. Theodore Roosevelt is in Guam for a scheduled port visit for resupply and crew rest during their scheduled deployment to the Indo-Pacific.
© Seaman Apprentice Kaylianna Genier

However, the cleaning process has been fraught with problems as well, with the sailors exposed to toxic chemicals without proper protection.

On April 8, the San Francisco Chronicle exposed that Roosevelt crew members were scrubbing their ship wearing “minimal protective equipment,” with latex gloves being the only protection supplied to them, forcing them to fashion homemade masks out of t-shirts, relatives of the crew told the paper.

Rear Adm. John Menoni, the senior US military official on Guam, told the paper he had been “assured they have the supplies on the ship that they need to do that cleaning.”

However, masks for the nearly 5,000 crew members have come not from Navy quartermasters, but from a ragtag band of do-gooders in Southern California, where the Roosevelt is based. Veteran Navy Corpsman Robert Harmon told the Orange County Register earlier this week that he had coordinated a group of local sewers, fabric technicians and couriers to produce homemade masks for the sailors on board “The Big Stick,” as the Roosevelt is often called.

According to the Register, the mask-making network is now 500-strong and has donated more than 12,000 masks to the Navy.

The COVID-19 outbreak on the Roosevelt began in the Philippine Sea in mid-March, about two weeks after the ship left Da Nang, Vietnam. By the time the Roosevelt had pulled into Guam, several dozen cases had been detected, and the ship’s then-commander, Capt. Brett Crozier, penned a frantic letter to Navy leaders pleading for support in quarantining his thousands of crew members.

After that letter was leaked to the press, Crozier was fired, and soon afterward, then-acting Navy Secretary Thomas Modly quit amid a firestorm that followed his damning criticisms of Crozier and the Roosevelt’s crew.

The resulting controversy saw Roosevelt crew members roar in support of Crozier as he departed the ship, lawmakers demand an inquiry into his firing and a petition circulate demanding his reinstatement. 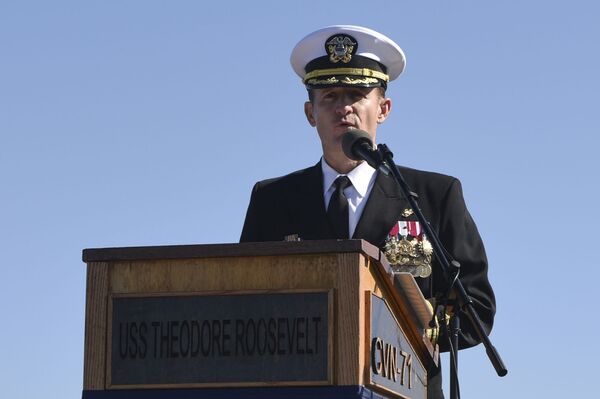 After Modly left, Defense Secretary Mark Esper, who had agreed with Crozier’s removal, told CBS there would be an investigation into all aspects of the episode, but that “no further action will be taken against Capt. Crozier until the investigation is completed.”

“Once that's completed, we'll see where that takes us," Esper said. "So we've taken nothing off the table.”

On Wednesday, Cmdr. Nate Christensen, a spokesperson for Chief of Naval Operations Adm. Michael M. Gilday, told the New York Times that “no final decisions have been made,” but noted that Gilday already had the probe’s preliminary results in hand.

“Captain Crozier was absolutely correct in what he did. He was putting his sailors first,” Rep. Jackie Speier (D-CA), who chairs the Military Personnel Subcommittee of the House Armed Services Committee, said, according to Nexstar Media Wire. “I think the morale on the ship is such that unless you were to reinstate him, you’d have to do some wholesale changes.”

So far, some 615 crewmembers on the Roosevelt have tested positive for COVID-19, including Crozier himself, and two sailors have died. Capt. Carlos Sardiello, the Roosevelt's new commanding officer, noted in Wednesday’s news release that the first crew members who became sick are completing their recoveries.