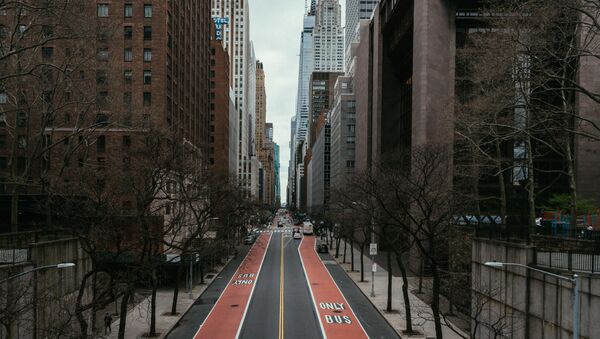 © Sputnik / Tatyana Stolyarova
/
Go to the photo bank
Subscribe
Ekaterina Blinova
All materialsWrite to the author
The coronavirus pandemic has turned the Big Apple into a ghost town. Observing desolate streets and boarded up stores urban dwellers have raised the question as to how New Yorkers will behave if they are pushed over the edge.

Leaden skies, empty streets, and rare pedestrians wearing face masks – this is how New York, the most densely populated city in the US, is shown by American investigative journalist Jason Goodman through the lens of his camera.

Together with Wall Street analyst Charles Ortel, Goodman re-explored the Big Apple amid the coronavirus outbreak live-streaming their walkabouts. The city has the largest number of confirmed COVID-19 cases and the highest mortality rates so far in the US. On 22 March, New York City went into lockdown requiring all non-essential businesses to remain closed and people to stay in their homes.

While most retail shops in Soho have closed their doors and taped a sign detailing their commitment to social distancing, the luxury stores — Louis Vuitton, Prada, even Coach — have boarded up their windows. Presumably to prevent any looting that might happen as this carries on pic.twitter.com/Kmjocw4Wjo

​SoHo, one of the city's famously fancy neighbourhoods, not only closed its designer stores and luxury boutiques but walled them off with plywood sheets "as if in anticipation of riots and civil disobedience", as Elizabeth Paton, a reporter for The New York Times Style section, noted in a 27 March op-ed.

​It's Not Criminals Who Pose the Greatest Threat

"Jason and I have been on two walkabouts so far", says Charles Ortel. "In parts of the city that are normally thronged such as Penn Station, we found many more homeless and drifter elements on 22 March 2020. It was actually scary. On 30 March, we found dangers lurking near homeless centres downtown in the Bowery".

Though most fancy stores have walled off their storefronts, Ortel notes that "so far, there have been only limited reports of looting though temptation is great and rising".

"Many urban centres, chiefly run by Democrats, are behaving inexplicably", he remarks. "Some are releasing prisoners who fear being infected by COVID-19 onto the streets".

However, it's not criminal elements who pose a real challenge to law and order, but potential provocateurs.

"Under these circumstances, a greater threat seems to be organised riots that might be incited by groups such as Antifa, inducing criminals to steal, loot, and destroy property in dramatic ways, so as to project a picture that capitalism itself has failed", he says. "I believe many in the mainstream media are hungry for images that will damage President Trump, particularly given Joe Biden's gaffe prone and hapless 'campaign'".

Citing his latest observations, the analyst says that the police are seemingly beefing up their presence in the streets of New York City to prevent hooliganism and disorderly behaviour.

​"Americans and front line first responders who are especially brave are hunkering down, and hoping for the best", he emphasises. "We have more than enough resources to bring hooligans to justice, even if they do manage to spark civil strife. I fully expect the Trump administration to react with appropriate, yet overwhelming force to any staged incidents. Should internal troubles come, they will likely start in gun-free zones, and sanctuary cities. But troublemakers will not prevail in the end". 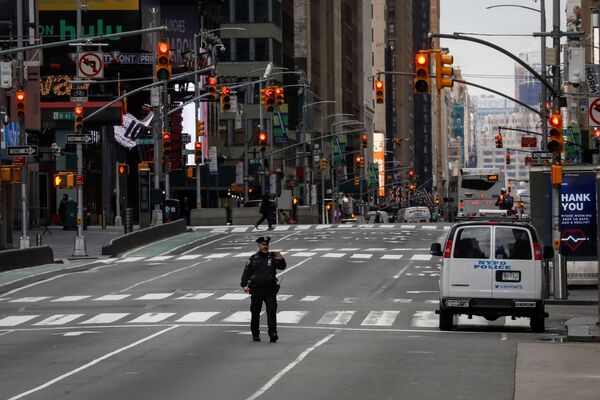 'COVID-19 is Going to Test US Urban Environment'

American peace activist Jan R. Weinberg observes that "a lot of fear is coming out of New York", which has become "the epicentre in the United States for the amount of people that have the coronavirus and the high amount of people that are dying daily". To add insult to injury, with big and small businesses disrupted amid the lockdown people are losing their sources of income.

"The ordinary people who did not plan ahead have no extra savings because they couldn't [allocate them] or spent too much of their money, they are not going to have the resources to make their ends meet", he says. "And this could trigger a domino effect, a cascade effect in a very negative way. I am very concerned about how people are going to behave".

A drone picture from today of the Holland Tunnel in New York City. This would’ve been rush hour. #COVID19 #StayAtHome #WednesdayThoughts pic.twitter.com/oEsc6agtwH

​Bemoaning the fact that the US government has failed to make contingency plans related to the epidemic, he opines that COVID-19 is now going to test American urban environments including that of New York City with its "high degree of poor people who are unable to pay the rent or pay for utilities or even unable to buy groceries".