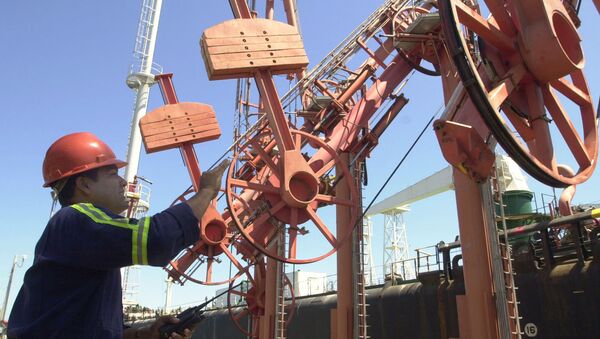 © AP Photo / Fernando Llano
Subscribe
Lilia Dergacheva
All materialsWrite to the author
According to lawyers cited by the company, the practice does not contradict “US primary sanctions jurisdiction” since the swap, which is in no way a “buy-sell contract", entails no cash transactions.

In a bid to safeguard imports amid stricter US sanctions, Venezuela has exchanged millions of barrels of crude for supplies of corn and water trucks under a joint deal with a Mexican firm, Reuters reported citing PDVSA export programmes.

The private Mexican firm Libre Abordo, which has hitherto had no expertise in the oil sector, has so far taken 6.2 million barrels of Venezuelan heavy crude to further resell it on international oil markets. It has two more oil and fuel cargoes due to be processed this month, the news agency specified. 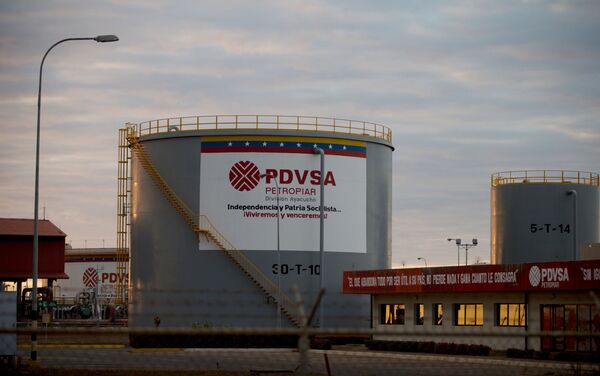 Meanwhile, Venezuelan state-owned oil company PDBSA has seen its international customer portfolio drastically shrink in the wake of US limitations slapped on Venezuela, its top officials, and state-run companies.

In a statement sent to Reuters, Libre Abordo said the contract to export Mexican corn and water to Venezuela in exchange for oil cargoes was inked last year and it still applies with no fixed deadline.

“These are not buy-sell contracts", the company said. “Libre Abordo has been very cautious. The contract is considered humanitarian aid".

Received oil cargoes, stipulated by the deal, are being resold quickly and the clients are taking possession of them at PDVSA’s ports with Libre Abordo unaware of the final destination or use, the company said.

According to the company, as was concluded from consultations with lawyers, the exchange is not in violation of the US sanctions since there are no cash payments involved in the deal: oil serves as a compensation for food aid.

“Based on the information we have received, it appears that Libre’s acquisition of title to PDVSA cargo in satisfaction of the pre-existing debt obligations occurred entirely outside of US primary sanctions jurisdiction", the lawyers, whose names and employer Libre Abordo declined to name, said in their review.

Governments around the world have called on Washington, an ardent critic of Venezuela’s President Nicolas Maduro, to ensure that sanctions do not cause the country to wind up in a real humanitarian crisis.

Political woes mounted in Venezuela in late January 2019 when Juan Guaido, the head of the opposition-controlled Congress, proclaimed himself interim president in a bid to oust re-elected Maduro from power.

Maduro has called Guaido a US puppet, conspiring with Washington to push through a coup in the country so that they can grit out control over Venezuela's natural resources.

The US government has introduced sanctions against Venezuela and its officials in recent years, as well as withdrawn its assets from oil firm PDVSA in a bid (failed for now) to force President Nicolas Maduro to resign.

It has brought about a severe economic crunch in the Latin American country, with the authorities struggling to overcome soaring inflation, as oil exports – key to the Venezuelan economy - have largely been paralysed.

000000
Popular comments
Tk, you mean it has no missiles to retaliate an attack.