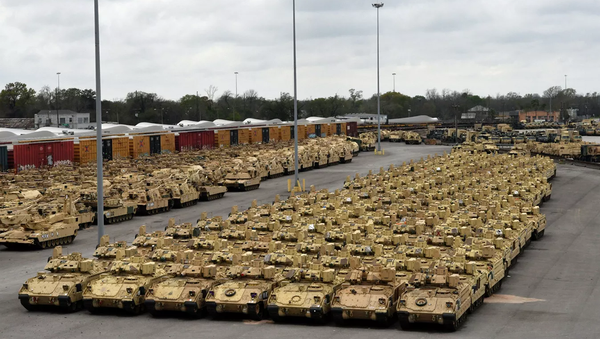 © Photo : US Army / Kimberly Spinner
Subscribe
Moscow has warned that it would “react” to the US-led exercises, known as ‘Defender Europe 2020’, although the response is expected to be limited to monitoring the provocative drills from within Russia’s own borders.

Polish Defence Minister Mariusz Blaszczak has announced the start of the Defender Europe 2020 drills in Poland, calling the exercises “the largest” of their kind in years, and confirming that echelons of US forces have begun making their way into Poland.

“About 37,000 troops will take part, including 20,000 from the USA. The first US Army troops have already crossed the Polish border,” Blaszczak wrote in a tweet, accompanying the text with photos showing US equipment moving into Poland under the cover of night.

The months-long Defender Europe 2020 drills, the largest deployment of US troops in Europe since the Cold War and one of the largest drills since the 80s, are reminiscent of the Cold War-era Exercise Reforger, which airlifted and sealifted tens of thousands of US troops to West Germany in response to a hypothetical Warsaw Pact invasion. Since then, the Warsaw Pact has long ceased to exist, as has the Soviet Union, but NATO has nevertheless continued its eastward expansion toward Russia’s borders.

The US-led drills, described by some European media as a ‘dress rehearsal’ for an invasion of Russia, include 20,000 pieces of US military equipment (7,000 of which has been brought across the Atlantic, and 13,000 pieces more taken from propositioned stocks). The US forces and equipment deploy in Europe through Belgium, the Netherlands and Germany, from where they move eastward through Germany into Poland and the Czech Republic, and then continue northeastwards into the Baltic states of Lithuania, Latvia and Estonia.

Over a dozen countries in addition to the US will take part in the drills, with the US alone including three armoured brigades, an artillery brigade, support units and Air Force and Marine Corps units.

The bulk of the drills’ active phase is expected to run from April until May, with the exercises designed to test Europe’s road and rail infrastructure, as well as any potential bureaucratic red tape. The Poland-based drills will include water crossings to simulate Eastern Europe’s river-rich environment.

NATO Supreme Allied Commander Gen. Tod Wolters told the Army Times this week that the alliance has “seen a fair amount of response from Russia,” without elaborating. “They’re not overly pleased with Defender Europe. We’re concerned mostly about the readiness of our forces and we’re doing all that in accordance with international law,” the commander said.

On Thursday, Russian Chief of General Staff Gen. Valery Gerasimov emphasized that Moscow had no illusions about the drills’ purpose or scope, and said that the buildup of NATO military activity on Russia’s borders was an issue of “serious concern.”

“The exercises planned for the near future are to be carried out on the basis of anti-Russian scenarios involving offensive operations,” Gerasimov said, added that the absence of military-to-military dialogue make the drills “provocative.”

Earlier, Russian Foreign Minister Sergei Lavrov said Russia would naturally “react” to massed NATO activities on its borders, but promised that the Russian response would “not create unnecessary risk.”

000000
Popular comments
Another dirty provocation of this military terrorist organization, NATO towards Russia. Lucian-Ion Cojocaru, Romanian independent journalist
LUCIAN-ION COJOCARU
29 February 2020, 19:32 GMT14
000000
Judging by the desert camouflage of the US military vehicles and American troops uniforms in the pictures under the tweets, Russians should not worry that Americans are planning a long stay in Poland or that they are up to a ‘serious business’. Of course, this is assuming that Americans know what they are doing.
el greko
29 February 2020, 19:54 GMT11
000000
Newsfeed
0
New firstOld first
loader
LIVE
Заголовок открываемого материала
Access to the chat has been blocked for violating the rules . You will be able to participate again through:∞. If you do not agree with the blocking, please use the feedback form
The discussion is closed. You can participate in the discussion within 24 hours after the publication of the article.
To participate in the discussion
log in or register
loader
Chats
Заголовок открываемого материала
Worldwide
InternationalEnglishEnglishMundoEspañolSpanish
Europe
DeutschlandDeutschGermanFranceFrançaisFrenchΕλλάδαΕλληνικάGreekItaliaItalianoItalianČeská republikaČeštinaCzechPolskaPolskiPolishСрбиjаСрпскиSerbianLatvijaLatviešuLatvianLietuvaLietuviųLithuanianMoldovaMoldoveneascăMoldavianБеларусьБеларускiBelarusian
Transcaucasia
ԱրմենիաՀայերենArmenianАҧсныАҧсышәалаAbkhazХуссар ИрыстонИронауОssetianსაქართველოქართულიGeorgianAzərbaycanАzərbaycancaAzerbaijani
Middle East
Sputnik عربيArabicArabicTürkiyeTürkçeTurkishSputnik ایرانPersianPersianSputnik افغانستانDariDari
Central Asia
ҚазақстанҚазақ тіліKazakhКыргызстанКыргызчаKyrgyzOʻzbekistonЎзбекчаUzbekТоҷикистонТоҷикӣTajik
East & Southeast Asia
Việt NamTiếng ViệtVietnamese日本日本語Japanese中国中文Chinese
South America
BrasilPortuguêsPortuguese
NewsfeedBreaking
11:14 GMTTrump's Oxygen Levels Fell 'Dangerously Low' During His Bout With COVID-19, Meadows Claims in Book
11:13 GMTChina’s Type 055 Destroyer Holds Anti-Submarine Drills Amid US Threats
11:09 GMTSouth Korea Backs Beijing Winter Olympic Games Despite US Boycott
11:04 GMTTrump Berates 'Corrupt News' Over Allegations He Was COVID-Positive Ahead of 2020 Debate With Biden
10:55 GMTLive Updates: Vladimir Putin and Joe Biden Hold Talks Amid Growing Tensions
10:52 GMTKremlin: US Decision on Beijing Olympics Can Hardly Be Called Boycott
10:45 GMTScientists Apply 'Immortality Mushroom' to Synthesise Nanogold
10:14 GMT'Blink Twice': Kamala Harris Aide 'Absolutely Loves' His Job, But Netizens Don't Buy It
10:09 GMTNovak Djokovic Signs Up for ATP Cup Amid Row Over Tennis Star's Vaccination Status
10:00 GMT'I Would Like Messi to Be Sincere': Robert Lewandowski Blasts PSG Star's Ballon d'Or Remarks
09:46 GMTPentagon Chief Concerned Over Americans' Declining Trust in US Military Under Biden
09:23 GMTCar Bomb Explosion in Southern Iraq Reportedly Kills 7 People - Video, Photo
09:14 GMTPalestinian Activist Adopts Recycling & Mass Education as PA Struggles to Cope With Piles of Waste
09:08 GMT'It's a Signal to Washington', Say Experts as India Expands Military Ties With Russia
08:58 GMTRussia Approves Flight of Two Japanese Tourists to ISS, Marking Return to Space Tourism
08:48 GMTAstroworld Tragedy: Travis Scott Asks Judge to Dismiss at Least One of 300 Lawsuits Against Him
08:42 GMTWhite House: Video Call With Putin Only Item on Biden's Timetable for Tuesday
08:36 GMTPutin, Biden Set to Hold 'Secure' Video Call Amid Ukraine Tensions
08:33 GMTLaser Communications Relay Demonstration Launched Into Space From Cape Canaveral in Florida
08:15 GMTEx-Madhya Pradesh State Chief Slams BJP After Hindu Activists Vandalise Catholic School in India