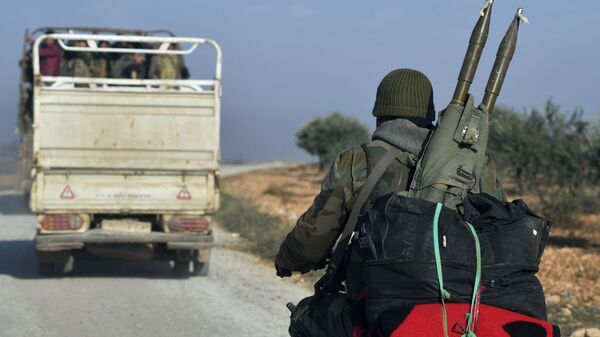 Subscribe
Tensions in northern Syria are escalating as Turkish and Syrian forces continue to clash in Idlib province – the last stronghold of jihadists in the war-torn country.

The Turkish Defence Ministry said on Tuesday that a Syrian Arab Army helicopter had been downed and that Syrian forces had to leave the village of al-Nayrab in Idlib province.

The Syrian Army later confirmed that it left the village for a short period of time due to the surprise attack; however, according to recent reports, government forces have recaptured al-Nayrab, pushing out rebels linked to the Jabhat al-Nusra* terrorist organisation. 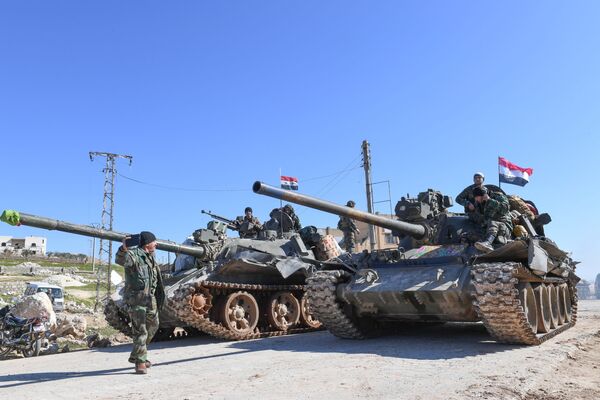 Syrian army units advance in the town of al-Eis in south Aleppo province on February 9, 2020, following battles with rebels and jihadists
© AFP 2021 / -

Tensions in northern Syria began to escalate earlier this month after eight Turkish nationals were killed in shelling conducted by Syrian forces on one of Turkey's observation posts in Idlib. Turkish troops responded with a strike and claimed that they eliminated 76 Syrian servicemen.

DADIKH (Sputnik) - Eyewitnesses observed a burning object falling over the village of Dadikh that is located not far from the town of Maarat al-Numan in Syria’s Idlib, where, Turkey says, a Syrian military helicopter was shot down earlier on Tuesday, a Sputnik correspondent reported from the scene.

According to the correspondent, black smoke was seen emanating from the falling object.

NATO Secretary-General Jens Stoltenberg said that Syria's armed forces, which are supported by Russia, must take steps to limit civilian causalities amid the recent escalation in Idlib.

"We call on Assad and Russia, because Russia provides support to the Assad regime, to stop these attacks, to respect international law and to fully support UN efforts to try to find a peaceful solution", Stoltenberg said.

He added that stopping violence was urgent, as hundreds of thousands of civilians have already been forced to flee the region.

Kremlin spokesman Dmitry Peskov confirmed that Putin will talk to his Turkish counterpart in light of the escalation of tensions in northwestern Syria.

Earlier in the day, Turkish Foreign Minister Mevlut Cavusoglu said that the presidents would discuss the situation in Syria's Idlib over the phone.