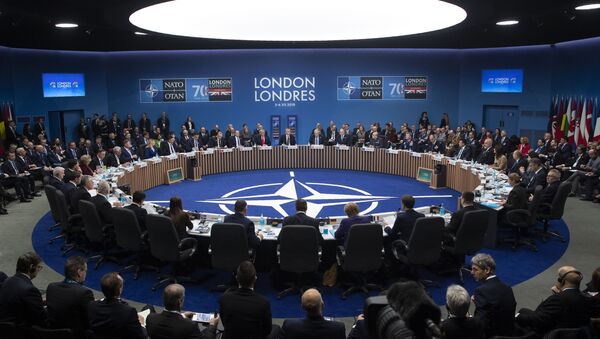 Lilia Dergacheva
All materialsWrite to the author
Long-term poll figures suggest that not only is public confidence in the 29-member alliance in decline, but individual countries’ preparedness to assist allies in the event of a military attack by a non-NATO country is too.

Public favourability towards NATO has fallen sharply in the US and major European countries since President Donald Trump moved into the White House, according to a new survey published by the Pew Research Centre.

In 2019, an average of 53 percent across 16 NATO countries surveyed had a favourable view of the alliance, while 27 percent had a negative sentiment, with Pew Research noting that the views have fluctuated since it first started polling about the military bloc in 2007. While some countries’ trust in NATO has increased, in Poland and Ukraine, for instance, many have soured on the North Atlantic Alliance since 2007.

In France, favourability towards NATO dipped from 71% in 2009 to 49% in 2019, whereas in Germany, positive views of the organisation went down by 16 percentage points.

Separately, the study emphasised the reluctance with which member states would react if their allies were attacked by some other state (the countries’ respective responsibility is outlined in Article 5 of the NATO Treaty).

For instance, when asked if their country should defend a fellow NATO ally against a hypothetical attack from Russia, an average of 50 percent across 16 NATO member states said it should not, while no more than 38 percent said it should.

The results of the poll were released ahead of the upcoming Munich Security Conference, an annual three-day gathering of world leaders, top diplomats, and military officials. The event has in recent time been overshadowed by a souring transatlantic relationship.

The tensions have made themselves obvious through, for instance, Europe’s wariness about Donald Trump’s partial troop withdrawal from Syria, as well as the Middle East’s backlash over the Pentagon’s assassination of Iranian commander Qasem Soleimani.

Turkey is also among those that have contributed to the worsening of transatlantic ties, as a result of its military offensive in northern Syria, which was condemned by most European countries. France’s President Emmanuel Macron then promptly declared NATO’s “cerebral death”.

While on his campaign trail, Trump himself dubbed NATO “obsolete” and has on more than one occasion urged European member states to speed up meeting their commitments to spend 2 percent of GDP on defence by 2024 and ultimately aim for 4 percent.