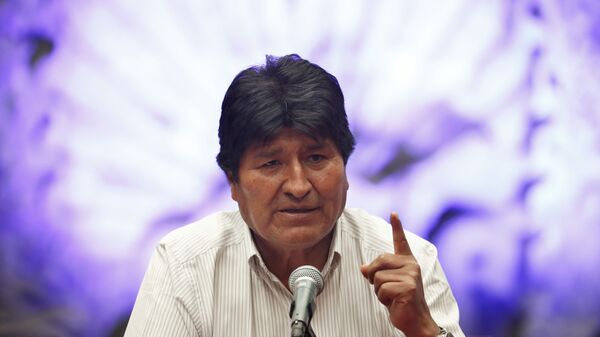 Ekaterina Blinova
All materialsWrite to the author
Tensions are rising over the upcoming Bolivian general vote as Evo Morales' Movement Toward Socialism (MAS) is gaining momentum in the country despite the de facto government's pressure. Alberto Echazu, a journalist from the media platform La Resistencia Bolivia, sheds light on the most recent developments in La Paz.

Bolivia saw the ouster of former President Evo Morales in November 2019 amid protracted social turmoil over alleged election fraud. Now the country is going to the polls again and 3 February marked the deadline for presidential candidate selection.

Bracing for the new snap general elections the de facto Jeanine Anez government invited representatives of the United States Agency for International Development (USAID) that was expelled from Bolivia in 2013 and the Organisation of American States (OAS) to monitor the vote scheduled for 3 May.

Despite La Paz' crackdown on Evo Morales' Movement Toward Socialism (MAS) and opposition media, the party continues to command general support among Bolivians with its presidential and vice presidential candidate Luis Arce and David Choquehuanca leading the polls by a considerable margin. According to some February polls Luis Arce received between 26 to 37 percent of voter intentions while his closest contender, right-wing candidate Luis Fernando Camacho, was at between 11 and 17 percent.

Bolivia's MAS presidential candidate, Luis Arce, is being carried through the streets of La Paz on the shoulders of supporters. No other candidate is getting these crowds. pic.twitter.com/fFPWJ4c9fN

​The de-facto government of Jeanine Anez is dissatisfied with this state of affairs and is trying to throw sand in the gears of MAS, says Alberto Echazu, a journalist with the left-wing media outlet La Resistencia Bolivia.

"First, they attempted to proscribe the whole party, and not having been able to do it now they seek to ban Luis Arce’s presidential candidacy", the journalist notes. "Another clear act of violation was the start of a process to purge people from the electoral register, especially in the rural areas, where MAS dominates the voting completely. This is a clear attempt to reduce MAS’ voting, as they are aware that a first-round victory for MAS is a real possibility".

On 21 January, Bolivian prosecutor Heidi Gila announced a corruption investigation against Luis Arce accusing him of alleged misappropriation of the Indigenous People and Farmers’ Development Fund (FONDIOC) in 2015, while serving his tenure as the country's minister of economy and finance. On 29 January, four days before the candidates' registration deadline, Arce was summoned to testify at the Attorney General’s Office. The hearing was delayed after the legal defence team of the MAS presidential candidate requested time to review the documents.

Bolivia's MAS candidate, Luis Arce, has just been released after giving evidence on the fake charges against him. It's understood that the hearing has been suspended.

He was held aloft by supporters outside. International pressure will be important in keeping him out of jail. pic.twitter.com/HOMbz5q77y

​Arce denounced the probe as the right-wing interim government's apparent attempt to expel him from the 2020 presidential race. He drew attention to the fact that the corruption case was launched immediately after he had been picked by MAS as its candidate on 19 January.

"The case does not have any grounds, as the majority of cases they have carried against former authorities and party leaders and militants", says Echazu. "The people responsible for the FONDIOC matter were sent to prison by the Morales administration, most notably the Rural Development and Land Minister Nemesia Achacollo. Arce has nothing to do with this case. The effect of this probe on Arce's campaign could be the impediment to carry out the campaign in a normal way, not being able to go across the national territory, as it is accustomed in Bolivia".

According to the journalist, "if the case ends up putting his presidential race under question, it would mean the scandalous confirmation of the political persecution in the eyes of the international community and the attempt to boycott MAS´ candidacy, creating major outrage among the people, so it would be a huge mistake on their part".

Why Morales is Running for Bolivian Senate

Meanwhile, former Bolivian President Evo Morales, who was granted a political asylum in Argentina, announced that he would run for the Bolivian Senate despite the de facto government in La Paz issuing an arrest warrant, accusing the ex-president of sedition and terrorism.

Speaking to La Nacion, an Argentine newspaper, on 31 January, Morales explained his decision to participate in the Bolivian legislative vote: "The United States is targeting me, and I remember perfectly well what happened in Libya and Iraq", he said in an apparent reference to the fate of Muammar Gaddafi and Saddam Hussein. "That is one of the reasons for being a candidate for [3 May] general elections – to shield me from these threats".

According to Echazu, this is an interesting and bold decision as "[Morales] could lead the party legislators in a way that the country has not seen before when he was a parliamentarian, even though the decision comes with the risk of detention upon his arrival to Bolivia".

"Once he is an elected senator, he has parliamentary immunity", the journalist explains. "If Morales is elected senator (highly likely if his candidacy is not proscribed) it would mean a historical change in the presidential rule that is typical in Bolivia and Latin America, making him the main figure in the future government, even without being president".

The journalist notes that the international situation is seemingly changing in favour of Morales. In early January the de facto Anez government reported that Interpol activated an international arrest warrant for Morales. However, on 29 January Interpol notified La Paz that its request for an arrest warrant against Morales over alleged "terrorism and sedition" was rejected as it did not comply with the organisation's statute.

"I believe that this unexpected decision by Interpol of rejecting the arrest request responds to the fact that the de facto government has not been careful with its international image and they are seen as having taken power via a coup", Echazu adds.