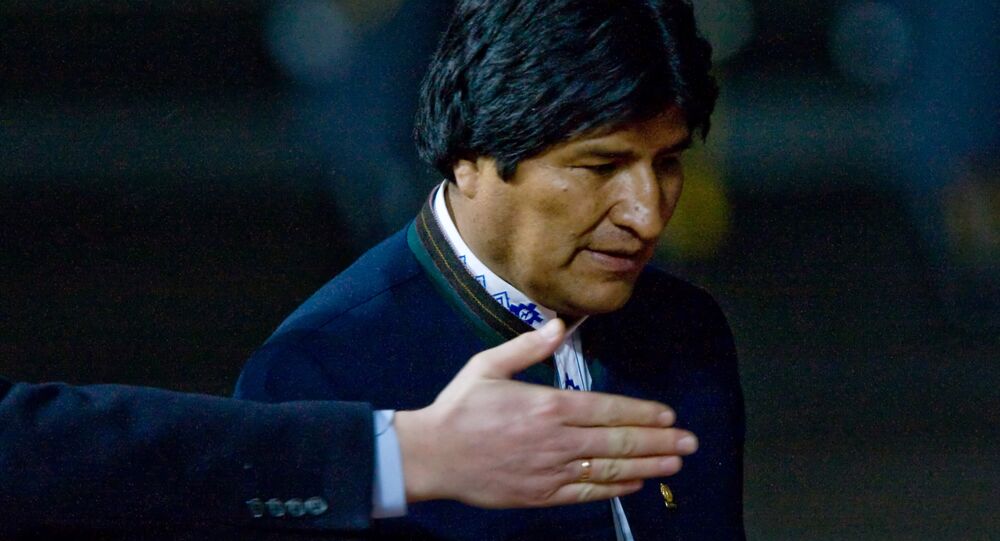 Former Bolivian President Evo Morales has not given up his political activity after fleeing the country. Argentine political analyst Gonzalo Fiore Viani has explained how Buenos Aires sees Morales' attempts to maintain control over the situation in Bolivia and how the Fernandez government could mediate tensions in the country.

"I'll be back," ousted Bolivian leader Evo Morales told Reuters on Tuesday, pledging to return to the country in a year. He is currently residing in Argentina where he moved from Mexico being granted political asylum by the new government of Alberto Fernandez.

On 19 December, the Argentine president announced that Buenos Aires "will not hand over for any reason" Morales after the Bolivian Prosecutor’s Office sent the former president an arrest warrant, accusing him of sedition and terrorism.

Jeanine Anez, who took the reins of the Bolivian government after Evo Morales had been expelled by the military and right-wing opposition in November, has repeatedly accused the former president of plotting unrest from exile.

Being forced to resign on 10 November, Morales immediately went to Mexico, the first Latin American state that granted an asylum to him. However, on 12 December the former Bolivian president left for Argentina, where he "felt more comfortable", according to Argentina's Foreign Minister Felipe Sola.

"I think Evo Morales went to Argentina because it is closer to Bolivia," suggests Gonzalo Fiore Viani, a lawyer and political analyst from Cordoba, Argentina. "From the Argentine border he can organise the opposition to the Anez regime in Bolivia and prepare Movement Toward Socialism (MAS) for the upcoming elections."

The asylum provided by Buenos Aires to Morales didn't come without strings: Sola specified that the Argentine government does not want Evo Morales nor any other refugees to use the country as a staging ground for political activity, and advised against making public statements.

However, the very next day, the former Bolivian leader issued a harsh statement on Twitter lambasting the Anez government for what he called the aim to privatise and sell out the country's strategic companies to transnational corporations.

The tweet came on the heels of a statement by de facto Bolivian Minister of Productive Development and Plural Economy Wilfredo Rojo that the companies run by the state "show signs of inefficiency".

Ten days later, Morales announced that his MAS party would hold an event on the border with Bolivia to pick up candidates for next election. To that end, he decided to summon 29 leaders of the MAS from the nine departments to Buenos Aires on 29 December, as he told Radio La Red, an Argentine radio station.

Viani downplays Sola's statement about the restrictions placed on Morales' political activism: "The declarations Felipe Sola made about that were contradicted later by himself," the political analyst opined.

On 15 December, Cabinet Chief Santiago Cafiero told daily newspaper La Nacion that Morales would be allowed to make political statements during his stay in Argentina.

At the same time, the lawyer has expressed doubts that the Fernandez government would tolerate any sort of a Bolivian "government in exile", should Morales go for this option.

"That could lead to very serious confrontations not only with the US but also with other countries from the region like Brazil, Uruguay or Paraguay", Viani believes.

According to the analyst, "the best scenario for Morales is to recover power and win the elections with the candidate he eventually chooses to support".

Nevertheless, Viani admits that "it's very hard to believe that the next elections, under a regime born during a coup d’etat, can be fair."

"Drawing parallels with Argentine history, after the military coup that had overthrown Juan Domingo Perón's government in 1955, Peronism was prohibited for 17 years and all elections during that period were not clean".

On the other hand, if the vote is fair, a MAS candidate would stand a strong chance of winning, he suggests, adding that "to that end there should be impartial international organisations and governments watching the elections".

If the Bolivian Crisis Escalates, Fernandez May Step In to Mediate

Meanwhile, tensions continue to simmer in Bolivia. On 24 December, Bolivian journalist and writer Ollie Vargas reported that the indigenous inhabitants of the country's Chapare region – Morales' former stronghold - had recently ousted the police authorities and now are bracing for a government crackdown. "If it survives, it will be the base from which the left resurrects its national project," Vargas foresees.

Another large anti-coup rally today in Bolivia's Chapare region. Those here have reiterated that they do not recognise the authority of the coup government, Evo is still their president. pic.twitter.com/dx38J9Y6IV

​"I think that as long the [Anez] regime can assure free elections, the social conflict will not escalate," Viani presumes. "But the consequences could be very bad if there isn't a legal and institutional solution to the conflict."

Commenting on the potential spread of indigenous resistance in Bolivia, the lawyer draws attention to the fact that much of South America has recently been engulfed by protests.

"The region is very unstable, with conflicts not only in Bolivia but also in Chile and an uncertain political situation in Brazil," he says. "The region is a peaceful zone and the last time it was on the verge of an armed conflict was in 2010, between Venezuela and Colombia."

He recalls that at that time former Argentine President Nestor Kirchner and then-president of the UNASUR mediated in the conflict between Venezuela and Colombia.

"I think that if the situation escalates on the Bolivian borders, Fernandez has enough legitimacy to do the same thing Kirchner did and bring peaceful solutions for every party involved," he observes.