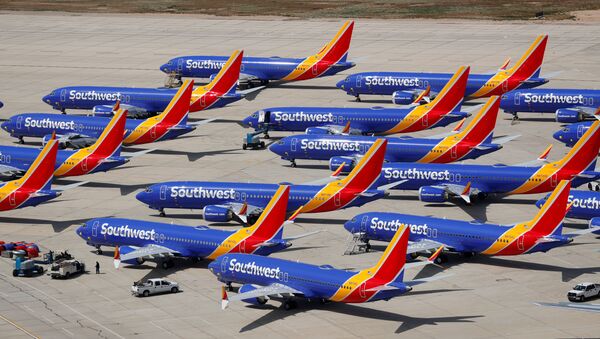 © REUTERS / Mike Blake
Subscribe
Following an 18-month investigation, the US government is accusing American carrier Southwest Airlines of failing to prioritize passenger safety and is also claiming the Federal Aviation Administration (FAA) has lacked proper oversight of the airline in recent years.

A draft audit report from the US Department of Transportation’s Office of the Inspector General (OIG), obtained by the Wall Street Journal, claimed that for a two-year period, Southwest flew over 17 million passengers on planes that had “unconfirmed maintenance records,” according to the newspaper.

Furthermore, the outlet reported that the FAA’s oversight of Southwest was characterized as “lax, ineffective and inconsistent.” The draft alleged that there were no clear signs that the government agency carried out enforcement actions of any kind after it became aware of the airline’s lapses in proper safety procedures.

In one particular instance, a Southwest jet smashed two wingtips on the runway while attempting to land during high winds in 2019, according to the draft audit.

The report specifically referenced FAA managers at the agency’s Dallas/Fort Worth, Texas, office who supervised Southwest - which is headquartered in Dallas - and allowed the airline “to fly aircraft with unresolved safety concerns.” According to the audit, almost two-thirds of the 46 FAA employees interviewed during the OIG’s investigation “raised concerns about the culture at Southwest.”

“It is clear that the Agency is not yet effectively navigating the balance between industry collaboration and managing safety risks at the carrier,” the report said of the FAA.

Southwest has since responded to the draft audit, telling the WSJ that it rejects the report’s “unsubstantiated references to Southwest’s Safety Culture” and asserted that it meets or exceeds requirements set by the government.

“We have communicated our disappointment in the draft audit report to the OIG and will continue to communicate any concerns directly with its office,” a Southwest spokeswoman said in an email to the outlet. “Our friends, our families board our aircraft and not a single one of us would put anything above their safety.”

Southwest shares have dipped about 2% recently amid a combination of this draft report and travel concerns regarding the spread of the coronavirus worldwide, reported Reuters.