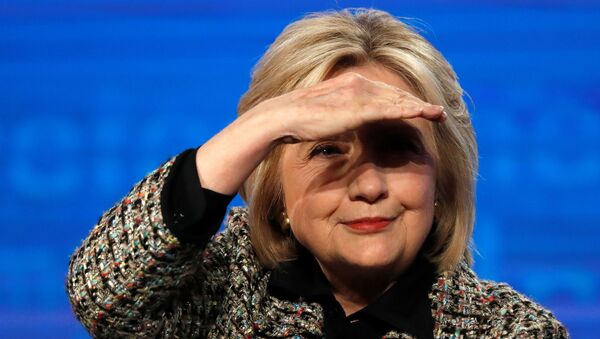 © REUTERS / MARIO ANZUONI
Subscribe
The clip was discovered by journalist Jeremy Kaplowitz, who shared it on Twitter on 28 January, captioning that it is “making me go fully insane”.

A Hillary Clinton campaign advert dated 2008 and the former secretary of state have generated a buzz on social media, as the  ad parodies the ambiguous ending from the HBO drama The Sopranos.

The footage, posted on Twitter by journalist Jeremy Kaplowitz, bears the caption:

“I don't have anything political to say about this but my friend liam told me about this hillary ad from 2008 that's a parody of the sopranos finale where she dies (?????) at the end and it's making me go fully insane. i'm furious every one of my friends didn't tell me about this.”

i don't have anything political to say about this but my friend liam told me about this hillary ad from 2008 that's a parody of the sopranos finale where she dies(?????) at the end and it's making me go fully insane. i'm furious every one of my friends didn't tell me about this pic.twitter.com/cvkpvnkWT0

​The video, starring the future secretary of state and her husband, former US president Bill Clinton, shows her playing the character of mafia boss Tony Soprano, browsing jukebox selections in a diner booth. Her husband Bill Clinton, portraying the part of Carmela, is alongside her.

The camera cuts to Hillary Clinton ordering carrots instead of the Soprano clan’s beloved snack - onion rings – in an apparent bid to make healthier choices.

Just like Tony’s daughter Meadow in the series, Hillary Clinton’s daughter Chelsea drives up outside in her car and has a tough parallel parking moment.

A cameo appearance is given by Sopranos’ actor Vince Curatola, whose character Johnny Sack died of cancer long before the finale of the show.

The campaign video finale echoes the final scene from the drama, by suddenly cutting to black, leaving viewers guessing as to what happened.

In its time, the finale of the HBO drama sparked a debate among fans as to whether Tony Soprano ultimately dies.

In the campaign advert it is left to the imagination whether Hillary Clinton meets a grim fate.

Netizens were tickled by the parallels between the drama finale and the advert.

This is practically avant-garde

Indistinguishable from the Tim & Eric aesthetic

​Some joked that the advert could have had a greater impact if it had reached a larger audience.

had more people seen this she would have won

​Some twitter users mentioned having seen the clip before.

this was made in my hometown diner during my senior year of high school and I've been telling everyone I meet about it for twelve years... glad it lives on

​Other fans took issue with the quality of the campaign advert.

That is so weird! The quality of it looks like somebody hired the director of Birdemic (with some form of basic budget) to do the Sopranos parody. Even if they managed to hire Tim & Eric, it couldn't be as awkward as this.

bill is SO BAD in these things

Meadow Soprano was a more productive member of society than Chelsea Clinton is.

My favorite thing about this is the giant basket of carrot sticks. You know she looks out for Bill and makes sure he eats like a cartoon rabbit.

​The hugely successful drama, starring James Gandolfini as Tony Soprano and Edie Falco as his wife Carmela, ran on HBO for seven seasons between 1999 and 2007, and won 21 Emmys.