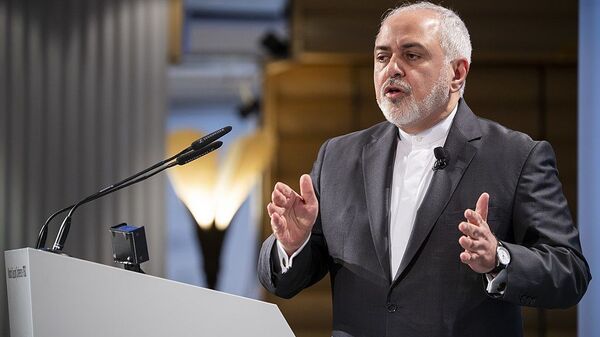 Oleg Burunov
All materialsWrite to the author
On Wednesday, PNA President Mahmoud Abbas reportedly warned Israel that the Palestinians would scrap their security agreements with the Jewish state as a result of their support for US President Donald Trump’s Middle East peace plan.

Iranian Foreign Minister Mohammad Javad Zarif has slammed the US President’s recently unveiled “deal of the century” to resolve the Israeli-Palestinian conflict as the “highway to hell”.

“Could [Nelson] Mandela ever have imagined re-emergence of BANTUSTANS, decades after liberation of South Africa?" Zarif tweeted on Wednesday, adding that the US “never was—and can never be—anything resembling an honest broker”.

Could Mandela ever have imagined re-emergence of BANTUSTANS, decades after liberation of South Africa?

"Vision for Peace" looks more like "Highway to Hell".

We Muslims need to wake up: The U.S. never was—and can never be—anything resembling an honest broker.#Unite4Palestine pic.twitter.com/yVh8rLjYwE

A Bantustan was a territory set aside by the white-dominated government  of South Africa for the country’s black population as part of the apartheid policy during the mid- to late 20th century.

In a separate tweet earlier this week, Zarif described the Trump peace plan as “simply the dream project of a bankruptcy-ridden real estate developer”.

“It is a nightmare for the region and the world and, hopefully, a wake-up call for all the Muslims who have been barking up the wrong tree”, he added.

The so-called "Vision for Peace" is simply the dream project of a bankruptcy-ridden real estate developer.

But it is a nightmare for the region and the world

And, hopefully, a wake-up call for all the Muslims who have been barking up the wrong tree.#LetsUniteForPalestinians pic.twitter.com/j2CJ9JaH9c

Instead of a delusional “Deal of the Century”—which will be D.O.A.—self-described "champions of democracy” would do better to accept Iran's democratic solution proposed by Ayatollah @khamenei_ir:

A referendum whereby ALL Palestinians—Muslim, Jew or Christian—decide their future.

This was preceded by Zarif calling Trump’s peace plan “delusional” in a tweet posted on Monday.

Zarif’s remarks came as Palestinian President Mahmoud Abbas sent a handwritten note of warning to Israeli Prime Minister Benjamin Netanyahu, pointing out that the Palestinian National Authority (PNA) “now sees itself as free to disregard the agreements with Israel, including security cooperation”.

This was preceded by Abbas rejecting the Middle East blueprint as the “slap of the century and “conspiracy” which he pledged “will not go through”.

Trump, for his part, touted the plan as a "realistic two-state solution”, which was echoed by Netanyahu who said that “the deal of the century is the opportunity of a century, and we're not going to pass it by”.

The plan, also known as “President Donald Trump’s Vision for Peace, Prosperity, and a Brighter Future for Israel and the Palestinian People”, was unveiled by POTUS on 28 January.

For decades, Israel has been in conflict with the Palestinians, who are seeking diplomatic recognition for an independent state on the territories of the West Bank, including East Jerusalem, and the Gaza Strip. Israel has been refusing to recognise Palestine as a state and has defied several UN resolutions in the process.