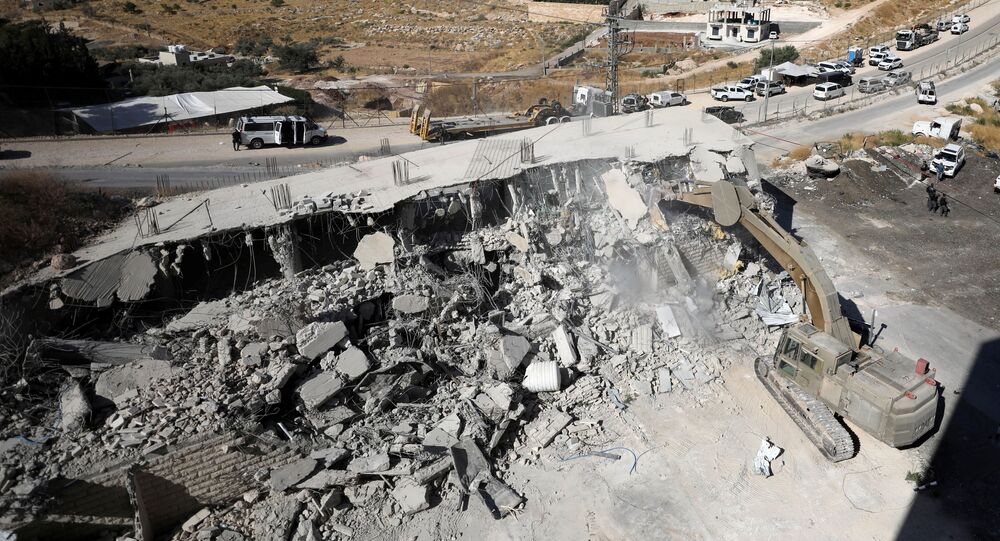 GAZA (Sputnik) - Israel has begun demolishing houses in the village of Wadi Hummus in the Sur Baher neighbourhood, located near Jerusalem, despite the objections of locals, human rights activists, and the Palestinian authorities who are de jure owners of the village, the Palestine Liberation Organization (PLO) said on Monday.

"The demolition in Sur Baher began early in the morning with [the razing] of four houses simultaneously," the PLO's negotiation office said.

Israeli soldiers and border guards entered the village before the demolition began and forced families living in the houses, including children and old people, Palestinian, Israeli and international activists, to leave, according to the Anti-Occupation Collective human rights group.

According to the Ir Amim rights watchdog, Israel plans to demolish 10 residential buildings with approximately 70 apartments. The activists insist that the village, which is an actual part of East Jerusalem's Sur Baher quarter, is situated outside the municipal borders of the Israeli-annexed city, partly in the so-called Zones A and B of the West Bank, which fall under the Palestinian National Authority's civilian control.

The Israelis justify their actions by security considerations and say that the buildings were built too close to the separation barriers encircling the West Bank. The demolition warrants were issued based on a military directive of 2011, which prohibits construction within 250 meters (820 feet) of the separation barrier.