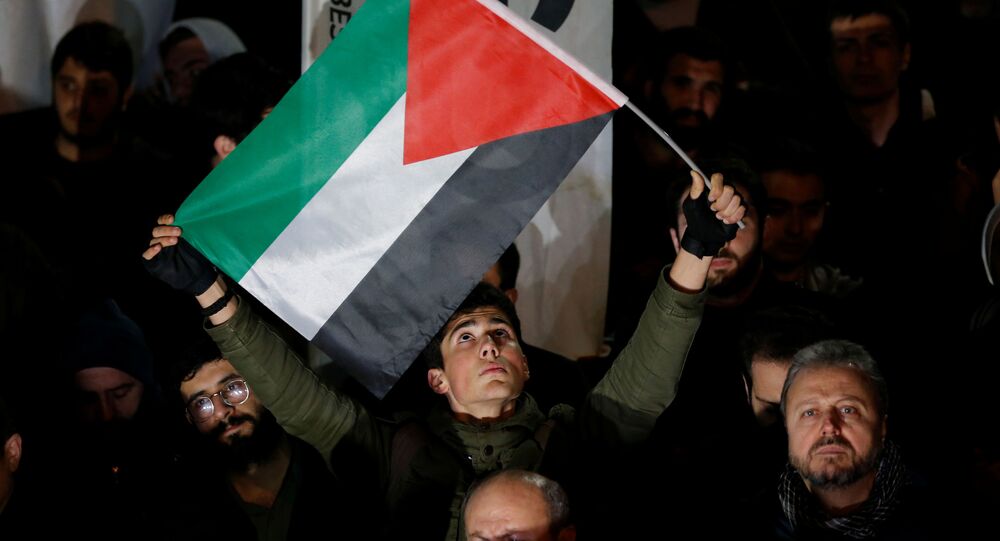 After months of anticipation, US President Donald Trump has finally revealed his "deal of the century" plan that aims to resolve the Israeli-Palestinian conflict at a press conference attended by top Israeli and American officials as well as the ambassadors of several Arab states that have no diplomatic relations with Israel.

The 181-page-long initiative presupposes a two-state solution with Jerusalem remaining in Israeli hands. It also stipulates some land swaps. While Israel is allowed to annex 40 percent of the West Bank, Palestinians have been promised several territories in the Negev desert.

In addition, according to the plan, Palestinians are set to get an independent Palestinian state within four years, provided that they drop support for terror and disarm such militant groups as Hamas and the Islamic Jihad.

For the Palestinians to be able to swallow the bitter pill, Trump has promised $50 billion dollars and constant help to Palestinian President Mahmoud Abbas, who - as expected - rejected the initiative at his own press conference in Ramallah.

Can Palestinians resist the deal?

Ashraf Al Ajrami, a former prisoners affairs minister of the Palestinian Authority, believes that the majority of people will not support the American deal.

He thinks that no money can change that. While Trump believes the cash flow could improve the crippling Palestinian economy, create "tens of thousands of jobs" and fight "unacceptable" levels of unemployment, for Al Ajrami this is a drop in the ocean.

"We have received large sums of money before but this cash goes to pay salaries so at the end of the day the ordinary Palestinians will not feel the difference."

Since 1993, when the Palestinian Authority was established, the Palestinians have received more than $30 billion in international aid, with the American government responsible for providing 45 percent of all funds, according to estimates provided by the Jerusalem Institute for Justice, an Israeli research centre that aims to protect the legitimate standing of the State of Israel.

For a peace deal to succeed, Al Ajrami believes the US needs to give Palestinians land they can cultivate and develop as well as start projects that would create jobs and improve the Palestinian economy.

Until that happens, Al Ajrami says "we have nothing to talk about".

A blow to security

Meanwhile, Palestinians in the West Bank and Gaza continue to vent anger at the US announcement. Despite stormy weather, hundreds are expected to clash with Israel's security forces at friction points later today, with Abbas threatening he would not prevent any violence.

Al Ajrami believes the situation can only get worse, as the Palestinian Authority, angered by the US announcement, might decide to scrap its security cooperation with Israel, harming regional stability.

Although similar threats have been voiced in the past, this time around "it will be different," believes the former minister, simply because "the US administration has deprived Palestinians of all hope".

Throughout the years, the PA has not only helped Israel prevent Palestinian militants from launching terrorist attacks, it has also cooperated to prevent the "penetration of Iran to the region," Israel Hayom reported.

In 2015 alone, the PA's security forces arrested a third of the suspected terrorists and is reported to have prevented up to 200 attacks against Israel. More recently, it was reported that Ramallah handed out to Tel Aviv the intelligence information that led to November's assassination of Baha Abu Al Atta, a top commander of the Palestinian Islamic Jihad in Gaza.

Regional stability is also at risk, believes the former minister. Two days ago, the spokesperson of Daesh* released a statement declaring war on Israel and calling on 'believers' to attack Jews.

"This deal of the century complicates more than it solves. It not only shatters the fragile balance of the region, it can also lead to domestic instability. If Abbas dares to accept the plan, it will lead to a revolt, as the Palestinian street will never give its blessing to the move."

* A terrorist organisation banned in Russia and other countries.