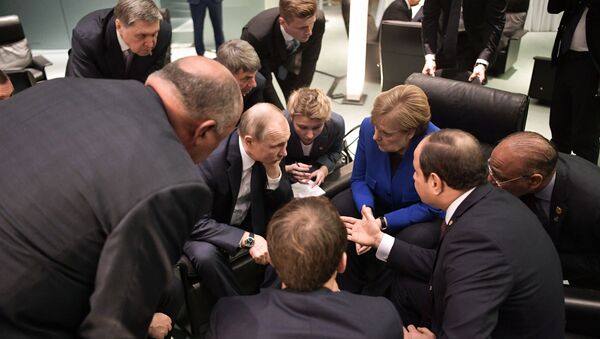 BERLIN (Sputnik) - In a joint statement, participants in Sunday's Berlin conference on Libya have called for the demobilization of all Libyan armed groups and the subsequent integration of eligible fighters into a unified army and law enforcement branch.

"We call for a comprehensive process of demobilization and disarmament of armed groups and militias in Libya and the subsequent integration of suitable personnel into civilian, security and military state institutions, on an individual basis and based on a census of armed groups personnel and professional vetting. We call upon the United Nations to assist this process," the document's article 12 reads.

In the chapter pertaining to security sector reforms, participants have called for restoring the monopoly of the state for the legitimate use of force.

"We support the establishment of unified Libyan national security, police and military forces under central, civilian authority, building upon the Cairo talks, and the documents produced therein," the document's article 36 reads.

The participants also called for an end to the movement of military equipment and troops across the country.

"We call for the termination of all military movements by, or in direct support of, the conflict parties, in and over the entire territory of Libya, starting from the beginning of the ceasefire process," the document reads.

"We commit to refraining from interference in the armed conflict or in the internal affairs of Libya and urge all international actors to do the same," the document says.

Participants have urged the UN to facilitate ceasefire talks between the country's warring sides, while calling on the United Nations Security Council (UNSC) to impose sanctions against those who violate the ceasefire.

"We call upon the United Nations to facilitate ceasefire negotiations between the parties, including through the immediate establishment of technical committees to monitor and verify the implementation of the ceasefire," the document reads.

"We call upon the UNSC to impose appropriate sanctions on those who are found to be in violation of the ceasefire arrangements and on Member States to enforce these," the statement notes.

On Friday, Libya's National Oil Corporation (NOC) issued a statement warning that shutting down oil terminals would have far-reaching negative consequences for the national economy, as protesters reportedly entered and blockaded the Zueitina oil port in eastern Libya. Some Libyan tribal leaders and public figures close to LNA leader Khalifa Haftar called on Thursday for a blockade of the country’s oil terminals in protest against the intervention of Turkish troops in support of the UN-backed Government of National of Accord (GNA).

Participants of the Berlin conference called for refraining from hostile actions against oil facilities in Libya.

"We stress that the National Oil Corporation (NOC) is Libya’s sole independent and legitimate oil company, in line with UN Security Council Resolutions 2259 (2015) and 2441 (2018). We urge all parties to continue to guarantee the security of its installations and refrain from any hostilities against all oil facilities and infrastructure. We reject any attempt at damaging Libya’s oil infrastructure, any illicit exploitation of its energy resources, which belong to the Libyan people, through the sale or purchase of Libyan crude oil and derivatives outside the NOC’s control and call for the transparent and equitable distribution of oil revenues," the document reads.

On 17 December, 2015, the Libyan Political Agreement on the settlement of the internal conflict was signed in Morocco’s Skhirat, under the auspices of the United Nations. The main point of the document, which took 14 months to coordinate, dealt with the formation of an interim Government of National Accord (GNA), which would operate during a transitional two-year period. New parliamentary elections were also promised in the agreement, but did not come to pass.

Participants expressed their commitment to accept and support the intra-Libyan political process.

"We commit to accepting and supporting the outcome of this intra-Libyan political process," the document says.

Conference participants expressed support for the 2015 Libyan Political Agreement as a viable framework for a  political solution to the conflict in the country.

Participants also highlighted in the statement that they would create an international committee to coordinate follow-up actions.

Senior-level plenary sessions will be held each month to evaluate the implementation of the conference's conclusions and, if necessary, "exert leverage".

Four technical groups will meet at the expert level twice a month during the first implementation stages. The groups will be led by UN representatives and work in four areas — address obstacles to the implementation, exchange information, coordinate operational requirements and support the mandate of the UN Security Council.