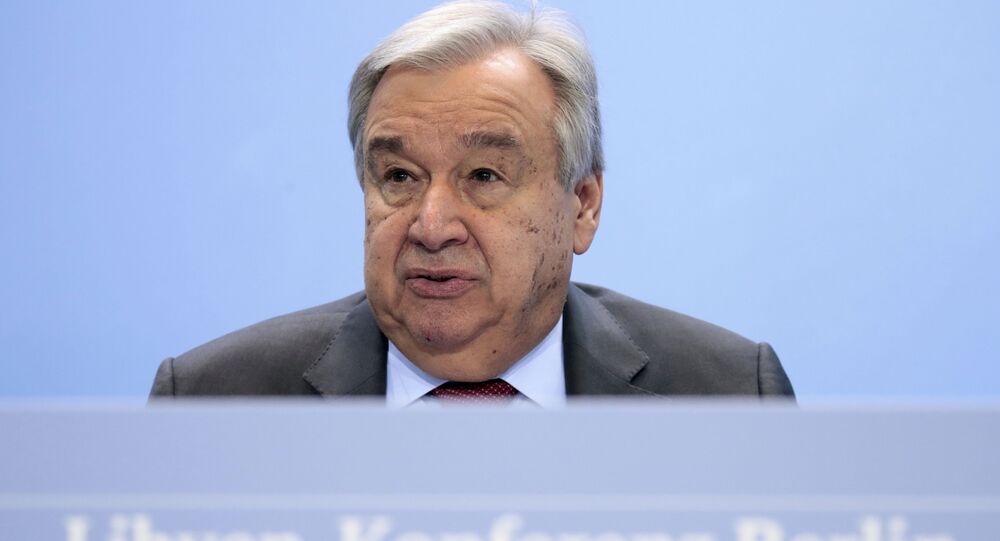 UN Concerned With Closure of Oil Ports in Libya - Guterres

BERLIN (Sputnik) - The United Nations is concerned about the closure of oil fields in Libya, UN Secretary-General Antonio Guterres said at a press conference in Berlin on Sunday.

Representatives from a number of countries and organizations, including Russia, the United States, Turkey, Egypt, the European Union, the United Nations and the African Union have met in Berlin on Sunday to find solutions to the conflict in the North African country. The Berlin conference follows the intra-Libyan talks in Moscow that took place last week, mediated by Russia and Turkey.

"We are very worried with the fact that several ports, several harbors from where oil is exported, were closed and that one very important oil field, as I saw, stopped production today [Sunday]. Obviously, we believe that part of a more comprehensive solution will have to be an effective reform of the National Oil Company, transparency established ... and we hope that it would be possible to establish normality," Guterres said after concluding the Berlin conference on Libya.

On Saturday, the Libya National Oil Corporation declared a force majeure after LNA forces had blocked oil exports from a number of ports. The company said that this would result in a loss of crude oil production of 800,000 barrels per day and daily financial losses of approximately $55 million.

Libya has been torn apart between the two rival administrations since 2011, when its long-time leader Muammar Gaddafi was overthrown and killed. The Libyan National Army, led by Field Marshal Khalifa Haftar, currently controls the majority of territory in Libya's eastern regions, while the Tripoli-based UN-backed Government of National Accord, led by Prime Minister Fayez Sarraj, has a foothold in the country's west.