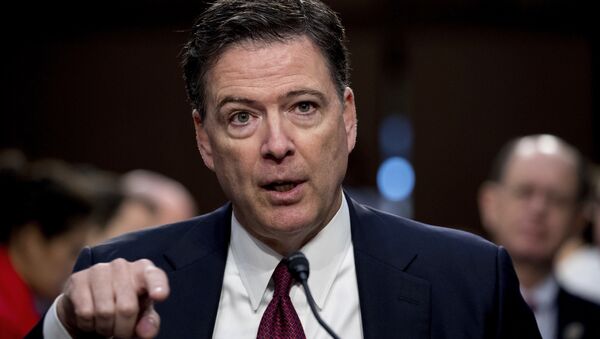 A new investigation into the possible leaking of a classified Russian intelligence document to reporters by former FBI Director James Comey has reportedly been launched by the US Justice Department. While some claim the case is an effort by US President Donald Trump to detract from impeachment, one expert says it may expose a hidden agenda.

Daniel Lazare, a journalist and author of three books - “The Frozen Republic,” “The Velvet Coup” and “America's Undeclared War” - joined Radio Sputnik’s Loud and Clear on Friday to discuss the alleged investigation by the Justice Department’s National Security Division and provide his analysis on its possible outcomes for Comey.

“Everybody and their cousin were calling the nearest reporter in order to give an inside scoop on how Donald Trump was misbehaving,” he said. “One reason they’re concerned about Jim Comey is that if Jim Comey was leaking, then that was a very powerful signal to others in the bureaucracy that they were free to leak as well - because Comey was the head of the FBI.”

According to a New York Times report by Adam Goldman, published Thursday, intelligence operatives with the Dutch General Intelligence and Security Service (AIVD) hacked Russian computers and provided the US government with an email exchange between Representative Debbie Wasserman Schultz (D-FL), then the chair of the Democratic National Committee, and Leonard Benardo, an official with the George Soros-founded Open Society Foundation, that occurred during the 2016 US presidential campaign.

The alleged email archive showed that Wasserman Schultz suggested then-US Attorney General Loretta Lynch would see to it that the email case against former Secretary of State Hillary Clinton would not go to prosecution.

“Typically, senior Justice Department officials would decide how to proceed in such a high-profile case, but Mr. Comey was concerned that if Ms. Lynch played a central role in deciding whether to charge Mrs. Clinton, Russia could leak the email,” Goldman wrote.

Both Wasserman Schultz and Benardo have denied that the exchange ever took place. However, the fact remains that Comey’s odd July 2016 press conference on the FBI’s decision to not pursue a criminal case against Clinton leaves open the possibility that the then-director was engaged in a coverup.

“If the email is true, then … the implications are startling,” Lazare said, “but if it’s false, as Wasserman Schultz said and Benardo maintain, then where does that leave us?”

“If they press ahead with the prosecution and really try to nail Comey on charges of leaking defense information, then that would be a major development,” he explained.

Lazare concluded by noting that he finds it odd that Comey was “so spooked by the prospect of [the Wasserman Schultz-Benardo document] being put out to the public that he essentially decided to ‘end run’ his boss in a completely unprecedented manner and make the startling [July 2016] announcement … in order to safeguard the independence of the FBI. That strikes me as a strange kind of violation of protocol and one’s loyalties.”