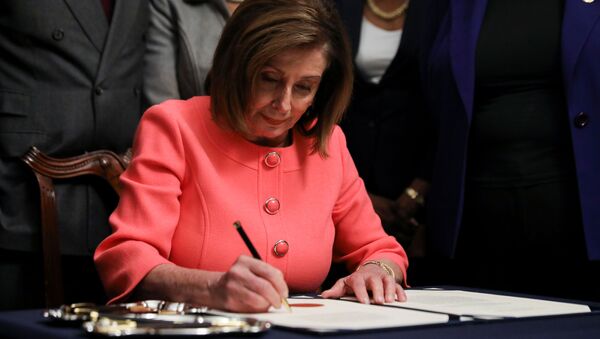 The US House of Representatives sent two articles of impeachment previously approved by the body to the Senate, where US President Donald Trump will stand trial for high crimes and misdemeanors. Trump will be the third US leader to stand trial, and proceedings will begin next week.

The House voted earlier Wednesday afternoon 228 to 193 to send articles of impeachment to the Senate, setting in motion events that will lead to Trump’s trial beginning on Tuesday, January 21.

According to protocol, House lawmakers must hand deliver a printed, signed copy to the Senate, which sits in the opposite wing of the US Capitol.

“Make it very clear, this president will be held accountable … today we will make history,” House Speaker Nancy Pelosi (D-CA) said in remarks prior to her signing the documents, which is called “engrossment,” and then delivering them.

The lawmakers then formed a two-by-two procession to march to the Senate chambers and announce the House's decision, which the Senate must then accept. Senate Majority Leader Mitch McConnell (R-KY) accepted their delivery before setting in motion the procedures that would begin Trump's trial.

​Prior to the vote, Pelosi announced seven “managers” who will serve as the prosecution in the coming trial: House Intelligence Committee Chairman Adam Schiff (D-CA), who will be the lead manager and who helped manage the inquiry this past autumn; House Judiciary Committee Chairman Jerrold Nadler (D-NY), whose panel drafted the articles of impeachment; House Democratic Caucus Chairman Hakeem Jeffries (D-NY); and Reps. Jason Crow (D-CO), Val Demings (D-FL), Sylvia Garcia (D-TX) and Zoe Lofgren (D-CA).

Today, I have the privilege of naming the Managers of the impeachment trial of the President. #DefendOurDemocracy pic.twitter.com/Y2613Ni3pC

​The two articles of impeachment advanced include one charge of abuse of power and one charge of obstruction of Congress. House lawmakers have alleged that Trump abused his power by pressuring the Ukrainian government into a quid pro quo agreement in which Kiev would only receive anticipated military aid from Washington if Ukrainian President Volodymr Zelenskyy agreed to open an investigation of former US Vice President Joe Biden and his son, Hunter Biden, the latter of whom has invested in the Ukrainian gas company Burisma Holdings.

The second charge against Trump stems from his attempts to stonewall House Democrats’ investigation of the Kiev affair, including his directing executive branch staff not to cooperate with House committee subpoenas.

Pelosi has postponed transmitting the articles for nearly a month in an attempt to extract concessions from the Republican-controlled Senate about trial procedures, such as a promise not to immediately kill the articles without a trial and to permit the admission of new witnesses - terms Senator McConnell agreed to on Monday.

For Trump to be convicted, two-thirds of the Senate, or 67 senators, will have to be convinced of his guilt. Two past US presidents have been put on trial in the Senate, but both Andrew Johnson and Bill Clinton were acquitted. President Richard Nixon was impeached as well, but he resigned before the trial could begin, and President James Buchanan was subjected to an inquiry, but the House found no impeachable offenses.