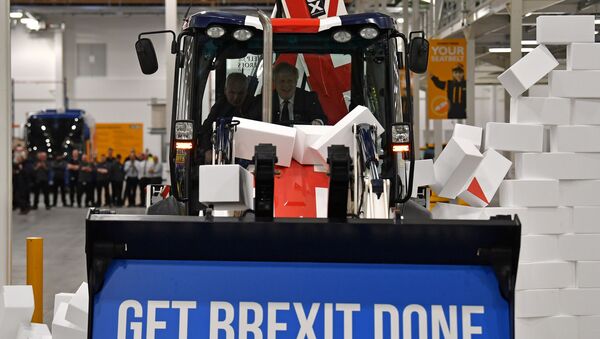 British Prime Minister Boris Johnson has met with European Commission President Ursula von der Leyen today at Number Ten Downing Street, as talks resume over a potential free trade agreement between the UK and the EU. But can a comprehensive divorce bill really be negotiated in such a short time frame?

Sputnik spoke with Brexit Party organiser Pete Durnell to get his views on the matter.

Sputnik: Will Boris Johnson be able to negotiate a trade deal with the EU in just one year? Is he really willing to walk away at the end, or could we see more delay should negotiations go awry?

Pete Durnell: Where there is a will, there’s a way. If both parties are willing; then I believe that perhaps the bare bones of a deal could be in place by the end of December, but the problem is that when the UK signs and passes the withdrawal agreement, the EU will effectively hold all the aces.

The UK will still end up paying fifteen billion pounds a year, for 2020 and we’d still have to implement all EU laws, so essentially everything is exactly the same as if we were full members, except that we’d have no vote and no veto or voice.

On that basis, it would seem that there is very little incentive for the EU to get a free trade agreement in place by the end of this year, and a huge incentive to drag their feet and try and get us to extend the transition period by another year or two.

Sputnik: Would a no-deal Brexit be as bad as many naysayers claim?

Pete Durnell: It’s important to understand that a no-deal Brexit at the end of December this year, is not the same as a no-deal at the end of January, which would be the case if we were not to pass the withdrawal agreement.

If the UK is properly prepared; then WTO rules should really favour the country because we run a massive trade deficit with the EU, so we should be the big beneficiaries of this scenario really.

Sputnik: If Johnson makes a hash of Brexit; how will this affect his political career going forward?

Pete Durnell: It’s widely accepted that December’s General Election was all about Brexit, possibly about how terrible Corbyn would be as well, but we heard “Get Brexit done” at every other breath from Boris Johnson, so he made it all very much about that and he is going to claim that by the end of January that he will have done Brexit, but that is not true as we’ve still got all this transition period and free trade agreement left to resolve.

MPs Submit Amendment to Brexit Bill Requiring Big Ben to Chime on 31 January
I think it will be the defining issue for parliament over the next five years and it will define Boris Johnson as a Prime Minister, so by that token if he screws it up; he is going to be massively damaged and his government with it.

Whether Labour will have sorted themselves out sufficiently in five years’ time to be able to take advantage of that is another question altogether, but I think Boris Johnson will be defined by Brexit.