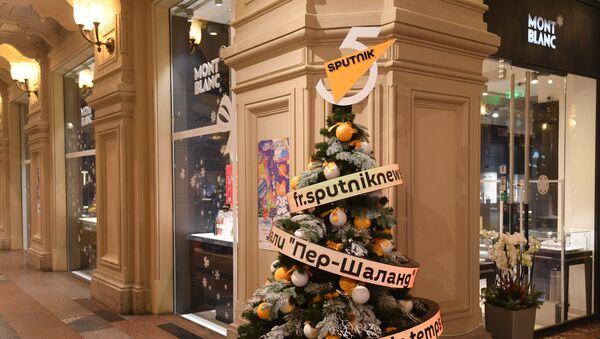 MOSCOW (Sputnik) – On the Christmas Eve, celebrated on the night of 24-25 December by western Christians and some local Orthodox churches, the Christmas News Days from English-, Spanish-, and French-speaking countries kicked off in GUM at the Christmas tree of the international news agency and radio Sputnik.

Till the end of the week, the visitors of the country's main department store can read live reports as well as funny and educational stories from dozens of countries broadcast by the media group on the art object's rolling ticker.

This year Sputnik is celebrating its 5th anniversary, and the Christmas tree became a gift to Moscow residents and guests from the birthday celebrant. In the coming days, the information will be broadcast on it in both Russian and English, as well as in French and Spanish.

Why does traditional British Christmas pudding consist of 13 products? What is the popular French writer Anna Gavalda doing for Christmas? When did Fidel Castro re-instate Christmas holidays in Cuba? GUM visitors can get answers to these and many other interesting questions from the roller titles encircling the Christmas tree.

Sputnik's unique innovative art object on the 1st line of the department store is part of the New Year Trees Exhibition at GUM on Red Square, which is being held for the 12th time already. 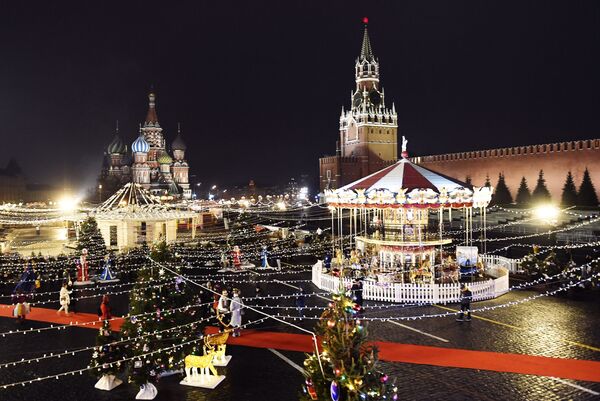 A skating rink and a Christmas market in front of GUM (State Department Store) in Moscow, Russia
© Sputnik / Ekaterina Chesnokova
/
Go to the photo bank

Partner companies of the country's main department store traditionally turn it into a fairy tale forest for almost two months. Everyone can take a stroll around the forest till 19 January. MIA Rossiya Segodnya and Sputnik are media partners of the GUM-Skating Rink, the New Year Trees Exhibition at GUM on Red Square and GUM-Fair.

Sputnik is one of the largest international media bringing together national and regional multimedia websites in 33 languages, analogue and digital radio broadcasting in Russian, English, French and other languages in more than 90 cities around the world and the Web.

Sputnik's news feeds provide information to leading publications 24/7 across the globe in Arabic, Chinese, English, Farsi, and Spanish. Sputnik has a monthly audience of more than 60 million viewers and over 10.5 million subscribers to the Sputnik's China account on Weibo.

Over a thousand people of dozens of nationalities work in 22 editorial centres around the world from Beijing to Montevideo. Sputnik is part of the Rossiya Segodnya International Media Group. Sputnik's head office is located in Moscow.