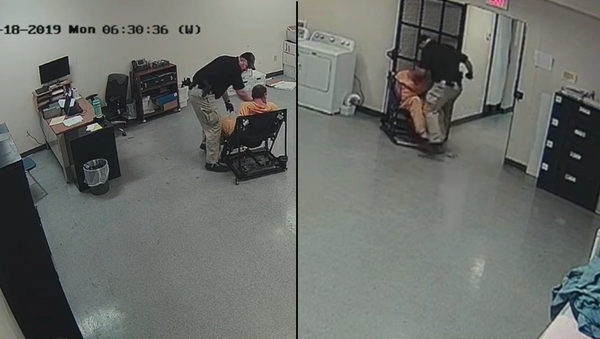 The Federal Bureau of Investigation has been asked to intervene and probe the beating and pepper spraying of an inmate by a former Ohio deputy who struck the man so hard he broke his hand.

Pike County Sheriff’s Deputy Jeremy Mooney recently resigned after surveillance footage captured his November 18 attack on Thomas Friend, a 27-year-old restrained inmate who had been arrested on a misdemeanor charge.

Mooney can be seen using a fogger to pepper spray Friend at around the 2:18 timestamp. Friend, strapped to a chair, then reacts to the substance and ends up tipping his seat over. Nearly 11 minutes pass before the inmate is picked up.

After being propped up, Friend is wheeled inside to a loading dock, and Mooney is seen punching him a total of 11 times during the time the two of them were left alone. Cincinatti.com reported that Mooney attacked the 27-year-old so viciously that the officer had to be treated for a broken hand at Adena Pike Medical Center - the same medical facility Friend was taken to following the incident.

“It was disturbing to watch,” Pike County Prosecutor Rob Junk, who is tasked with bringing charges against Mooney, said earlier this week, according to local outlet WTTE. “After reviewing it, reviewing the reports, I got a hold of the FBI. We made a copy of the case and the videos for them. I requested they review it for any possible federal criminal charges."

While the federal agency has yet to announce the launch of an investigation, Junk also discussed having the Ohio Attorney General’s Office take on the criminal case if the FBI declines to pursue it.

Interim Pike County Sheriff James E. Nelson told the outlet that Mooney’s actions were “an excessive use of force which had no business of happening.”

Sgt. Bill Stansberry, Mooney’s supervisor, was present for a portion of the recorded incident and was placed on administrative leave by the Pike County Sheriff’s Office after a chief deputy was notified of what took place. Stansberry has since been demoted to the rank of corporal and was suspended from the force for two weeks after failing to intervene.

“He is a supervisor. He was present, did nothing to stop it or diffuse the situation,” Nelson said. "Talking with him, I think he realizes he should have said something or done something.”

“The sheriff's office indicated a combination of bath salts and methamphetamine. When Mr. Friend was brought to court after this he wasn’t able to be seen by the judge due to the mental state he was in,” Junk said earlier this week. It’s also alleged that Friend spit at law enforcement officials and attempted to bite an officer at one point.

Nelson argued that despite the 27-year-old arrestee’s behavior, Mooney’s actions were impermissible.

"Anybody’s that’s in this line of work, you know you’re going to be treated like that at times. It’s just the way it is,” he said of his colleagues. "If someone thinks this is OK, they don’t need to be working as a law enforcement officer.”

According to WLWT, the prosecutor noted that the former deputy is seeking a workers’ compensation payout for medical attention he received for his broken hand.