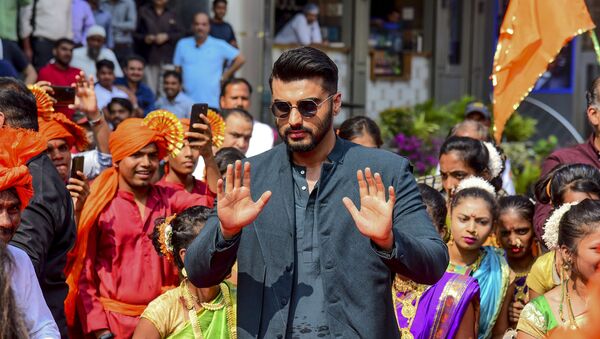 New Delhi (Sputnik): Bollywood actors Arjun Kapoor and Sanjay Dutt star in “Panipat”, which depicts a battle that occurred between the Marathas and the then-Afghan King Ahmad Shah Abdali in 1761. It’s a creation of National Awardee Director Ashutosh Gowariker, known for his 2001 release “Lagaan”.

Rajasthan State chief Ashok Gehlot on Monday asked the country’s Censor Board to take note of Gowariker’s film for allegedly wrongly portraying the role of Maharaja Surajmal, one of the Jat rulers.

He has asked distributors to have a dialogue with Rajasthan's Jat community, some of whose members are said to be offended by the film.

Gehlot's reaction comes a day after Rajasthan Tourism Minister Vishvendra Singh demanded a ban on the screening of the film in northern India to avoid any law and order situation.

"The reactions that are coming about the portrayal of Maharaja Surajmal ji in the film... such a situation should not have been created. The Censor Board should intervene and take cognisance of it and Distributors should immediately hold a dialogue with the people of the Jat community on the screening of the film", NDTV.com news website quoted Gehlot as saying.

He also added that the personalities in a film should be shown in the right perspective so that there is no controversy.

"I believe that art and the artists should be respected but they should also take care that any caste, religion, class, great personalities, and gods are not insulted", Gehlot said.

This is not the first time that a film receives massive backlash, as in the past Sanjay Leela Bhansali’s directorial “Padmaavat” faced heat from Rajasthan state and some other north Indian states over the portrayal of legendary Rajput Queen Padmini.