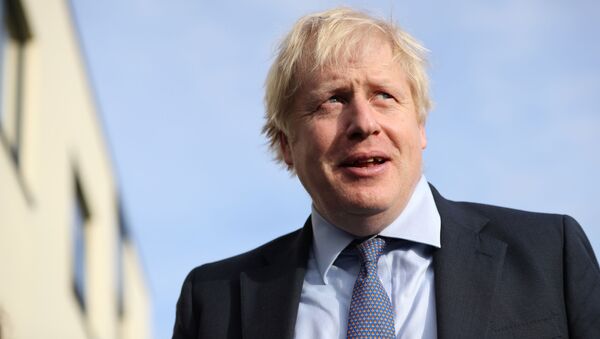 Svetlana Ekimenko
All materialsWrite to the author
As the date of the UK general election set for 12 December is fast approaching, almost every major party leader has subjected themselves to a half-hour interview by BBC’s Andrew Neil, often resulting in a string of negative headlines following his tough line of questioning.

BBC’s Andrew Neil delivered a direct interview challenge to UK Prime Minister Boris Johnson on Thursday night, saying it's "not too late" for the Tory leader to agree to have his policies scrutinised on prime-time television.

In a dramatic "empty chair" monologue for the camera, Neil tore through a list of questions he wanted to ask Johnson ahead of the general election in the UK set for 12 December.

He said he would ask if the Tory leader could really be trusted regarding election pledges that vowed more nurses, new hospitals, funding the NHS and keeping it off the table in any trade talks with the US.

“It was surely not expecting too much that he spend half an hour standing up to me,” queries Neil.

The interviewer, known for meticulous research and unrelenting questioning style, said the BBC has "always proceeded in good faith that the leaders would participate" in an interview, adding:

"In every election, they have - all of them, until this one. It is not too late. We have an interview prepared. Oven-ready, as Mr Johnson likes to say.”

The Conservative leader is yet to agree to face Neil , as Labour Party leader Jeremy Corbyn, Leader of the Liberal Democrats Jo Swinson, First Minister of Scotland Nicola Sturgeon and even Nigel Farage of the Brexit Party have all been grilled by the BBC journalist on his show, Andrew Neil Interviews.

In response, the Conservatives have told the BBC to go and find a better format, as a senior Tory party source was quoted by The Guardian as saying live televised interviews are anachronistic and pointless:

“The public are fed up with interviews that are all about the interviewer and endless interruptions. The format is tired and broken and needs to change if it is to start engaging and informing the public again.”

The Conservative leader himself denied avoiding scrutiny, saying he had taken part in debates, interviews and phone-ins.

Netizens were split as they weighed in on the dramatic TV incident, with some applauding the ferocious interviewer.

Credit where credit's due. Thank you for this, @afneil. It's not just seriously embarrassing for Johnson: it highlights the contrast with every party leader who has come before. A deeply worrying contrast.

That’s how Johnson sees himself, as SO VERY elite, he doesn’t need to bother Or his advisors have advised it’s a good marketing strategy. Johnson also gets to see how other leaders have responded & can work on his notes, now he’s had a full list of questions! but will it work?

Other social media fans were not so sure Boris Johnson should agree to a sit down with the interviewer.

Boris doesn’t really need to have an interview after the absolute train wrecks the other leaders have had. You did the hard work for him by making them look incompetent. He’s just sat at home laughing all the way to number 10 #BackBoris

Why should Boris be blackmailed into an interview by AN? He is still the PM. He has had to deal with a terrorist attack, a NATO Summit & numerous media attacks. I hope the whole BBC debacle is seriously reformed after the election!!!

I am sure he has more important things to do than pander to the likes of the BBC! We saw their agenda last week on Marr!

Invite to answer questions on #Brexit, the @Conservatives Parties plans for the economy and it's tax & spending plans by all means, but an invitation to character assassination by TV?

Nobody in their right mind would accept such an invitation!

The challenge itself full of bias!

You appear to have an agenda. Boris has made the right decision.

​A similar ‘empty chair’ incident during the election campaign in the UK occurred on 6 November when one of the hosts of Sky News Breakfast, Kay Burley, fumed at Conservative Party Chairman James Cleverly for failing to come on the show, which, as Burley insists, she had been promised.

The empty chair was the focus of Burley's sarcastic comments as she read out a list of pressing questions that she was planning to ask the Conservative Party chairman.

James Cleverly, however, dismissed Burley's tirade, saying he was never booked for her show.