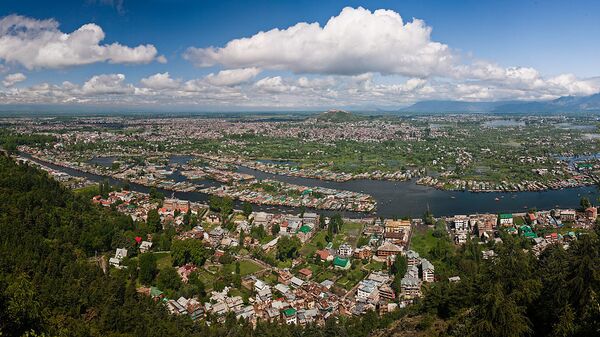 CC BY-SA 3.0 / KennyOMG / View of Dal Lake and the city of Srinagar
Subscribe

New Delhi (Sputnik): In 1990, a mass migration of Hindus from India administered and Muslim majority Kashmir took place after a violent armed insurgency erupted in the Valley.  Over 62,000 families are registered as Kashmiri refugees, including Kashmiri Pandits and some Sikh and Muslim families.

Showcasing the plight of Kashmiri Pandits, Director Sarthi Gupta’s music video “Noor” features more than 500 residents of the restive state. It sends the message of “Kashmir Ghar Vapsi” or, homecoming to Kashmir, as well as standing tall in support of the people living there.

The video starts with a message that reads, “Over 7 Lakh Kashmiri Pandits were forced to leave Kashmir. Their houses were burnt, their temples were destroyed, hundreds of them were killed. Since 30 years, Kashmir Ghar Wapsi is dream for Kahmiri Pandits.”

Well-known for working towards the betterment of society, Gupta is also known for bringing the world together with his joint initiatives and social movements.

After attracting thousands of citizens in the jungle to clear plastic and making Indian forests clean, and removing 8,000 tons of garbage from the forests, which is equivalent to 800 truckloads of it, he has added another feather to his hat by presenting “Noor”.

“Lead main singer Ahmed Shaad Safwi and many Muslims from the film fraternity have dedicatedly worked towards making this video possible. More than 500 Kashmiris and Himachalis have been associated and will be seen in the film as well,” said the director in a statement.

“‘We stand with Kashmir and are united for Kashmir’ will be the takeaway from this video. I thank -Series for collaborating and all communities who made this project possible and the people of Jammu and Kashmir, Himachal Pradesh and Uttarakhand,” added Gupta.

The director says that the video can be an eye-opener for many.

He also says that after the scrapping of the special status of Kashmir through Article 370 of the Indian constitution in August, there is a new hope that the Kashmiri Pandits will be relocated and the injustice will be brought to an end.

The seven decades-old quasi autonomy had allowed the erstwhile State's legislature to make its own laws. It also banned people from outside the State from getting state government positions. Jammu and Kashmir is now federally administered Union Territory (UT) like any other State or UT.

In December 2014, the Government of India informed the Parliament that there are about 62,000 registered Kashmiri migrant families in the country.

"Due to onset of militancy in the state of Jammu and Kashmir in early 1990s, most of the Kashmiri Pandit families including some Sikh and Muslim families migrated from the Kashmir Valley to Jammu, Delhi and other cities in different states. At present there are about 62,000 registered Kashmiri migrant families in the country.