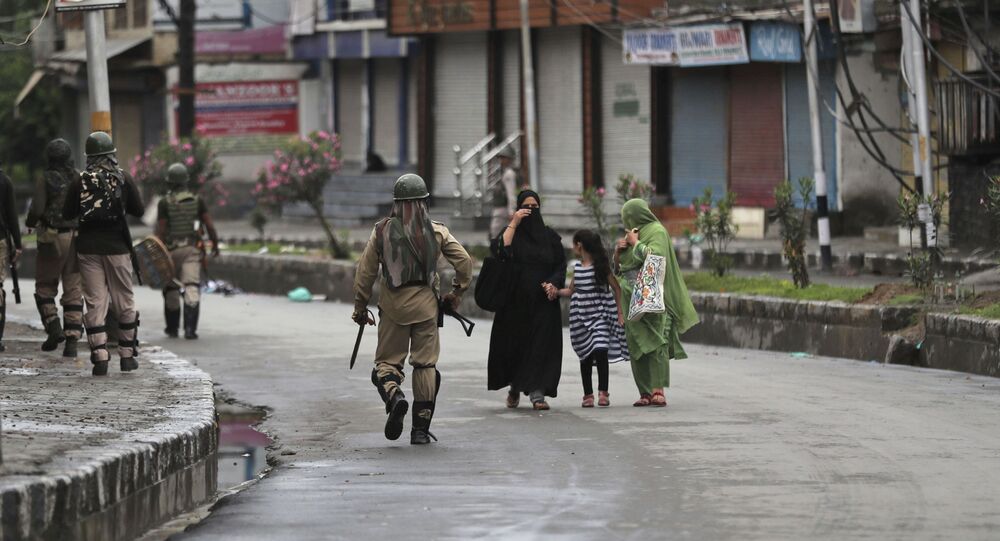 New Delhi (Sputnik): Terrorists based in India’s Kashmir Valley are now creating a maximum amount of fear and uncertainty in the minds of people through targeted "soft killings", an Indian political analyst told Sputnik on Thursday.

The murder of an apple trader and a brick kiln worker from the Indian states of Punjab and Chhattisgarh, respectively, in two separate attacks on Wednesday reflected a “tactic to ensure that normalcy doesn’t return to Jammu and Kashmir State in any way”, Sushant Sareen, Senior Fellow at the Observer Research Foundation (ORF), a New Delhi-based think tank, told Sputnik in an interview.

Wednesday’s terror attacks in the Kashmir Valley’s Shopian and Pulwama districts have increased the civilian death toll to three since Monday, ringing alarm bells within the local business community and among businesses outside the region.

So deeply ingrained is the feeling of fear that small business proprietors and truck drivers are now reportedly fleeing the Kashmir Valley without collecting their consignments.

“Wednesday’s terror strike must not be seen as a random act. Terrorists are now identifying soft targets to instil fear in people, the objective being to achieve 'maximum impact for minimum order'. This terror attack is not an ordinary, random act,” Sareen said.

“Once you start targeting people from other parts of the country who come as tourists or for a business engagement, or for a pilgrimage; who actually have no real connection with the ongoing happenings in Kashmir, they will stop going or coming, and this will have a debilitating impact on the region’s economy and the well-being of the local people,” he went on to say.

When asked if Wednesday’s attacks represent a resurgence of attacks of the 1980's and the 1990's in Kashmir, which led to the mass exodus of the Kashmiri Pandit community, Sareen said: “Targeted killings aren’t limited to India.”

“They do take place in other parts of the world. For instance, in Pakistan, in the aftermath of the 2007 Lal Masjid siege, we have seen and heard of targeted killings occurring in that country’s Federally Administered Tribal Areas (FATA).”

One of the victims of the latest terror strike has been identified as Punjab-based Charanjeet Singh. He was killed while on a business trip Kashmir’s Shopian district. Another was Sethi Kumar Sagar, a Chhattisgarh state resident employed in a brick kiln in the state’s Pulwama district. He was killed near a railway station.

A third person was Sanjeev Singh, an aide of Charanjeet Singh. He was critically injured in Wednesday’s attack.

Police said one of the assailants was suspected to be from Pakistan.

Asked how the Indian government should respond, Sareen said: “… Terrorism will not end anytime soon. We, as in most countries, are still in search of effective ways to counter insurgency, to stop it. We have to accept that there is no quick-fix solution to neutralise this menace. It will happen again and we just have to be aware and alert.”

Wednesday’s killings came two days after a truck driver identified as Sharief Khan was killed. As many as 15 people have been detained in response to the attack. Police in south Kashmir said the killings are part of a strategy used by terrorists: to strike at the trading community, which so far had refused to be cowed down.

Relations between India and Pakistan have been tense for decades. Relations between the two nuclear-armed nations dipped to a new low in February this year after New Delhi pinned blame on Islamabad for sponsoring Pulwama terror attack (14 February) in Kashmir claimed by terror group Jaish-e-Mohammad.

India carried out a retaliatory strike to destroy the banned group’s infrastructure across the border in Pakistan’s Balakot area, only to be followed next day by a dogfight between Indian and Pakistan forces.

The Kashmir issue dates back to 1947, when both countries became independent from Britain. Both rule part of the Kashmir region, but claim the entire region in full.

(Views and opinions expressed in the article do not necessarily reflect those of Sputnik).