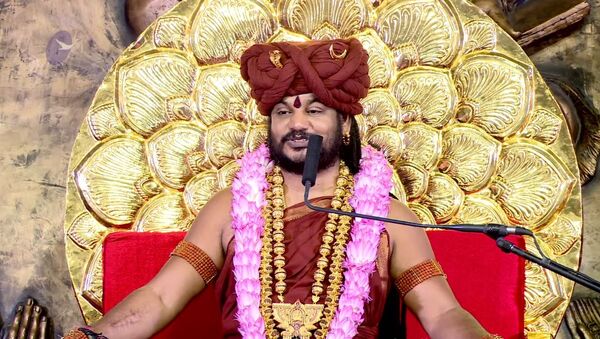 New Delhi (Sputnik): The Gujarat police said Nithyananda escaped from the country after a rape case was brought against him in Karnataka.  A US citizen had earlier accused the 42-year old of raping her for over five years on the pretext of spirituality.

In a bizarre development that shocked Indians on Tuesday, self-styled 'Godman' Swami Nithyananda has reportedly established his own island nation in South America. He fled India last month to escape rape charges.

“Kailaasa is a nation without borders created by dispossessed Hindus from around the world who lost the right to practice Hinduism authentically in their own countries,” reads the introduction on the website Kailasa.org.

Nithyananda also released a sample ‘passport’ for Kailasa- an island near Ecuador.

The website claims that the "new nation" offers a temple-based ecosystem, science behind the third eye, yoga, meditation, and Gurukul education system. Sputnik could not independently verify whether the claim was true.

As per the report the new nation will provide “a safe haven to all the world’s practicing, aspiring or persecuted Hindus, irrespective of race, gender, sect, caste, or creed, where they can peacefully live and express their spirituality, arts, and culture free from denigration, interference and violence”.

Some local journalists reported that Nithyananda has asked the UN to recognise his island as a country.

The self-proclaimed island nation also has a constitution based on the 'Santana Dharma’.

​The Gujarat police recently said Nithyananda escaped from the country after a rape case was registered against him in Karnataka. “Since he was a key accused in the case, he would be arrested on his return to the country.” His two disciples have been held and are being questioned over rape accusations.