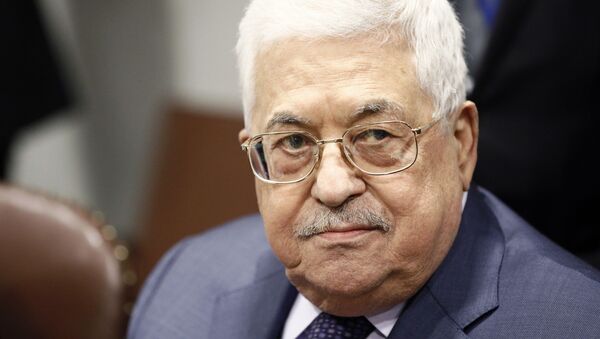 Israeli Prime Minister Netanyahu earlier pledged to ensure the extension of Israeli sovereignty to the Jewish settlements of the Jordan Valley after US Secretary of State Mike Pompeo said that these settlements were not illegal.

The Palestinian authorities will turn to the International Criminal Court (ICC) and completely break off relations with Israel if it passes the law on the annexation of the Jordan Valley, Palestinian President Mahmoud Abbas said in an interview with Russian journalists.

"As for [Israeli Prime Minister] Benjamin Netanyahu’s intention to pass a law on Israel’s annexation of the Jordan Valley, we are closely monitoring his steps in this direction. If the Israeli premier really does something like this, we will turn to the UN, the International Criminal Court, and we’ll finally and irrevocably sever all relations with Israel," Abbas stressed.

Abbas also said that the Palestinian leadership is taking decisive steps to counteract the White House’s stance on Israeli settlements voiced by US Secretary of State Mike Pompeo and is ready to completely break off relations with the White House.

"The Palestinian leadership does not intend to stand aside from what is happening. Last week, we began our consultations with political forces on the steps that should be taken to counter the position taken by the Americans, we are even ready to break off completely all relations with them, " Abbas said.

The Palestinian National Authority (PNA) will not allow Tehran to meddle in the country's internal affairs and urges Iran to directly engage in a dialogue with the legitimate Palestinian leadership instead of cooperating with separate groups and factions, Palestinian President Mahmoud Abbas stated.

"Iran has issues with some Arab States. And we, in turn, are monitoring what is happening. We are also watching what is happening in a number of other countries in the region, including Lebanon, Iraq, Iran, Algeria. There are problems everywhere. But we are just watching. Why? Because we decided not to interfere in the affairs of others. And we will not let anyone meddle in ours. When one state wants to interfere in the internal affairs of another one, we will not allow it. And we will prevent Iran from interfering in our affairs. The unrest is ongoing there. That is their business," Abbas said.

Regional media repeatedly reported that Tehran provides support to Palestinian factions and movements, such as Islamic Jihad group and Hamas. Abbas stressed that avoidance of direct contacts with the PNA by Tehran undermined the unity of the Palestinian people and hindered the process of national reconciliation.

"We had normal relations. But after that, Iran has started a different course, that is, it has not engaged directly with the legitimate Palestinian authority. It interacted with groups, factions. For example, with Islamic Jihad and Hamas. We do not accept this approach ... There are no problems between us and Iran. However, we demand that Iran work with the legitimate Palestinian authority, and not with factions and groups, as it pushes split in the Palestinian life," Abbas concluded.

At the same time, the Palestinian leader added that Palestine and Iran had had diplomatic relations for the past 40 years, and there was a Palestinian Embassy successfully functioning in Tehran.

On Elections in Palestine

General elections in the country will be held as soon as the Hamas movement gives its consent and irrespective of the Israeli position on the matter, Abbas said.

"The elections will be held if Hamas gives its consent. After that, we will conduct appropriate contacts with the Israelis, but we strive to decide on general and then presidential elections as soon as possible regardless of Israel's position. We know that the whole world is on our side, we heard it on the sidelines of the United Nations, in Europe, in Moscow, which expressed to us full support and readiness to send observers," Abbas said in an interview to Russian reporters.

According to Abbas, the Palestinian National Authority is actively contacting with the Hamas leadership on the issue of the upcoming elections, while new meetings between the parties will take place in the near future.

General elections in Palestine were expected in 2014 and 2018 but failed both times due to the row between Hamas and the Fatah movement, which is governing the West Bank.

During the 74th UN General Assembly, Abbas expressed his intention to hold a democratic election in all Palestinian territories, including the Gaza Strip, which has been controlled by Hamas for the past 12 years. The date for the election has not been set yet.

On Ties with Russia

Palestine sees Russia as one of its key "friends" since this country has always been "on the side" of the Palestinian people, President Mahmoud Abbas said in an interview with Russian media, timed to the 45th anniversary of the establishment of diplomatic relations between the two nations.

"We consider Russia one of the main friends of the Palestinian people, we do not need to specifically turn to it for support on international platforms since it has always stood and stands on the side of our people," Abbas said.

According to the Palestinian leader, the history of these bilateral relations dates back to 1968, even before Moscow’s recognition of Palestine.

"Many may be unaware of this, but it was that year when late Egyptian President Gamal Abdel Nasser privately brought [first PNA President] Yasser Arafat with him to Moscow to get him acquainted with the Soviet leadership. This really happened, the Palestinian leader outlined the vision of the problem, and from that moment we can talk about the establishment of contacts between the Soviet and Palestinian leaderships," Abbas pointed out.

He noted that "it was not advertised for some time until diplomatic relations were officially established 45 years ago."

"The truth is that from the very beginning, we were completely satisfied with how our relations were developing — first with the Soviet Union and then with the Russian Federation. They have always been smooth and have never — either in the Soviet era or now — undergone any changes," Abbas said.

The president himself paid his first visit to the Soviet Union back in 1979, several years after the two nations officially established diplomatic relations.

He added that relations were steadily developing until the collapse of the Soviet Union, followed by a one-two years of certain "mess, which ultimately did not impact" the ties. Under Russian President Boris Yeltsin, the two countries therefore continued maintaining regular contacts, according to Abbas.

"From the moment Vladimir Putin came to power to the present time, our relations continue developing and strengthening relations in the political, economic and cultural areas. Thousands of Palestinian students had been trained in Soviet and then Russian universities; cooperation is developing fruitfully," the Palestinian president said.

He added that Palestinians would be happy if Russian President Vladimir Putin accepts an invitation to visit Bethlehem this Christmas.

“We have sent an invitation to Vladimir Putin to visit us in the near future, namely in Bethlehem, in particular, during the Christmas holidays. We will be very happy if he accepts our invitation, it will be a great honour for us," Abbas said.

The Soviet Union and Palestine officially established diplomatic relations in 1974, when the Palestine Liberation Organization (PLO) opened its office in Moscow.