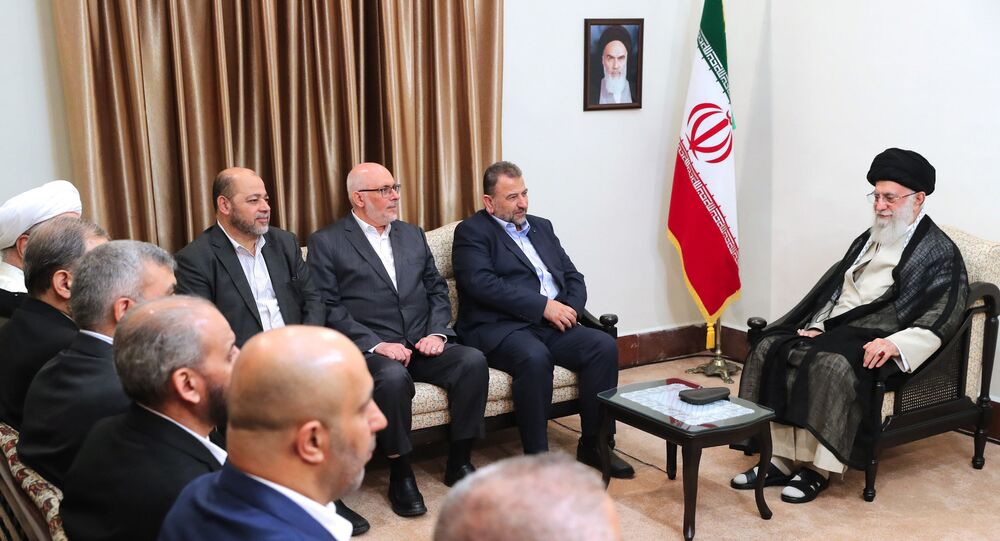 During a recent visit by a Hamas delegation to Tehran, leaders of the militant group secured a big funding increase, if they agree to open a second front against Israel if it attacks a northern neighbor. However, Hamas has made little headway in seeking Iranian help restoring severed relations with Syria.

Hamas, the Palestinian militant group that has governed the besieged Gaza Strip since 2006, secured a big funding increase from Iran last month when its leadership paid a visit to the Iranian capital.

According to a report by Israel’s Channel 12 News, the Iranian government increased its funding for Hamas from $100 million per year to $30 million per month, or roughly $360 million per year. However, in exchange, Hamas must provide Tehran with intelligence on Israeli missile systems and agree to open a second front against Tel Aviv, should it attack one of its northern neighbors in an all-out offensive.

“The good relationship between Iran and Hamas is an awareness and important news,” Kamal Kharrazi, head of Iran’s Foreign Policy Strategic Council, told reporters at a July 21 meeting with the Palestinian delegation, Mehr News Agency reported. “This relationship is expanding, and Hamas has high capabilities to increase resistance. This trip per se indicates the continuation and sustainability of the Palestinian cause and the Islamic Republic's support for it.”

“We are on the same path as the Islamic republic — the path of battling the Zionist entity and the arrogant ones,” Deputy Head of Hamas Political Bureau Saleh al-Arouri said at the time, according to Fars News Agency. He was accompanied on the trip by other Hamas leaders, including Moussa Abu Marzouk, Maher Salah, Husam Badran, Osama Hamdan, Ezzat al-Rishq and Ismail Radwan.

“We received all kinds of possible support from Iran on the ground,” Arouri said.

Dr. Yossi Mansharof, Iran and Shi'ite militias expert at the Jerusalem Institute for Strategy and Security and the Ezri Center of Haifa University, told the Jerusalem Post for a Tuesday article that Tehran had likely also increased its funding for Palestinian Islamic Jihad (PIJ), another militant group in Gaza with a similar pedigree to Hamas.

“We see that the connections between Iran and PIJ are very tight, since the leader of the group Ziad Nakhaleh is very close to Soleimani,” Mansharof said, referring to Maj. Gen. Qassem Soleimani, who heads Iran’s Islamic Revolutionary Guard Corps’ elite Quds Force. “So it can be assumed that the group would also get an increase in funding.”

However, the academic told the Post he thought the deal was one-sided: “I have the impression that neither Iran nor Hezbollah would help Hamas – not [with] more than smuggling," he said. "Hezbollah doesn’t want to be attacked by Israel and sacrifice their missiles for Hamas and the Palestinians. Iran also wouldn’t want to have their facilities attacked by Israel for them assisting Hamas.”

During a meeting with al-Arouri, Iran’s Supreme National Security Council President Ali Shamkhani denounced the United States’ lackluster “Deal of the Century” for peace in the Middle East as “a failed plan,” Middle East Monitor reported at the time.

“We are sure that the Islamic Republic of Iran will spare no efforts to prevent such a deal from taking place with its stances and its regional and international influence,” al-Arouri said.

Iran previously slashed funding for Hamas after the group cut ties with Iranian ally Syria, following the outbreak of civil war there in 2011. Damascus, in turn, denounced Hamas as a terrorist group that backed anti-government forces in Syria.

Hamas reportedly still seeks Tehran’s help in repairing relations with Syria. When they first indicated a willingness to bury the hatchet in 2016, Syrian President Bashar al-Assad denounced the idea in no uncertain terms.

The Shiite Alawite-dominated secular government of Damascus has long been at odds with the Sunni Brotherhood, from which both Hamas and PIJ once splintered. In 1982, the Brotherhood launched a major uprising in the Syrian city of Hama, which the Syrian army put down, with thousands of people killed as a result. Following the outbreak of the civil war, the Brotherhood dominated the rebel Syrian National Council government-in-exile, and many Commission for Civilian Protection self-defense forces formed by pro-Brotherhood activists in the county eventually affiliated with the al-Qaeda-dominated Free Syrian Army, Foreign Policy reported.

This past June, another attempt by Hamas at extending an olive branch was rebuffed when the president’s office republished Assad’s 2016 comments.