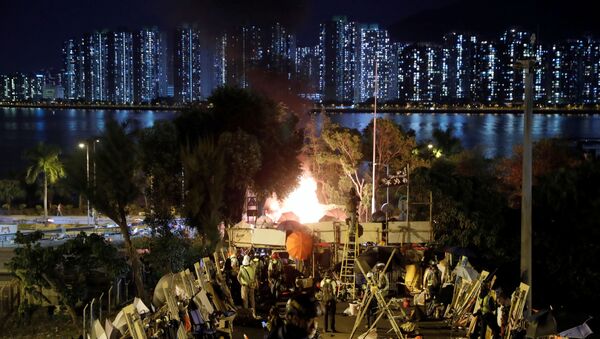 © REUTERS / Thomas Peter
Subscribe
Ekaterina Blinova
All materialsWrite to the author
Protests have been rocking the semi-autonomous city that returned to Chinese rule in 1997 since early June 2019. Beijing-based author Thomas W. Pauken II has explained why the protesters are shooting themselves in the foot by refusing to compromise on "five demands" and why Hong Kong may lose its status as a financial hub.

On 19 November, city authorities managed to bring an end to a stalemate with hundreds of protesters who had occupied Hong Kong Polytechnic University (PolyU) since last week.

The protests started in March 2019 over a local government-proposed mechanism to extradite fugitives to mainland China. Although the semi-autonomous city's authorities suspended the bill on 15 June, demonstrations turned violent disrupting businee in Asia's most prominent financial hub.

·         full withdrawal of the currently suspended extradition bill that triggered the protest movement in March 2019;

·         the establishment of a commission to conduct an independent inquiry into alleged police brutality;

·         revoking the classification of protesters as “rioters”;

·         the implementation of universal suffrage for both the Legislative Council and the Chief Executive.

Meanwhile, it appears that the city's High Court isn't making it any easier for law enforcement to sort the mess out. The court recently struck down a month-old mask ban prohibiting residents from wearing face masks during demonstrations that was previously introduced by the Hong Kong government. In response, Beijing has argued that it's up to the Standing Committee of the National People’s Congress to decide whether the laws of the Hong Kong Special Administrative Region comply with the Basic Law of Hong Kong.

HK Protesters Shooting Themselves in the Foot

According to Beijing-based political commentator Thomas W. Pauken II, the author of US vs. China: From Trade War to Reciprocal Deal, the months-long protests are likely to bear bitter fruit for the city's status as a major economic hub giving room to other rapidly growing Chinese financial and technological centres.

"Hong Kong’s imminent demise will lead to boom times for Chinese cities - Shenzhen and Shanghai", Pauken suggests. "As Hong Kong burns, more businesses and residents will flee the city and move to mainland China in search of a better future for them. Hong Kong will lose its status as the financial hub for the Asia-Pacific region, while Shanghai and Singapore will play more central roles in the international banking and finance sectors. Shenzhen will attract more science and hi-tech firms from the Hong Kong SAR (Special Administrative Region)".

Since the Hong Kong protests turned violent in June 2019, the city's benchmark stock index, the Hang Seng Index (HSI), has plummeted about eight percent. The turmoil has hit almost all of the city's economic sectors, seriously undermining tourism and real estate prices, dragging Hong Kong into a recession.

Investors from mainland China are now buying up Hong Kong stock market equities. According to The Wall Street Journal, they have bought nearly $20 billion worth of Hong Kong stocks since June 2019.

Beijing Will Wait HK Protests Out

Pauken, commenting on the possible ways of settling the growing tensions between Hong Kong and mainland China, presumes that "Beijing will just wait it out" allowing the semi-autonomous city's authorities to handle the situation.

The Beijing-based author notes that the protesters continue to escalate tensions by refusing to compromise on their five demands.

"They insist the Hong Kong Chief Executive Carrie Lam and the Legislative Council must accept all ‘Five Demands’ before halting the violence", Pauken says. "But some protesters have committed murders, arsons, violent assaults, looting and damaging properties; but they call for the regional government to grant amnesty for all protesters and those arrested to have their criminal records expunged from their public records. That’s not a reasonable request. To allow murderers, arsonists and looters to avoid punishment, just by calling themselves 'democracy lovers' would send a dangerous message and spark deeper social instability in the city".

As for Washington's attempts to interfere in the situation by passing the Hong Kong Human Rights and Democracy Act, the commentator views it as "empty symbolism to appease the high numbers of anti-China American voters".

"Beijing is smart, they are not going to over-react with bullying just because US lawmakers want to say that Hong Kong riots are 'a beautiful sight to behold'", Pauken emphasises.

000000
Popular comments
The rioters have overestimated them self Largely !!! Justice will be don and the murders will stay in jail for live !! and that is good !!! The brave rioters wetting there pants mow and more !!! Justice have com !!! Bravo HK Police and China !!