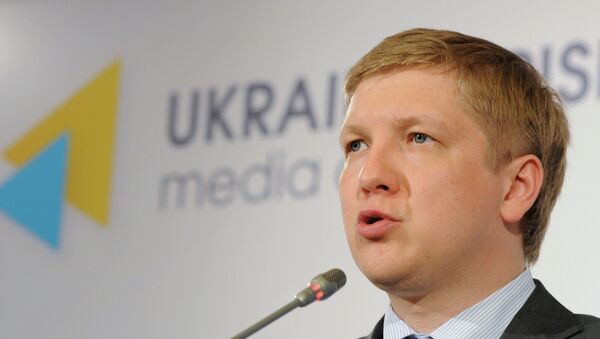 The CEO of Ukraine's energy giant Naftogaz, Andriy Kobolyev, is, if asked, reportedly ready to testify in the federal US probe launched by investigators earlier this year against US President Donald Trump's lawyer, Rudy Giuliani, over alleged financial campaign violations and illegal lobbying.

Asked by Time whether, if invited, he is prepared to give US prosecutors information in a closed-door testimony about Giuliani or the ex-mayor's notorious "fixers" Lev Parnas and Igor Fruman, the Naftogaz executive said that “both. Everything is connected”.

“I will with a high likelihood be invited to testify in this case [...] If I am called, I would be willing to come and testify”, Kobolyev said, cited by Time.

The case against Giuliani and his associates will reportedly be held separately from the impeachment probe against Trump launched in September by House Dems, but many details allege a solid connection between both investigations.

According to Time, the Naftogaz CEO could shed light on recent allegations from US and Ukrainian energy executives that Parnas and Fruman tried to use access to Giuliani and the Trump administration as a means of replacing Naftogaz leadership, which had resisted US efforts to land a lucrative gas deal in Ukraine.

Apart from seeking gas deals in Ukraine, Fruman and Parnas are alleged to have fixed arrangements to investigate Biden business dealings in Ukraine, a core plot of the Trump impeachment inquiry.

In October, US federal prosecutors unsealed an indictment against Fruman and Parnas and two other people - David Correia and Andrey Kukushkin - for funneling $1 million in donations from foreign nationals to unspecified political campaigns in the United States.

The four are accused of donating money to an unnamed member of Congress and then pressing that lawmaker to remove or recall the then-US ambassador to Ukraine.

Parnas and Fruman are reported to have met with former Ukrainian President Petro Poroshenko in February 2019, allegedly offered a one on one meeting with Trump in exchange for an investigation into former US Vice President Joe Biden and his son Hunter and their business ties to Naftogaz.

Charges against Giuliani have not yet been finalized.

House Democrats allege that Trump pressed Ukraine President Volodymyr Zelensky to open a probe into the Bidens by withholding nearly $400 million in US military aid - a charge Republicans deny, pointing to the remittance of payments several weeks prior to the Trump's 25 July request, even though Ukraine never launched a Biden investigation.

Trump declassified what the White House claims is the full, unedited transcript of his telephone call with Zelensky. The president denied wrongdoing in his dealings with Ukraine. Trump has described the impeachment inquiry as another political "witch hunt".