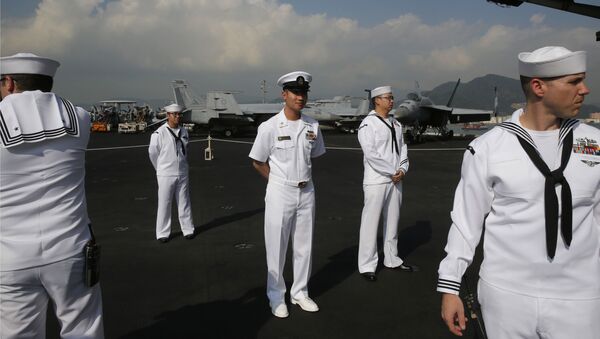 Washington continues to aggravate tensions in the South China Sea by sending two littoral warships in the region. The US seeking to maintain the upper hand in the disputed waters regardless of Beijing's warning against muscle-flexing in the area.

The US has dispatched two Independence-class vessels, the USS Gabrielle Giffords and USS Montgomery, to the South China Sea, while US Defence Secretary Mark Esper has vowed to proceed with freedom of navigation missions in the disputed waters.

In a press briefing Tuesday, Esper called upon claimant nations in the South China Sea to safeguard their interests in the region: "I think it's incumbent upon all of us to take a very public posture and to assert our sovereign rights and to emphasise the importance of law", he said.

China claims almost all of the South China Sea. The other claimants to the area include Brunei, Taiwan, Indonesia, Malaysia, the Philippines, and Vietnam.

US Seeking to Maintain Dominance in South China Sea

Chen Xiangmao, a research fellow at the National Institute for the South China Sea, is doubtful that Washington will lend a sympathetic ear to Beijing stressing that the US is seeking to maintain dominance in the region.

Under President Donald Trump, Washington has carried out more "freedom of navigation" operations in the region than the Obama administration during its entire eight years.

Pavel Zolotarev, a military analyst at the Institute for US and Canadian Studies, a Russian think tank that is part of the Russian Academy of Sciences, predicts that this trend will strengthen in the foreseeable future.

"The US is seeking to secure the freedom of action in any region", Zolotarev opines. "The main element in the projection of force is the US Navy, and the actions of the US Navy constitute the main problem for China".

​Chen Dewey, the Chinese Navy's official spokesman, elaborated that the aircraft carrier conducted “research and routine training” in this area, something that is a “normal practice” during such tests. He refuted the assumptions that the vessel had any particular target stressing that its passage had nothing to do with the current situation in the region.