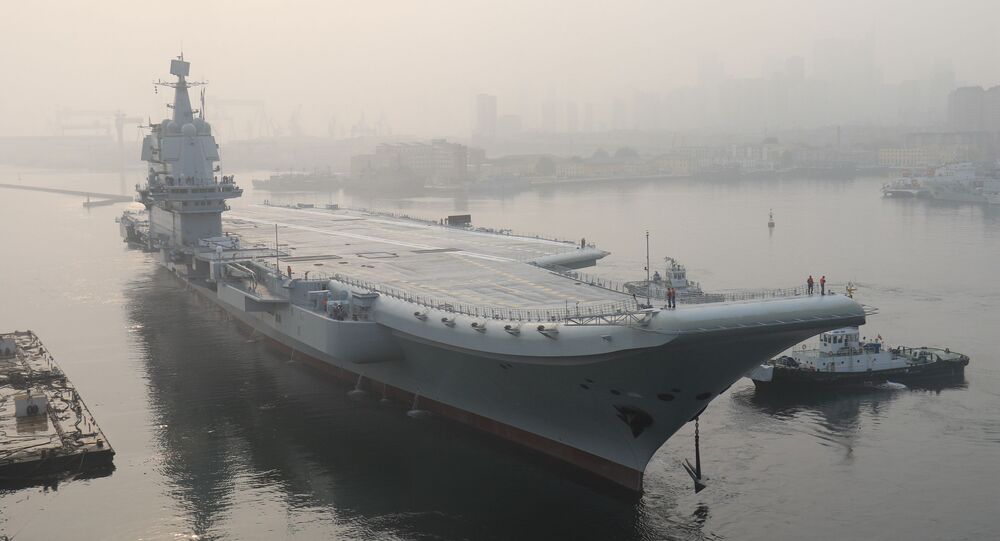 On Sunday, the Taiwanese Ministry of National Defence reported that China's first domestically made aircraft carrier sailed through the Taiwan Strait, shadowed by several US and Japanese warships.

Beijing has warned the US and Japan not to create obstacles to drills conducted by the Chinese People's Liberation Army (PLA)’s Navy.

"I want to note that a detachment of Chinese warships conducted regular exercises at the country’s doorstep, and that there is no need to make such noise about it,” Gen said.

At the same time, he said that he would like to emphasise that “these activities of the Chinese side comply with international law and practice.”

“We demand that the relevant sides completely stop any interference in the usual military activities of China,” Gen said when asked to comment on the presence of US and Japanese in the water area, where Chinese naval drills were taking place.

The statement comes after Taiwanese Ministry of National Defence reported on Sunday that China's first domestically built aircraft carrier, known as Type 001A, passed through the Taiwan Strait, where she was followed by several US and Japanese military vessels.

The strait divides Taiwan from mainland China which considers the Southeast Asian nation to be an essential part of the country. Bilateral ties were cut in 1949 after the remnants of Chiang Kai-shek's forces fled to the island following their defeat on the mainland. In the 1980s, the relations were partially restored.

The information about the Chinese aircraft carrier sailing through the Taiwan Strait has meanwhile been confirmed by PLA spokesman Cheng Dewei who said that the vessel had completed “research tests and routine military exercises in the appropriate waters of the South China Sea.”

Apart from China, the Spratly Islands and Paracel Islands, which are among the more frequently disputed territories in the South China Sea, are also claimed by the Philippines, Brunei, Malaysia, Taiwan, and Vietnam. China has exerted de facto control over the Paracels since 1974.