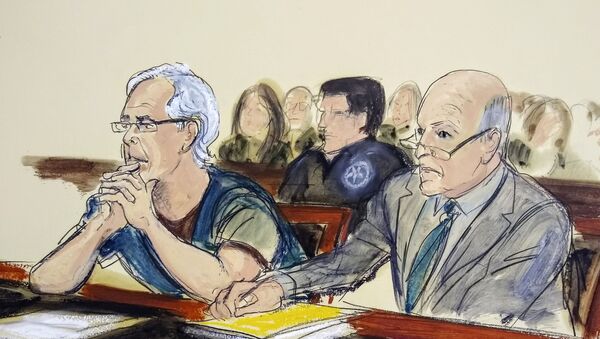 While the mysterious death of billionaire investor and convicted sex offender Jeffrey Epstein has sparked speculations on whether he really killed himself, revelations about the dishonoured financier's connections keep on coming.

Well-known Norwegian politicians have had contacts with the late financier Jeffrey Epstein, whose federal charges in the sex trafficking of minors cast a dark shadow on many public figures, the newspaper Dagens Næringsliv reported.

Rød-Larsen has led the New York-based International Peace Institute (IPI) since 2004. Under his leadership, IPI received $375,000 from Epstein's Gratitude America (GI) in 2016 and 2017. The contributions were not made public at the time, and came to light only later after a review of GI. At that time, it was already well-known that Epstein was a registered sex offender. He was convicted of this in 2008.

Dagens Næringsliv stressed that Rød-Larsen's IPI  had been given over twice as much as the prestigious Massachusetts Institute of Technology (MIT) in 2017.

Earlier this autumn, MIT official Joichi Ito stepped down after the disclosure of his efforts to conceal his financial connections with the disgraced financier. He also left the boards of three other organisations, as well as his professorship at Harvard.

Norway's former Christian Democrat Prime Minister Kjell-Magne Bondevik said he was present at a dinner with Epstein where Rød-Larsen also participated. By his own admission, Bondevik also received support offers from Epstein for his foundation the Oslo Centre, whereupon they arranged a meeting to discuss the details. Bondevik, however, checked the financier's background.

“It was simply stated that he was convicted and jailed for assaulting young girls, not just one, but many”, Bondevik told Dagens Næringsliv.

Earlier this month, the Norwegian newspaper Aftenposten revealed that Epstein gave US President Bill Clinton a lift to Norway in his private jet often referred to as the Lolita Express for a meeting with Bondevik to promote the Clinton Foundation, where Norway emerged as one of the biggest donors.

Norwegian Foreign Minister Ine Eriksen Søreide stressed that other recipients of money from Epstein's foundations have chosen to spend the money “on a good cause” and urged IPI to consider doing the same.

While Rød-Larsen has declined to comment on the matter personally, IPI said it intends to donate a sum corresponding to the funding it received from Jeffrey Epstein to programmes that support the victims of human trafficking and sexual abuse, Dagens Næringsliv reported.

Terje Rød-Larsen is best known for his key role in the Oslo Agreement. Between 1999 and 2004, he served as UN Special Coordinator for the Middle East Peace Process and the Secretary-General's personal representative to the Palestine Liberation Organisation and the Palestinian Authority.

Epstein rubbed elbows with a number of powerful people, such as Bill Clinton and Donald Trump. In recent weeks, Britain's Prince Andrew has also landed hot water over his ties to the disgraced billionaire.

In July, Jeffrey Epstein, a registered sex offender, was arrested for the alleged sex trafficking of underage girls at his mansion. While pleading not guilty, he was facing up to 45 years in jail if convicted.

His death at the Metropolitan Correctional Center in New York, while officially ruled suicide, was widely disputed and has since sparked an avalanche of memes.