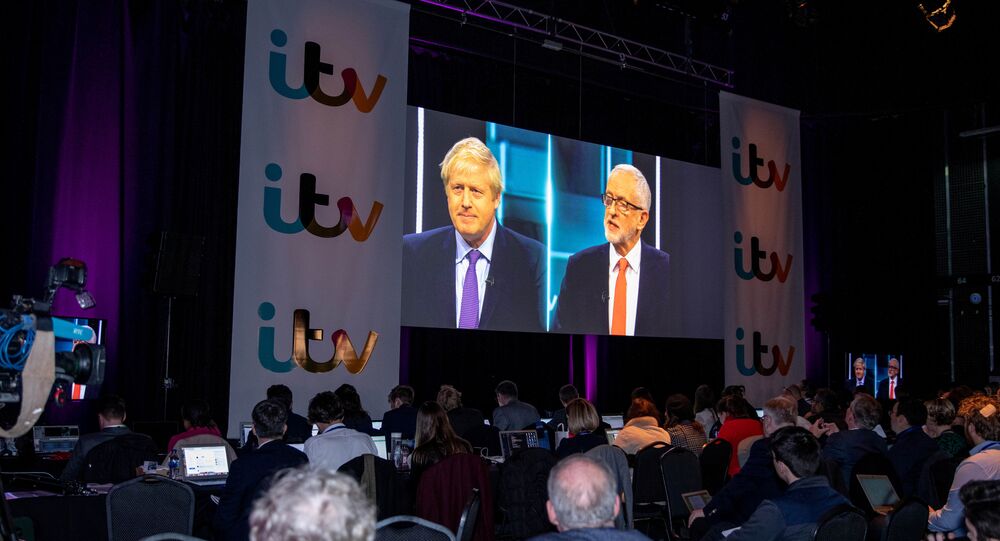 Tuesday witnessed the first face-off between Conservative Party head Boris Johnson and Labour Party leader Jeremy Corbyn. The two sparred over Brexit, the NHS, the economy, trust in politics, Jeffrey Epstein, and the monarchy in the first televised debate of the election campaign.

Jeremy Corbyn has stirred up another anti-Semitism row with Twitter user criticising the Labour Party leader for his pronunciation of Jeffrey Epstein's surname, accusing him of deliberately making the paedophile’s name sound “more Jewish.”

As the two rivals answered questions on Prince Andrew’s friendship with disgraced billionaire Jeffrey Epstein – an issue that has been in the media spotlight recently - both expressed sympathy for the victims of the convicted sex offender who purportedly killed himself while facing trafficking charges.

While Boris Johnson pronounced Epstein’s surname correctly, Corbyn made it sound like “Ep-schtine”, giving it what has been described as a “Germanic twist.”

Is Prince Andrew fit for purpose?

Here's what Johnson and Corbyn had to say when asked about the Queen's son and his relationship with Jeffrey Epstein #LeadersDebate pic.twitter.com/4jRfrU77YF

Okay am I being totally ridiculous here or does calling him "EpSHtein" make him sound more Jewish?

When Twitter user Alec Feldman speculated that Corbyn, whose party has been fending off accusations of anti-Semitism, had made Epstein sound “more Jewish", comedian David Baddiel tweeted:

“Every Jew watching noticed that.”

Every Jew watching noticed that. https://t.co/mKH9zHvNDl

The response from viewers at home was prompt.

Some people leapt to the politician's defence, claiming this pronunciation of Epstein’s name was the “German way.”

Would you not pronounce it like this if you have a basic knowledge of German? Nothing sinister

Sounded more German to me. Still weird that he did it when it's more commonly pronounced steen or stine though

maybe he's always pronounced it like that? Now he can't pronounce the name correctly without being criticised?

​Others were quick to brand Corbyn an anti-Semite.

To the idiots saying “we should pronounce things the way they are spoken in their country” - He was an AMERICAN. He was born in New York. He wasn’t German or generic “Jew” - he was American & his name was Epstein. Corbyn tried to emphasise aliens. He otherised Jews. Again

Has anybody other than Jezbollah ever pronounced 'Epstein' as 'Epsssccchtein'. Just making sure we all knew he was a Jew, maybe? #ITVDebate

​Others on social media were left perplexed.

My history teacher (not Jewish) always pronounced Albert Einstein as Einshtein. We were told it was respecting the origin of the name

Me too! I was taught it that way in France. We learnt to say foreign names correctly. I'm so confused about this conversation!

The Labour Party has been consistently facing allegations of anti-Semitism. Jeremy Corbyn has rejected the accusations, pledging to redouble efforts to fight anti-Semitism within his party's ranks.

The current incident unfolded during the debate as Johnson and Corbyn refused to back Prince Andrew when asked whether he was fit for purpose in light of the Epstein scandal and the resulting allegations.

During a quickfire round in the last segment of the debate the two party leaders were asked about the Duke of York, who has been facing heavy criticism this week over his friendship with paedophile financier Jeffrey Epstein.

The host of the leadership debate in Salford, Julie Etchingham posed the question:

“Is Prince Andrew fit for purpose?”

“All our sympathy should be with the victims of Jeffrey Epstein and the law must certainly take its course.”

“Before we discuss Prince Andrew, I think we should discuss the victims that are there because of what Epstein was doing and I think there are very, very serious questions that must be answered and nobody should be above the law.”

The question had followed an earlier one sent in by a viewer at home that was: “Is the Monarchy fit for purpose.”

Corbyn said that it “needs a bit of improvement” as Johnson followed with “the institution of the monarchy is beyond reproach”.

Earlier, Queen Elizabeth’s second son the Duke of York appeared in what has been branded a “car-crash” interview with the BBC’s Newsnight to give details about his relationship with the late convicted sex offender Jeffrey Epstein and address allegations about sex with a teenage girl.

© AFP 2020 / LILLIAN SUWANRUMPHA
In this file photo taken on November 03, 2019, Britain's Prince Andrew, Duke of York leaves after speaking at the ASEAN Business and Investment Summit in Bangkok, on the sidelines of the 35th Association of Southeast Asian Nations (ASEAN) Summit.

The prince has been in the media crosshairs since allegations emerged about his controversial friendship with Epstein.

The member of the British monarchy has been emphatically rejecting all allegations levelled at him.

Who triumphed in the debate?

With just over three weeks until the general election in the UK set for 12 December, Prime Minister Boris Johnson and Labour leader Jeremy Corbyn sparred over Brexit, the NHS, the economy, trust in politics, the monarchy, and Jeffrey Epstein in the first televised debate of the election campaign.

Just hours before the TV debate kicked off, Johnson penned a letter to Corbyn with a list of four questions to answer regarding the latter's Brexit policy, a subject Johnson claims Corbyn has evaded.

A snap YouGov poll suggested the public were evenly split on who had won the debate, "with most Labour voters thinking Jeremy Corbyn won, most Conservative voters thinking Boris Johnson won."

Viewers think Boris Johnson was stronger during the #ITVdebate on Brexit (63% to Corbyn's 27%), while the Labour leader performed better on the NHS (54% vs 38%)https://t.co/begsQeyYOn pic.twitter.com/bu6MTmPoxG

A separate snap poll gave Corbyn an edge over Johnson, with 67 percent of respondents saying he did "well" in the debate, and 59 percent saying the prime minister did well.