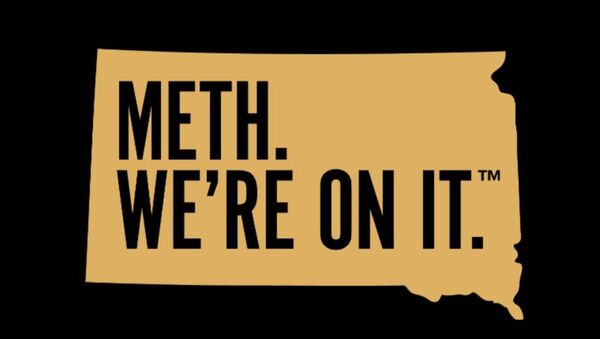 South Dakota’s governor is defending and doubling down on the state’s latest anti-drug campaign slogan that not only has a double entendre that netizens could not resist commenting on, but also apparently cost a pretty penny to develop.

South Dakota Governor Kristi Noem caught the attention of netizens on a local and national level on Monday as she and the state’s meth prevention program revealed its latest anti-drug campaign and its slogan: “Meth. We’re on it.”

"I'M ON METH" - This is the latest anti-meth campaign video from South Dakota 🤨 pic.twitter.com/38Dok1OLrI

“South Dakota’s meth crisis is growing at an alarming rate,” Noem said in the campaign’s Monday press release. “It impacts every community in our state and threatens the success of the next generation. It is filling our jails and prisons, clogging our court systems, and stretching our drug treatment capacity while destroying people and their families.”

The state’s public finances website revealed that ad agency Broadhead Co., based out of Minneapolis, Minnesota, was paid almost $449,000 this year alone to develop the campaign as part of their contract, which extends until May 31, 2020.

According to South Dakota Secretary of the Department of Social Services Laurie Gill, 83% of all controlled substance-related court admissions for the year of 2019 in South Dakota had to do with methamphetamine.

While the facts related to South Dakota’s methamphetamine epidemic are clearly laid out on the campaign website, the video advertisement that encourages “everyone to get on it,” in reference to combating the crisis, and the accompanying advertisement images did not go over well with many netizens who believed the state missed the mark on awareness and prevention.

The ONLY way this makes ANY sense is if “Parks & Rec” writers secretly replaced the campaign documents with their own pitch idea, and then wrote this speech for the governor to say we can all be on meth.

The state of South Dakota spent $500k on an ad campaign to let everyone know we’re on meth pic.twitter.com/TjAycDtjut

... i applaud any and all efforts to combat the health crisis caused by meth. but the slogan for south dakota's campaign has the potential to cause some unwanted methamphetamemes.https://t.co/TV1tU3xpz1 pic.twitter.com/cwyf0vhff5

Oh, no. It seems like the rest of South Dakota's anti-drug campaigns are just as bad as the "Meth. We're On It." campaign. pic.twitter.com/3BDnrvkoms

While some may have thought the state government would issue an apology, Noem has clapped back at those who oppose the campaign: in a Monday tweet that linked to the campaign website, she argued that “the whole point of this ad campaign is to raise awareness. So I think that’s working… #thanks #MethWeAreOnIt.”

A few others appear to be on Noem and the state government’s side and argue that the ad campaign is actually ingenious.

I hope you've all figured out that South Dakota's ad agency knows exactly what it's doing and you're giving them the attention they wanted? (If their slogan had been of the "Don't do meth; it's bad for you" ilk literally no one would be aware of SD's anti-meth campaign today.)

Am I the one person who’s ok with this?

I think it’s a good thing people are talking about it. Who cares if the catchphrase is stupid? I care more about helping those addicted.

I applaud people who legitimately are trying to make a difference.

Personally, I think there is brilliance in this campaign.

This is not the first time an awareness campaign in South Dakota did not go over too well with the public. The state’s 2014 “#DontJerkAndDrive” campaign - intended to combat one’s natural reaction to overcorrect or “jerk” the steering wheel while one’s car is sliding on a snowy and/or icy road - left more people giggling than the government expected.

This is a great sequel to 2014’s Don’t Jerk and Drive pic.twitter.com/xVbzWkSqOa

Perhaps realizing that awareness graphics stating “jerking isn’t a joke” and “think before you jerk” could possibly do more harm than good, South Dakota ended up pulling its “#DontJerkAndDrive” ads.

“I decided to pull the ad,” Trevor Jones, then-secretary of the Department of Public Safety, announced in a December 2014 statement. “This is an important safety message and I don’t want this innuendo to distract from our goal to save lives on the road.”

Only time will tell if the South Dakota Meth Prevention Program’s latest ads will suffer the same fate.